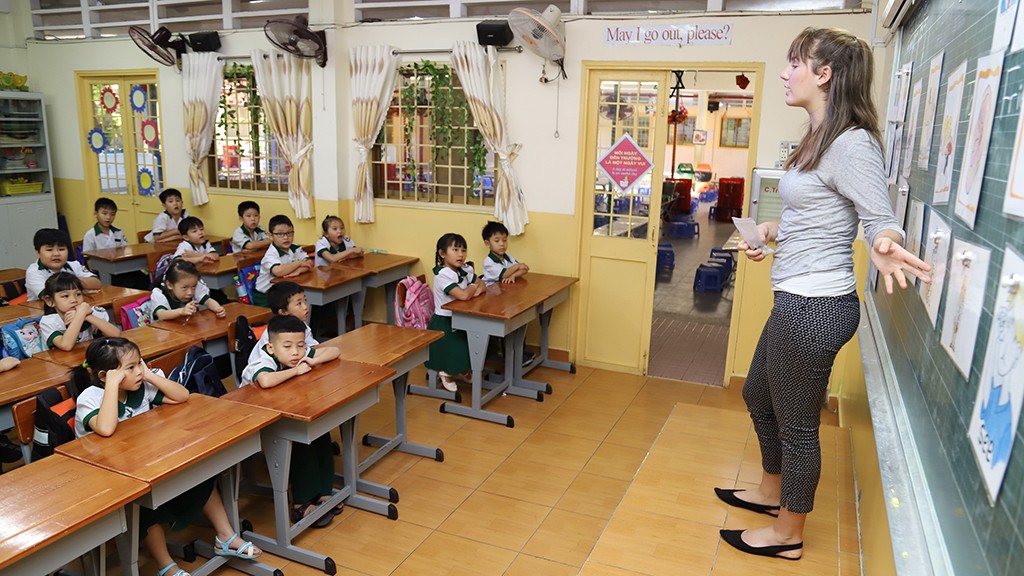 Editor's note: Mark Barnes is a freelance journalist currently based in Hanoi, Vietnam. In this piece sent to Tuoi Tre News, he explores how the novel coronavirus disease (COVID-19) pandemic, as well as the travel restrictions and school closures it entailed, has changed the landscape of English teaching jobs in Vietnam, nearly a month after the country emerged from weeks of social distancing in April.

When schools were given the all-clear to reopen at the end of April, it was clear that there would be a supply problem when it came to qualified English teachers.

Borders had been closed since the end of March to prevent the spread of COVID-19 and would not reopen for some time to come. As such, no new teachers were getting in, neither would teachers who had left during the school closure period be able to return.

At the same time, Vietnam’s 16 million or so students were returning to schools where English language classes are compulsory. That’s not to mention the hundreds of private English centers around Hanoi that had also been given permission to reopen.

This was greeted as welcome news for some English teachers in Hanoi.

Perceiving an obvious under-supply, many looked to take advantage of the situation.

“The demand curve is higher than the supply. Guys, PLEASE be smart and don't accept lower than $1,200,” one Filipino teacher posted in the ‘Filipino English Teachers in Vietnam’ group on Facebook.

But is this a realistic assumption?

One industry insider, a recruiter based in Hanoi, who wished to remain anonymous, says no.

He has been approached by many teachers requesting higher salaries, he says, adding these requests are “unreasonable."

He says the reality is schools and English centers are not yet desperate enough to pay higher salaries and that even if they were, they do not have the funds available to do so.

Another recruiter in Hanoi has also advised its staff that many public schools will be focusing on a Vietnamese curriculum for the remainder of the academic year. With reduced contact hours, English language lessons simply will not be a priority.

This situation is precarious and dynamic, but this may mean a number of previously employed English teachers will be looking for work in the coming weeks.

That said, the number of job ads on English teacher recruitment Facebook pages has exploded. Recruiters are looking for staff all over Vietnam, although many are specifically requesting “native” English speakers from the U.S., Australia, Canada, the UK, and New Zealand.

This may give teachers from these countries an edge. Native English speakers are generally paid higher wages, however, attitudes toward native versus non-native English teachers are changing.

Hong Tang, the founder of Coins For Change, an NGO that places volunteer English teachers in low socio-economic areas, says in many instances native English speakers are unnecessary.

But she points out that for older, more advanced learners, it is very difficult to develop further without the aid of a native speaker.

“You teach academic English, you teach writing, you teach public speaking or presentation [skills]. You need more words and you need to be able to teach people to use the language how native speakers do.”

For beginners, however, she says, it is a different story.

“The kids are learning very basic English. So basically you just need to be good at pronunciation, understand that grammar clearly, and understand how to interact with the kids,” she says.

She goes on to say this last point is crucial.

“I know some people who come to teach and only teach for thirty minutes and then they have to run to another class. They don't even stay to say hi or goodbye to students. That is worse than someone who is not a native speaker.”

That is not to say that local teachers can reasonably compete with foreign native English-speaking migrants.

Van Van Hoang, a professor at the University of Languages and International Studies at Vietnam National University, Hanoi, in a paper published back in 2017, seriously questioned the ability of local teachers to meet learners’ requirements.

“English language teaching in Vietnam, due to its low quality, has not met the demand for competent English-speaking people,” he said.

He went on to say this is because many teachers are unqualified, many have never had the chance to study in an English-speaking country, and many do not normally communicate in English.

This is also partially due to a demand and supply imbalance that existed well before COVID-19.

“The demand for English language teaching far outstrips the supply of native speaker and competent non-native speaker teachers,” Hoang said back in 2017.

How that has been affected by the COVID-19 school closures and travel restrictions remains unclear.

That said, the advantages of being able to speak English proficiently do not appear to have been impacted.

As schools and English centers continue to forge ahead and reopen, there are grounds for major changes to how the market for English teachers functions.

Who this will advantage, if anyone, though opaque now, should become clearer in the not too distant future.