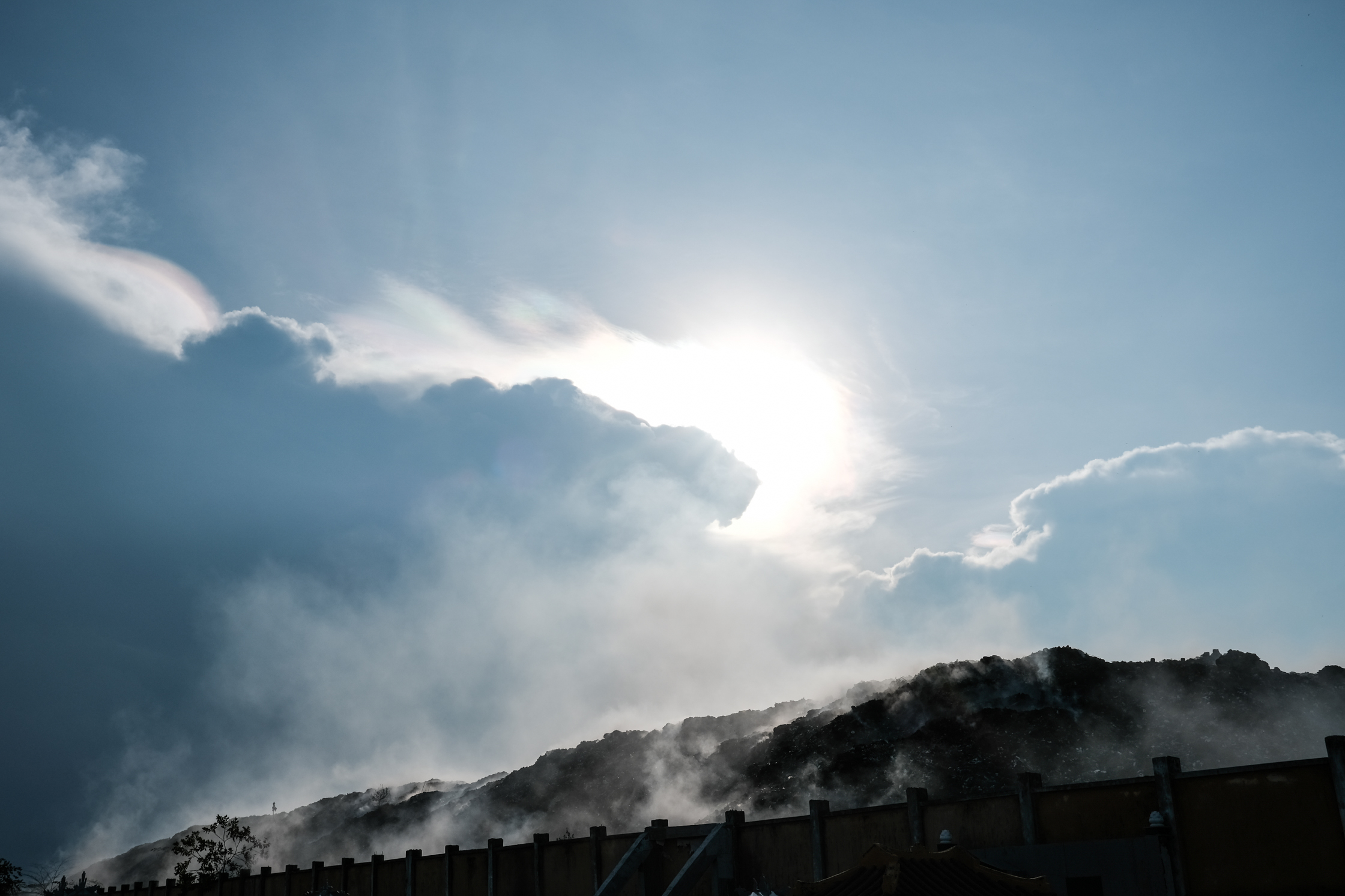 As if COVID-19 wasn’t enough, large areas of eastern Hoi An City in the central province of Quang Nam are suffering severe smoke pollution emanating from the Cam Ha landfill, about four kilometers northward of the city.

The smoldering fumes from the landfill have now been waffling over homes and tourist areas and resorts near the ocean for at least a week.

Regardless of how the fire started, it continues to slowly consume plastic, household waste, and unprocessed organic materials into a toxic cloud sweeping over the surrounding neighborhoods.

The impact on Hoi An’s tourist beach area, An Bang Beach, and the surrounding homes is alarming locals and expats.

Winds carrying the fumes not only circle eastward but at times into the town itself and even westward to other wards.

Many residents have complained about the smell and potential hazards being carried by the winds blowing mostly toward the eastern seaboard.

Parents have to take their children out and away from the stench during the daytime and close doors and windows despite the heatwave Hoi An is currently enduring.

It’s time for Hoi An authorities to order the removal of all burnable waste, extinguish the fires deep within the waste, and permanently close the landfill.

Hazards from unsorted materials in landfills can be quite dangerous, particularly for residents with asthma, allergies, and other medical conditions. The threat to children is even more worrying.

This is dangerously true of burning any form of plastic, even household containers.

Plastic when burned (not melted) gives off volatile organic compounds as small molecules that immediately create severe irritation of the eyes, nose, and lungs.

Any amount of continuous or prolonged exposure to these kinds of fumes can lead to cancer, birth defects, and serious illness.

Adding to the problem, water used at the landfill has also contaminated local groundwater, creating problems for households and local farmers.

The issue is the lack of ‘waste sorting at the source,’ when the garbage is first collected into safely burnable and non-burnable materials before recycling, incineration, and dumping.

The Cam Ha landfill has over the years become a deadly jumble. The danger buried in the mountains of waste also includes organic gases that produce fuel for a ‘slow burn’ effect deep under the surface trash.

This problem is not new or unknown. In October 2019, Tuoi Tre News reported on the growing mountains of trash piling up at Cam Ha as residents near the Tam Xuan 2 landfill, 70 kilometers southward, blockaded and refused to accept any more garbage.

Cam Ha’s incinerator was supposed to be able to handle about 50 metric tons of trash at a time but has not been operational since last year and in the meantime, Hoi An’s trash has grown to a staggering 100 metric tons a day.

City inhabitants are wondering why they pay for waste collection yet there is no major processing of the waste going into landfills.

This is not just a Hoi An problem, it’s nationwide. At least Da Nang has committed itself to transforming its Khanh Son landfill into a major recycling and processing plant by 2025.

While Hoi An’s government has promised since last year (as in the Tuoi Tre News article mentioned earlier) to find solutions to the problem, it’s apparent that the message isn’t getting out to everyone about waste management.

The city has encouraged people to sort materials rather than just rely on the local women who collect waste for cash.

However, there appears to be only one major project dealing with waste reduction.

In recent times, the recycling plant located about a kilometer from the landfill, which sorted recyclables and the rest of the materials, has been moved to the landfill.

From there, ‘pickers’ — people who search the dump — remove more useable material as the trash is turned over again and again for more sorting and then shipped south to the landfill near Tam Ky, Quang Nam’s capital.

The Hoi An Women’s Union, in conjunction with the local government and an NGO — Global Environment Facility, has been running a waste recycling and management project in Cam Thanh in Hoi An, near the city’s river.

They have significantly reduced the amount of reusable solid waste going to the landfill.

Either way, I understood that Cam Ha was closed and all trash was being shipped south. However, it’s obvious the landfill is still being used and mostly unmanaged.

Time will tell how many locals, tourists, and expats will end up with health problems from this continuing burn-off.

Everyone knows the current waste management is unsustainable, impractical, and more expensive in the long run than simple ‘waste sorting at the source’ systems such as color sorted waste bins and long-term persistent waste education for the population.

This problem can’t wait forever for a solution. Although it’s obvious that COVID-19 and other local development issues are weighing heavily on the authorities' minds, smoke and toxic fumes from the landfill will increase health issues.

Unlike COVID-19, this is an issue that can be addressed.

Keeping your belongings safe when travelling in Vietnam (Part 1)

2016 was already impressive because arrivals hit 10 million for the first time ever, registering a 25 percent increase in arrivals over 2015