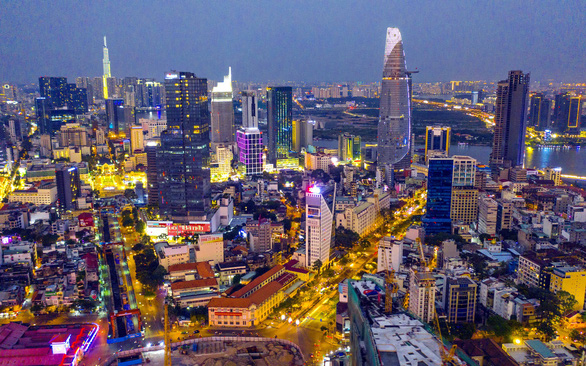 The red flags will be out in force for the long weekend coming at the end of April. It’s going to be busy with people on the move to hometowns to celebrate two holidays this weekend.

April 30 marks the end of the American war in Vietnam, as Westerners sometimes call it.

The date is known among Vietnamese as Reunification Day – one of the final moments in the process of north and south becoming reunified.

Foreigners sometimes confuse the occasion with ‘National Day’ or ‘Independence Day,’ which occurs on September 2 and celebrates Vietnamese independence declared by President Ho Chi Minh on September 2, 1945 following the end of the Japanese occupation of Vietnam.

It’s handy to remember if you’re trying to impress people in a pub with your knowledge of the local history!

The long holiday weekend basically runs from April 30 until May 3 and if you haven’t made any travel bookings yet then you’re stuck! Trains will be full, already the two major airports in Ho Chi Minh City and Hanoi are experiencing major crowding problems and buses will be full, too.

But probably the best way as usual with Vietnamese events is to stay close to home and just enjoy life where you are with family and friends. There’s no better demonstration of peace than that, hey?

Unlike Independence Day, which very official and serious, Reunification Day is a more celebratory occasion with the parades, festivals, and public festivities we’re familiar with prior to COVID-19. You could see the military parades but there’s also a very strong visual emphasis on Vietnam’s long history, its variety of ethnic groups, and the traditional songs and costumes of the nation.

Looking around a bit at the posters strung across the top of the roads will give you a good clue to local events associated with Liberation Day.

With both Reunification Day and May 1, or International Workers’ Day, coming back to back, this creates quite a long weekend for the population with many heading to the beaches, taking rural holidays or just sleeping over it! I like the upbeat mood at this time and for sure, anyone who has the opportunity and money will do their best to enjoy it after so much stress during our ongoing COVID-19 situation in Vietnam. It’s the perfect time to travel anyway before the sweltering heat of high summer hits. I do feel, having lived here for fourteen years, that it’s just getting hotter every year so it’s best to get your suntan early.

For Hoi An and Da Nang, it should be a very revitalizing time for the tourism industry with lots of bookings from the local area as well as Hanoi and Ho Chi Minh city. While wearing masks and social distancing are still recommended, I doubt it will feel over-bearing for most visitors.

I guess you could also celebrate Vietnam’s continuing success at keeping the coronavirus at bay and managing to still grow the economy in the middle of so much financial pressure on both the general public and the nation’s purse strings. I’ll ‘mot, hai, ba, yo!’ (one, two, three, drink!) to that!

Last year, I wrote about this day, commenting at the time on Vietnamese resilience during times of crisis and the ability of this country to work together on common goals without people going off in multiple directions on how to handle the resolutions of social problems. That this still holds true is unsurprising given what I have experienced of Vietnamese toughness, often with far less grumbling and complaining than in the Western world. Solidarity, albeit a dirty word in Western culture, is sorely needed worldwide and at least Vietnam is showing a good example of that.

Vietnam’s future, in spite of the health crisis escalating around the world, looks pretty rosy at the moment to my eye. We all know that millions have lost jobs and businesses and it will be some time before life gets back to anything near normal. However, it’s growing economically faster than most of the developed world. Industry is picking up customers again and it’s rapidly attracting foreign investment and manufacturing to shift here as world supply chains reposition themselves against the economic fallout from the virus.

I think Liberation Day will feel much more special this year since the nation celebrates this achievement after such a rough time last year. So there’s a lot to be thankful for if you’re Vietnamese. And if you’re not Vietnamese? You’re still lucky to be living here than anywhere else!

They’re aware that the incident happened everywhere, not only in Vietnam and strict punishment can be one of the solutions