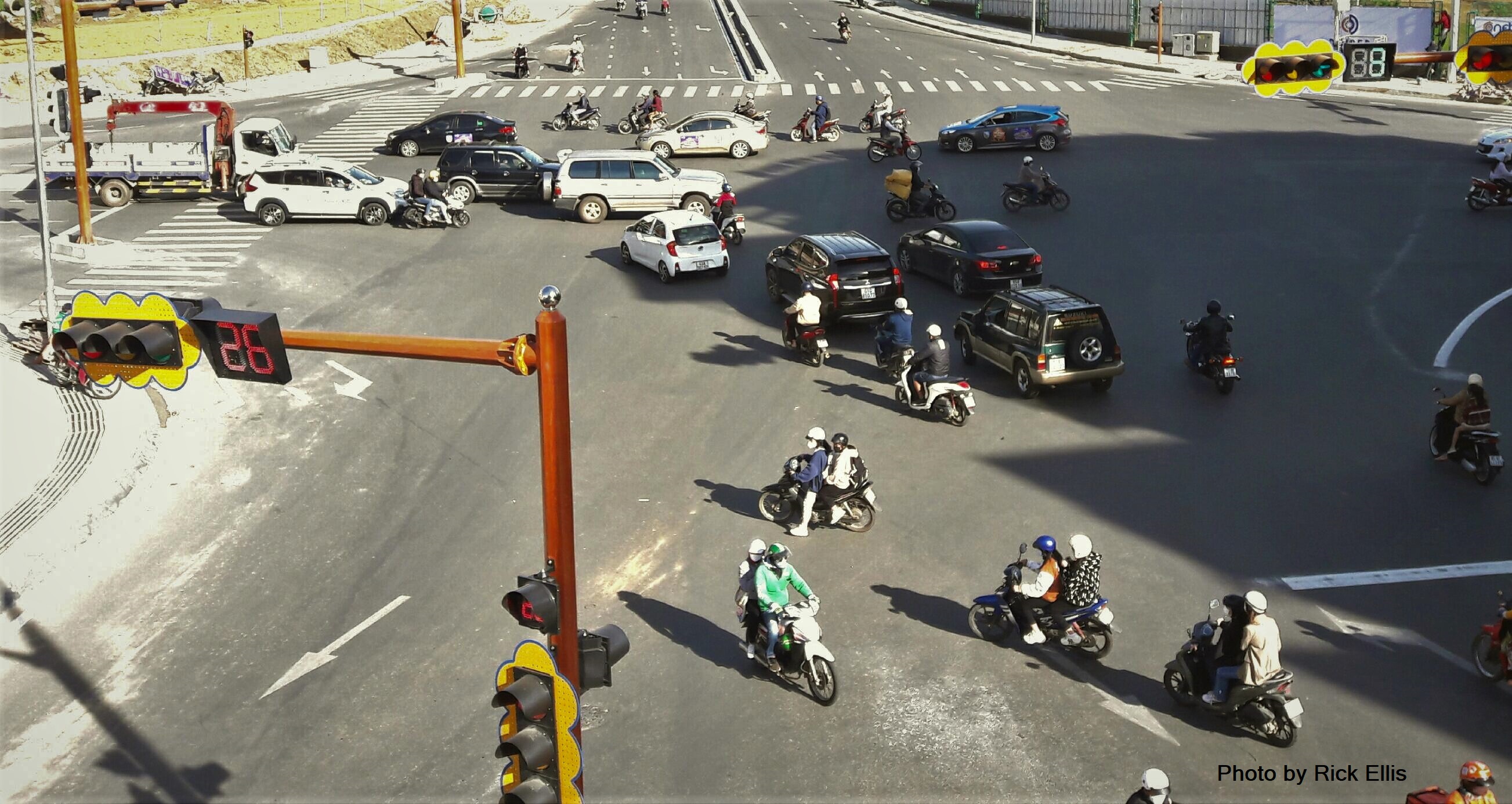 The latest upgrade in this neck of the woods was the installation of several traffic lights around Da Lat City, Lam Dong Province in an effort to harness the ballooning volume of vehicles zipping around.

It’s a great idea, given Vietnam is growing like a weed, babies are popping out like there’s no tomorrow, and there are an increasing number of vehicles vying for limited space.

I am blessed to live right beside one of the new configurations, thus ideally placed to study traffic flow and driver behavior, enabling a firm grip on who’s being naughty and who’s being nice.

Upon installation, the new system was fired up in ‘standby’ mode, meaning all the lights were continuously blinking red, thus helping drivers get acclimatized to the new setup.

The road to hell is paved with good intentions, and indeed the ‘standby’ business just added to the confusion. On top of that, the island in the center of the old roundabout had been replaced by a makeshift circle of barrels wrapped in red and white caution tape.

Most drivers cast a cursory glance at the flashing red lights, then blasted through the intersection and around the barrels per usual procedure.

That prompts the question: What actually was wrong with the old roundabout setup? Apparently, the traffic jams were too much to handle at peak hours and holidays, so it was high time for modernization.

For a bit of perspective, let’s take the fabled Arc de Triomphe roundabout in Paris, into which no less than 12 streets are funneled. That traffic circle is one holy mess, just as big a tourist attraction as the Arc itself.

There is even an instructional video on the Internet focused on navigating the entire monstrosity entitled – and I’m not kidding – ‘How to navigate the roundabout at the Arc de Triomphe without dying.’

Bear in mind that Parisians are among the most inept drivers on earth, parking their cars by driving straight into the desired space, then bashing the living crap out of the vehicles in front and behind until they abandon the effort and go for a glass of wine.

If Parisians can manage a 12-point roundabout without stoplights with their pathetic driving skills, then surely nimble Vietnamese drivers can manage a five-point version.

So then, why put in the lights if we’re just going to keep doing what we’ve always done?

It’s a valid question, but we’ll never know why, because one day the neighborhood awoke to find the lights fully functional, including world-class numerical countdown thingies blinking and flashing like pinball machines, indicating the number of seconds until a light would next turn green.

Those numerical indicators are construed as an invitation to take off like a bat out of hell as the count winds down near zero, sort of like an auto race, which I suppose it is.

The issue with that approach is drivers coming from other directions who reach the intersection just as their signal is turning red also put the pedal to the metal, confident they’ll reach the targeted artery by the time the other light turns green, and we all know how that charade can end.

Most drivers have taken it all in stride – obeying signals to some degree – delicately crossing the intersection, and even extending gestures of deference, patience, and respect to their fellow drivers.

That’s not to imply some dicey situations haven’t arisen over the new lights, including smatterings of colorful language at times:

Driver A: “Get that piece of crap out of the middle of the road!”

Some conform out of fear, thinking the local constabulary is lurking behind trees to spot and fine offenders (I checked, they are not; or if they are, they are cleverly camouflaged).

Obviously, correct procedure is nebulous because the city proper has never had a functioning stoplight until now, so, understandably, drivers were bewildered when five of them appeared in a short time at various key choke points.

Many had never faced the dreaded left-turn signals included in the configuration. Fear not, Vietnam, you are not alone when it comes to left-turn signal insecurity, it can be found the world over!

Depending on country and region, some of those left-turn signals flash and blink, others display solid colors, and some varieties feature illuminated arrows, leaving drivers exposed to oncoming traffic while they advance.

The local civic engineering team went with the illuminated arrow version, which looks very advanced, but in reality is a pain in the neck because those arrows could mean several things, so nobody knows who has right of way. What do they want drivers to do?

A: Lower head and let fly, or

B: Proceed with caution, or

As the dust settled after the first couple of weeks of live operation, a trend emerged that piqued my curiosity, and it wasn’t just the left turns:

Why were drivers still confused by the new stoplights?

To get to the bottom of this mystery, I headed for the upper floor of a café situated dead center in the action, looking for targets like a sniper in an espionage flick.

All those gadgets gave me a degree of confidence until I spotted drivers awaiting the green light leering at me out of the corner of their beady little eyes. I squeezed mine closed, then bolted, ignoring the timers and symbols, scrambling to safety just in time.

The upper floor of the café provided the solution to the entire jigsaw puzzle, offering a bird’s-eye view of the junction of the five streets and the logic and timing of the stoplights.

It was a piece of cake to spot the red collision points between drivers headed from top to bottom and those flowing from both left and right from my vantage point above the intersection.

This other scenario is even more cluttered because the system manages more options, so it’s easy to see how the stoplights’ timing creates conflicting flows.

My Western know-it-all attitude instinctively kicked in, immediately concluding there was an error in design. I have every confidence in Vietnam’s ability to overcome any hurdles in the race for development, but this one time I thought the design team blew it big time.

I kept studying the flow until it hit me like a bolt of lightning:

The design of this intersection is precisely what the engineers wanted!

I made a boatload of meticulous calculations, deducing that having one fewer stoplight phase would shave one minute off maximum wait time.

That doesn’t sound like much, but in a country like Vietnam where customers are so rushed that they often holler out their drink order as they enter a café, time is at a premium.

The debate over whether to squander up to 2.5 minutes sitting idle at a stoplight probably didn’t even last as long as one cycle of the stoplights:

2nd engineer: “No way on earth people are going to wait 2.5 minutes.”

1st engineer: “The hell with that! We’ll keep our drivers on their toes.”

2nd engineer: “Yep, it’s still a vast improvement on the mess we had before.”

And that, I reckon, is how the dilemma was resolved.

If engineers in a highly developed country were confronted with this junction of five streets, there would be one phase (the term used to describe a single sequence of green to amber to red for one stoplight) for every possible route through that intersection, leaving nothing to fate.

It’s the safe bet, but by the time all those lights completed their respective phases, nobody would remember why the hell they left home in the first place, never mind how to navigate the intersection.

One could argue that this design defeats the purpose of the stoplights, but to me it’s an absolute work of art, offering the best of both worlds by ensuring some degree of order sprinkled with a dash of anarchy, just the way it works best for Vietnam.

We’re left with a cross-cultural symbol, morphed like a baguette into banh mi or French beef stew into ‘bo kho.’

Next time you head through such an intersection, honk if you agree!!