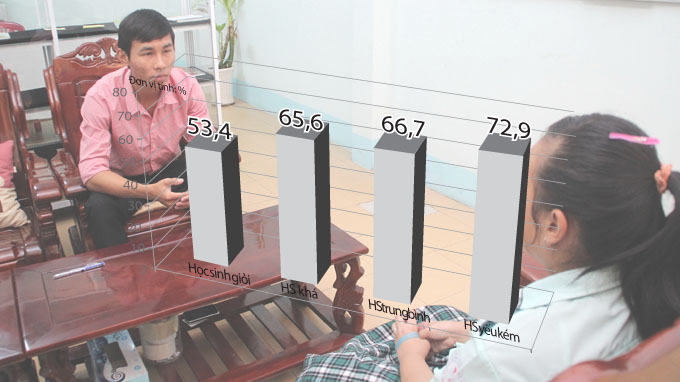 Sixty-five among every 100 high school students in Ho Chi Minh City suffer from a mental disorder when preparing for exams, recent research showed.

The study which was carried on 500 students in the 10th, 11th and 12th grades in the city was released last July and presented at the conference of young scientists of the university early this year.

According to the research, there is a strict relation between a student’s mental disorder and their studying.

Specifically, the pressure from the school curricula, exams and the relation with teachers are the main causes of the illness.

Over 73 percent of surveyed students suffer a mental disorder because of their curricula and 69.2 percent of them have the illness due to the pressure from exams, while 71.3 percent are mentally disordered due to pressure from teachers.

Students under pressure from school curricula and teachers have 1.12 times higher mental disorder than students without the pressure.

“This is a high rate. It is maybe because students today don’t have much time to entertain themselves due to the tense schedule of studying and the large amount of homework,” Nguyen Thi My Chi said. “This is a common situation in modern society. Vietnamese people always think that studying is a way to get out of poverty so family and school usually put a lot of pressure on students.”

Hard to be diagnosed

According to Huynh Ho Ngoc Quynh, an instructor from the HCMC Medicine and Pharmacy University’s Public Health Department, mental disorder is the situation in which mental heath deviates beyond one’s limit to self-control.

The patient’s ability to recover is very high if the illness is diagnosed soon. However, mental disorders are hard to diagnose and the situation will turn into depression or schizophrenia if the ailment is not found out soon.

A student with mental disorder in the first phase will not have clear expressions of the illness and can study and work like a normal person.

To identify who is at risk needs specialized measurements. Asian, especially Vietnamese people, have still had a taboo on the phrase “mental illness” so it is not easy to identify the risk of mental disorder in the community.

The World Health Organization statistics show that mental disorder ranks 5th on the list of ten causes for human illness.

The organization has also recently identified that mental illness will become common in the future, ranking first in human illness lists, beating over HIV/AIDS, cardiovascular and infectious diseases.

Instructor Quynh also said that solutions for the situation, like reducing the class time or reforming school curriculum, have been carried out loosely and the current education system still has not had very efficient reformation.

The research’s author My Chi suggests that schools create channels for students to speak their thoughts through mailboxes, Facebook pages or forums because most students do not have a place to ease their stress.

Mental health care also needs to be brought to school in order to discover students with mental disorder before it becomes serious.

Family is also an important factor to help students overcome the illness by understanding, respecting and saving time for them.

Students themselves should join outdoor clubs, balance their school schedule and entertaining activities and not to use stimulants and violence to ease stress.