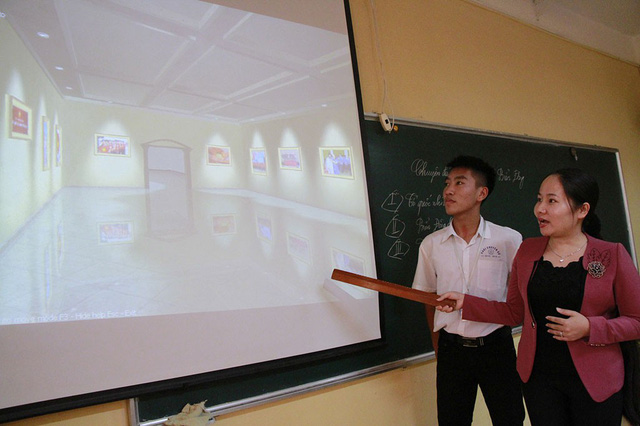 A high school teacher in northern Vietnam has employed advanced 3D technology to encourage her students to learn history.

Nguyen Thu Quyen, a history teacher at Nguyen Trai High School for the Gifted in the northern province of Hai Duong, has created 3D models of museums to inspire her students.

With only a few clicks, Quyen reveals to students vivid, virtual museums where they can not only experience 3D rooms full of historical images but they can also get access to information on difference historical periods.

Students are invited to express their opinion and share their knowledge of historical events.

“We have been using virtual museums since 2015,” 12th grader Duong Trung Hai said. “It has helped us develop a logical way of thinking about history.”

“The 3D history museums have also increased our creativity, given us a deeper knowledge and encouraged our passion for the subject,” he added.

Hai and his friends can even 'build' their own 3D history museums under the instruction of Quyen.

Recalling how she came up with the concept of creating a 3D museum, Quyen said she had been nurturing the idea since 2011.

“Things started after I saw a piece of English teaching software called Amazing Wiz English that included a virtual character instructing lessons,” she said. “I was into it and wanted to create a similar piece of software for my subject, with the narrator to be the mythical folk hero of Vietnam, Thánh Gióng.”

Quyen worked with a friend at the University of Industrial Fine Arts in Hanoi to carry out her plan, and although they failed at the time due to the large amount of money and time required, Quyen did not give up.

With an enthusiasm for technology, she began to work with projectors, laptops, and movie editing software to create videos based on available historical documentaries for her lessons.

A turning point came in 2015 when she was introduced to a program featuring a 3D museum of ancient Vietnamese lanterns and Buddhist culture.

That was when she googled how to make her own.

“Finally, I found some free software which allowed teachers to create photo albums in the form of 3D galleries using a variety of designs,” she recalled. “My first ‘product’ was created after three hours of working under the instruction of a friend.”

“The most important part was finding the appropriate materials online. Currently it takes me around 15 minutes to ‘build’ a museum.”

So far, Quyen has created museums about countries in Asia, Africa and Latin America.

“I don’t favor any specific teaching method, because each method has its own strengths. Most important is the initiative and knowledge of the teacher, and how she or he adjusts their methods to increase students’ interest in studying,” she said.

According to the school’s principal, Trinh Ngoc Tung, Quyen has been a pioneer in applying information technology in teaching and learning at school.