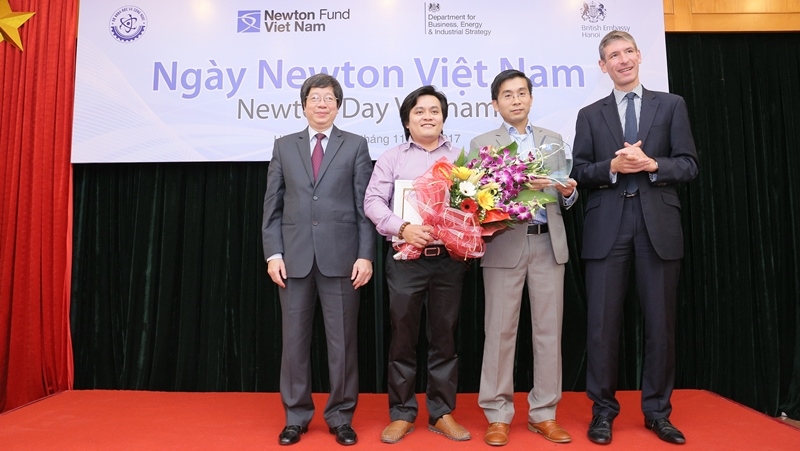 Two researchers from Vietnam and the UK have been awarded the prestigious Newton Prize for a project that facilitates communicating in the event of disasters.

Lead researchers Dr. Vo Nguyen Son from Vietnam’s Duy Tan University and his UK-based counterpart Dr. Trung Duong from Queen’s University Belfast won the £200,000 (US$265,000) prize for their jointly designed communications system that can work even when extreme weather and natural disasters strike.

The award was presented to the researchers by British Ambassador to Vietnam Giles Lever and Vietnam’s deputy minister for science and technology Tran Quoc Khanh in Hanoi on November 16, the British Embassy Hanoi announced on Wednesday.

Their Newton Fund project, “Building a foundation for sustainable development networked societies for the cities of tomorrow,” designed an integrated heterogeneous wireless system (IHWS), which is robust in maintaining communications during disasters such as floods, landslides and droughts, according to the embassy.

The system copes with issues such as physical destruction of telecommunication networks, lack of power supply and network congestion, and also provides early warning of natural disasters by detecting water level, vibration and wind.

In cities, the IWHS can detect increases in dust, temperature, noise and carbon dioxide levels.

Academic staff and students from 20 universities throughout Vietnam have been trained in the system and several leading telecommunication companies are interested in bringing it into production.

“Natural disasters are a big problem not just in Vietnam but throughout the whole world and the impact is worse for those in remote and isolated areas with no access to the ICT facilities that are essential to providing vital warning information and aiding in rescue missions,” Dr. Duong said.

“This prize money will allow myself and my team to develop the system further and to work with the key telecommunications companies in Vietnam.

“By doing so we can provide citizens with better warning, measurement tools and education initiatives.”

The Newton Prize is an annual £1 million fund awarded for the best research or innovation that promotes the economic development and social welfare of developing countries.

More than 150 Newton funded projects, fellowships or other awards applied for the Newton Prize from the eligible countries for this year – India, Malaysia, Thailand and Vietnam.

There are 25 shortlisted applications in total and five Prizes of up to £200,000 will be awarded to each winner to be used to advance or develop existing Newton funded work.

The November 16 event in Hanoi was attended by more than 100 people, including researchers, representatives of the Vietnamese government and Vietnamese delivery partners, to celebrate three years of the Newton Fund Programme Vietnam and its growing success in research and innovation collaboration between the UK and Vietnam.

“As a dynamic emerging economy with a strong vision of the importance of science and innovation in human development, Vietnam is a natural partner for the global Newton Fund,” ambassador Lever remarked at the event.

“I am excited to think about the future possibilities, and look forward to a bright future for the Newton Fund Programme Vietnam.”

The Newton Fund Programme Vietnam is the first formal research and innovation partnership program between the UK and Vietnamese governments.

Over the last three and a half years, the fund has disbursed nearly £5 million and rolled out 35 calls over 15 schemes.

This has resulted in 162 grants that benefit nearly 400 individuals, mostly researchers from 60 Vietnamese and 43 UK research organizations.