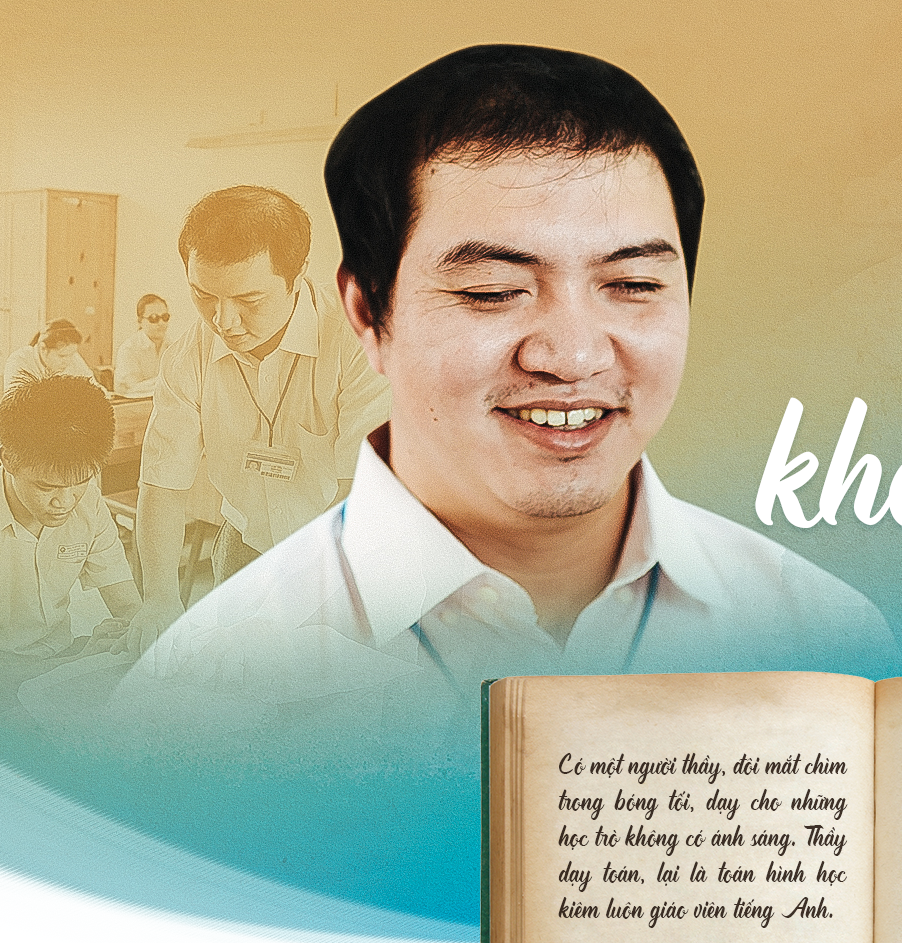 Nguyet Quyet Thang, a math and English teacher in Ho Chi Minh City, overcomes his visual impairment to pursue his passion for the teaching profession.

He was initially believed to suffer from short-sightedness, but despite wearing medical eye glasses he still could not see the board clearly.

After the family took him to an ophthalmologist in Hanoi, he was diagnosed with retinal degeneration, a medical condition which can damage eyesight to the point of total blindness.

“His eyesight will worsen until he can no longer see anything. Try to learn as much as possible now,” said the eye specialist.

In 1998, Thang had to stop schooling at age 13, and has had to live in total darkness ever since.

“Those were the most terrible days of my life,” Thang said.

While Thang was buried in disappointment due to the “life imprisonment” to a most unwanted physical condition, he learnt of a high school in Ho Chi Minh City for the visually impaired.

He mixed in well with his new peers and somehow managed to maintain excellent performance.

The blind boy was deeply drawn to mathematics, especially geometry, though he could only use imagination to visualize shapes and sizes.

Determined to become a math teacher, Thang applied to the Ho Chi Minh City University of Education, which is a leading teacher-training college situated in District 5 of the southern metropolis.

He met with opposition from almost everybody, mostly the officer in charge of student admissions therein.

“No blind student has been able to learn math before,” he said.

Thang was relentless in his intention, though. He managed to secure a personal meeting with the dean of the math department.

“I’ve never seen a blind student pursuing math in Vietnam, but there’s a famous blind math professor in Russia. I believe in you,” said the department head.

The strong-willed student made it to college. Here, however, hurdles were taller than ever.

One thing to note, though, is that textbooks for the visually impaired were something of a luxury during this time.

Thang was deeply distressed since he could not get hold of tailored materials or recorded lessons.

It was painstaking trying to keep up, but Thang successfully went through the four years at the university thanks to his classmates’ encouragement and after-class group work hours.

After graduation, the daredevil was instated as a teacher in Nguyen Dinh Chieu School for the Visually Impaired, located on Nguyen Chi Thanh Street, District 10, Ho Chi Minh City.

He gave algebra lessons not using a blackboard, but a Braille textbook designed specifically for his blind students.

For geometry, they relied on metal models of different shapes like triangles, hexagon, trapezoid, and others, using their sense of touch for visualization.

Thang had another problem, however.

His math competence was sufficient for the transfer of knowledge, yet the pedagogical skills in dealing with visually impaired students were a different ball game.

Since references on such methodology were not readily written in Vietnamese, but in English mostly, the math teacher had to take up English lessons.

In fact he earned a second college degree in English language teaching and was assigned English classes alongside his math sessions.

So far, Thang has been teaching for eight years.

In front of a successful man stands a loving woman

Back home, the blind man is not alone. He is tenderly supported by his wife, Xuan.

Unlike most couples in Vietnam where the male would drive the female around town for late-afternoon sightseeing, in their case Xuan would be her husband’s personal chauffeur and guide.

While driving him around, she would patiently describe to him what there is along the way: how this building on the right looks, or how the street art is displayed.

Xuan is as strong-willed as her husband, for she too had to defy intense familial opposition in her pursuit of happiness.

By nature, her parents would not risk their daughter’s future considering the burdens that should be laid upon her shoulders once she is tied to this blind man.

“I love him so much. I won’t give him up,” Xuan said firmly.

Together the couple proved to her parents that Thang was not a wreck, but a man with stable work and the ability to fend for himself.

The two met during their college years, went down the aisle in 2014 and currently have one son.

He named his child Nguyen Thai Son, after the name of the very teacher who gave him the opportunity to pursue the teaching career.

According to Thang, life is not a bed of roses.