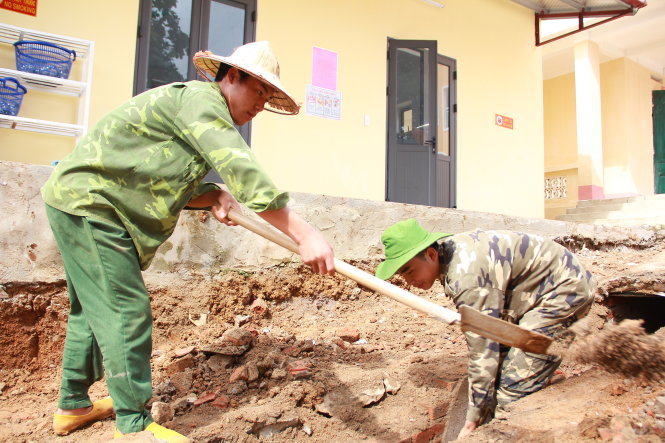 A poor student in northern Vietnam has strived to achieve a praiseworthy academic and exam performance in his high school time and is now working to earn money to pay tuition for his chosen law college.

Lo Van Manh comes from a disadvantaged family background where his parents slave away all year round but fail to make enough money for the household.

The ethnic-minority 18-year-old’s father can only work a dozen days monthly due to sciatica.

As a student, Manh used to spend the morning studying in high school and the afternoon helping his mother feed animals and do the farming, and only sat at his learning table at night in his low-roofed small house at the foot of a mountain in Son La Province.

Manh enjoyed an improvement in his education, becoming a student with a good overall result in grade 12 and won a consolation award in a difficult provincial competition on history.

“He’s a student of great effort,” Vu Thi Thanh Tuyen, one of his teachers, said.

Manh’s result was around five short of the maximum score in the latest national high school examination, a test crucial to students’ chance of being admitted to college.

He applied to Hanoi Law University in the strong belief that he can attend one of Vietnam’s most prestigious higher education institutions.

The decision was reached with hesitation, since Manh thought that his family is too poor to cover the tuition fees and he may waste their money if he is unable to find proper employment upon graduation.

But his father encouraged him to be determined, saying the family would do more gardening and raise poultry to support him.

Now while awaiting the admission result, Manh has been doing various manual jobs like making concrete, digging soil and installing water pipes, at a construction site around 30 kilometers from his home.

He hopes the money gained from the effort during the remaining days can ease the burden his parents will shoulder in paying his school fees.

If admitted to the university, he intends to seek a job as soon as he arrives in Hanoi, in order to make his way through college and become a competent lawyer.