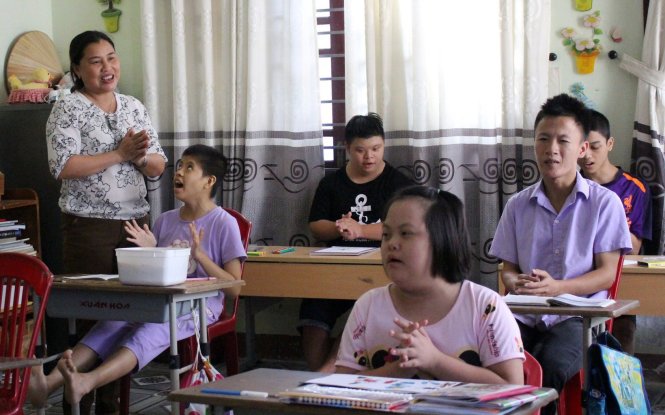 A Vietnamese teacher has run classes for children with disabilities and various disorders for over a decade in the hope of helping them realize their dreams, but the difficulty job has never discouraged the woman with a heart of gold.

More than 25 years has passed since 49-year-old Luong Thi Kim Loan first worked at the Social Support Center, a place for tending young people in dire need of the community’s assistance in Quang Nam Province.

When she came, children with serious disabilities and disorders here were only expected to eat, sleep and have fun, and received care until they reached 18, when they would be transferred to another facility of a similar nature for adults.

But 13 years ago, Loan began opening literacy classes for them with approval from the center’s managers after realizing that many kids with severe physical or mental problems could actually learn.

Nearly 40 children are now able to read and write.

Loan’s routine involves waking up her 12 students, but this proves not easy as one of them lies back as soon as she helps another sit up.

Some make noise in bed, asking her to put them in wheelchairs.

But sweat goes with her throughout the day.

Each of the students may have autism, polio, visual or hearing impairment, Down syndrome, cerebral palsy and hyperactivity disorder.

Her teaching session starts with an engaging activity like choral singing and a quiz.

She said it is hard to come up with a game that can run through all differences in physical and mental abilities of the class.

Loan has to tailor her teaching methods to the individuals based on their age and capability.

The woman has devoted herself to them as a teacher and possibly a mother despite the modest salary.

“The first time I saw them, I started to love them very, very much. And I hope I can do something for them,” Loan said.

But ‘teacher’ may not be a fitting word for her role as she also provides the children with educational and physical therapy.

An example of success for her efforts is a student with cerebral palsy known as Vu, who was saved from a great flood 20 years ago and later brought to the center.

Vu can now learn well in grade six, speak English with unclear pronunciation due to the disorder, and walk with steadier steps – an admirable improvement coming from him and Loan’s care.

Loan has developed an empathy rather than sympathy for her dear special students.

“Disabled children are like any normal children in that they have dreams to fulfill, efforts to make, but they are put at a disadvantage by bodily imperfections,” she said.

“I only play the role of a person who enables them to live out their dreams.”