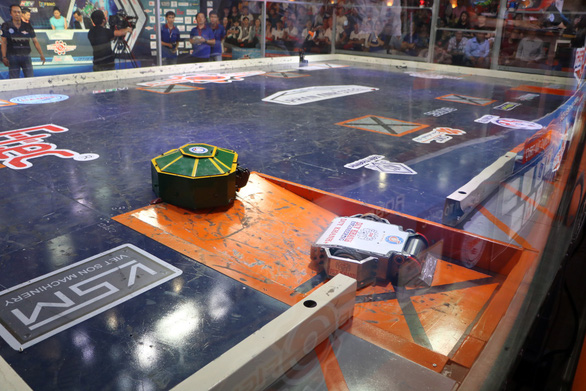 Twenty teams from eight colleges, universities, and tech companies in the city participated in the contest’s first edition, hosted by the University of Technology and Education.

RoboFight competitors designed and operated remote-controlled machines armed and ready to battle against opponents in a sealed arena.

Each pair of robots fought two three-minute matches to determine the victor. Pairs who split their victories in the two preliminary matches faced off in a tiebreaker round.

During each match, the robots did their best to neutralize their opponents by flipping the opposing bots upside down, causing substantial damage, or forcing them into the ‘hazard’ area of the arena.

Bots fight in the quarterfinals of the 2018 RoboFight in Ho Chi Minh City on December 5, 2018. Photo: Tuoi Tre

The square arena features high polycarbonate walls with steel frames to protect the drivers, officials, and audience from flying shrapnel and charging bots.

Six teams from Ho Chi Minh City’s top technology universities made it into the competition’s quarterfinals on Wednesday, where they faced off against two teams from companies based in the southern metropolis.

The semifinals will be broadcast live at 7:00 pm on Saturday on HTV7 television channel.

With little concern about the ability to use English in daily life, many students in Vietnam are running up blind alleys by rushing to learn IELTS