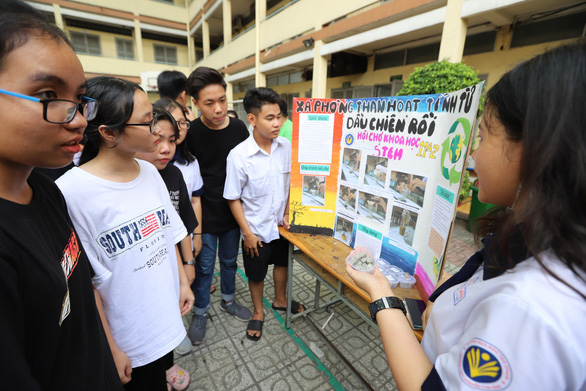 Eleventh graders at Nguyen Thai Binh High School in Tan Binh District presented their newest research on soap bars after noticing that the oil is usually thrown into drains, contributing to environmental pollution, as well as the amount of waste disposed of by each household.

“Since cooking oil contains a lot of impurities after being used, it is impossible to be re-used as skincare products or lip moisturizers, but it can still be recycled into soap,” Lam Dao Chuong, a member of the research group, said while speaking before an audience at the fair on Saturday, explaining why the group chose this specific product.

Students and teachers were excited to try out the newly-introduced product, while also attentively listening to the members of the research group describing the process of turning used cooking oil into activated charcoal soap.

“It took us almost a month to make an actual product from an initial idea,” a class 11A2 member said.

“We have already tried using it in our families and found it quite effective,” he added, encouraging others to do the same to protect the environment.

Vietnamese have been increasingly concerned about the environment with the spread of environment-friendly drinking straws, limited usage of plastic bags, and schools encouraging such activities.

The concern and interest could be felt among students at the science fair as soap bars made from recycled oil were not the only environment-friendly products presented.

Other researches also attracted teachers and students’ attention such as growing plants in styrofoam cooling boxes, turning used water bottles into water-purifying tools, egg hatching devices made from waste, and fashion items made of domestic waste, among others.

Environment-friendly products were not the only impressive presentations at the fair as many others were also highly praised for their varied experiments.

As the students were able to present many impressive researches, Huynh Khuong Anh Dung, the headmaster of the school, did not hide his pride, acknowledging that the science fair was aimed at encouraging students’ creativity and passion, enabling them to turn theory into practice, and raising awareness of environmental issues.

Some netizens have ironically suggested changing “Road to Mt. Olympia’s Peak," the name of one of Vietnam’s biggest quiz contests, to “Road to Australia” after nearly all of the winners have stayed in the south-west Pacific Ocean country since finishing their studies with a US$35,000 scholarship