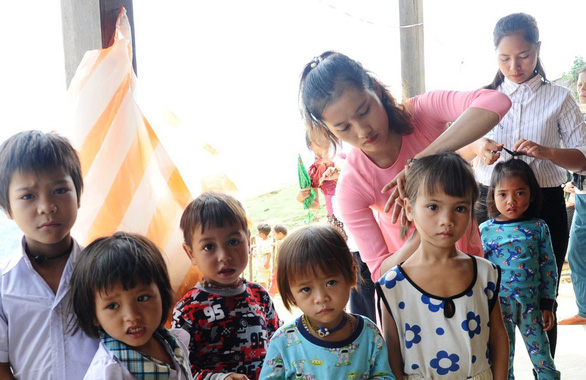 Beginning a new career is never easy, but starting that career in a far-flung mountain village with no running water and limited access to the outside world is nothing short of formidable.

Tra Thi Thu, a Vietnamese woman in her mid-20s, chose to take up such a challenge and highlight the importance of giving up material comfort in order to take up a teaching position where she’d be on the frontlines educating Vietnam’s underprivileged rural youth.

Thu, 25, was introduced to the public when photos she took of her school’s ceremony to ring in the 2019-20 academic year earlier this month went viral after being published by Tuoi Tre (Youth) newspaper.

The photos, featuring Thu and her students against stunning backdrops of central Vietnam’s mountainous region, offered insight to the difficult yet magnificent lives of the country’s rural citizens.

Most importantly, they gave the public a glimpse into the beautiful story of a young woman who rejected a conventional career path in order to bring education to children in need.

How it all started

Thu spoke with Tuoi Tre about the decision to take on a teaching position in such a remote village, explaining that her choice was driven by her passion for teaching.

After finishing high school, Thu enrolled at Quang Nam University where her love of children and dream of becoming a teacher drove her to earn a degree in pedagogy.

Her dreams, however, were put on hold after graduation in 2014 when she was unable to find a job in the education sector.

Putting her dream aside, Thu took up a job as a blue-collar factor worker in order to earn a living.

A few months later, her sister, a teacher working in Nam Tra My District, suggested Thu fill a vacant contract position to teach kindergarten in Tak Po, a remote village located 1,000 meters above sea level on Ngoc Linh Mountain in Quang Nam with little in the way of material comforts.

Thu gave her nod to the offer, almost immediately.

“I’ll go at any cost and won’t change my mind despite how difficult it is,” Thu recalled telling her sister.

Thu recounted that it took her a day and a half to travel from her home to the far-flung school.

The young teacher wasn’t shy in admitting her naivety about how tough conditions in Tak Po would be before she took the job, explaining that she had a dreamy, unrealistic image in her mind about life in the mountains.

“My imagination and reality were really as different as chalk and cheese,” Thu said.

“It was really cold and the school was only accessible by foot from the village’s center.”

Though she had promised her sister she’d stay strong, Thu broke down in tears.

“The school seemed primitive and it rained for days on end,” she said, explaining that grocery shopping could only be done once every few weeks, water had to be drawn from a nearby stream and firewood had to be collected from the surrounding forests.

Though the village did have solar power and access to a mobile network, the lack of paved streets made traveling during emergencies, such as natural disaster or sickness, extremely difficult.

“I really bawled,” she said.

Despite the challenges, Thu chose to stick it out in Tak Po.

“I know that it’s normal to face these difficulties and many of my colleagues also dealing with similar issues in even more rural areas,” Thu said.

“I just keep telling myself that I’m still young and tough experiences will make me more confident and courageous in my teaching career.”

Asked if she’s ever regretted her decision to go to Tak Po, Thu answered with a resounding “No”.

“I feel that I made the right choice and I’ve never regretted it,” she affirmed.

“I’m young and if I feel there’s a place that needs me and I have a desire to go there, I will."

Thu said even though the material conditions are insufficient, she believes nothing can be better than living with the local people and students in these mountains as  she has done the past few years.

"Wherever I wind up in the future, my days of living in Tak Po will always be the most beautiful time of my career,” she said.