U.S. Consul General in Ho Chi Minh City Marie Damour paid a three-day visit to the Mekong Delta province of An Giang this week, where she met with provincial leaders, attended the 20th anniversary of An Giang University, and opened an American Hangout at its campus.

In meetings with local leaders, Consul General Damour reaffirmed the U.S. commitment to a strong, prosperous, and independent Vietnam, and discussed ways to increase cooperation between Hanoi and Washington as the two countries prepare to celebrate the 25th anniversary of the normalization of their relations in 2020.

“The future of Vietnam and the U.S.-Vietnam relationship will be determined not only by Hanoi and Ho Chi Minh City but in all 63 provinces and cities of Vietnam," she was quoted as saying in a press release.

"Places like An Giang will have an important role to play in the next 25 years of our partnership.”

She also met with representatives from the An Giang Border Guard Command, Women’s Union, and Department of Labor, War Invalids, and Social Affairs to learn about their work to combat human trafficking along Vietnam’s border with Cambodia and to discuss ways the United States can work with Vietnam to help end such trafficking, the press release stated.

On the same day, Consul General Damour also opened a new American Hangout at the campus of An Giang University, the second in Vietnam after the first one was launched in neighboring Can Tho City last year.

Patrons will also be able to join special broadcasts of events at the American Center in Ho Chi Minh City, it added.

“The American Hangout is a testament of our shared vision and marks an important milestone in the already strong relationship between the U.S. Consulate and An Giang University, as well as between the American people and the people of the Mekong region,” Consul General Damour was quoted as stating at the opening ceremony on Monday.

The diplomat also participated in the university’s 20th-anniversary celebration in recognition of its long-standing partnership with the U.S. Consulate General in Ho Chi Minh City.

The consul general visited the Mubarak Mosque and met with Cham Muslim community leaders to learn about Vietnam’s rich cultural and religious diversity. 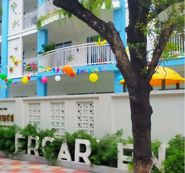