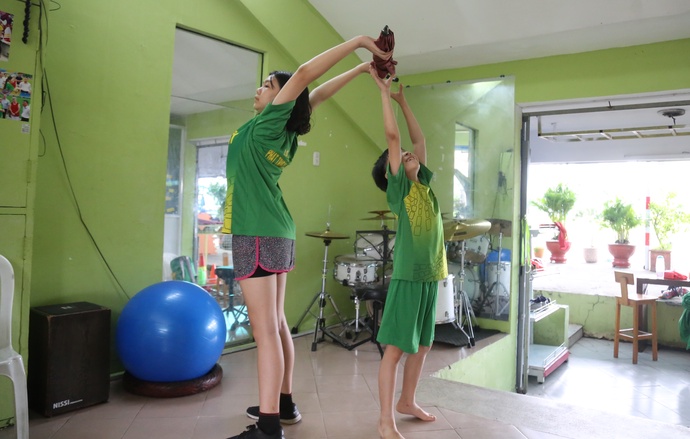 Since the beginning of coronavirus-induced online learning, Vietnamese schools have seen an overwhelming number of complaints about physical education (PE), which is arguably the worst subject to be taught online given its physical nature.

Yet, it does not have to be that way, according to some experts.

In most K-12 schools in Ho Chi Minh City, online PE lessons are currently 45 minutes long, similar to how they are done in person.

In reality, they are usually cut short to save time and help alleviate the stress of getting ready to study the next subject.

Khai Nhien, a high school student in District 5, said the PE class she is attending spends 20 minutes on the warm-up part alone.

Then, it is followed by a five-minute break and a 15-minute session with new exercises, which sometimes end up with the class letting out five minutes earlier.

Students do not need to uphold strict dress codes -- sometimes they do not even need to wear shoes -- as they used to in on-campus classes, Nhien added.

“I feel like teachers do not want to put more pressure on us, rather wanting us to have a break,” he said.

“However, I’m not so sure about the effectiveness of the exercise I was taught.”

Most online PE classes revolve around exercise routines, for most students are cooped up in small apartments and do not have access to large open spaces to do other forms of training.

Having to do the same exercises in enclosed spaces has quite a few students feeling fed up with online PE classes.

Q.T., a parent of a middle school from Tan Phu District, said her daughter cannot help yawning when it comes to the weekly PE classes at her school.

Her daughter used to go swimming and playing badminton every weekend, not to mention joining her on daily bicycle trips.

“In the past few months, she has relied on PE classes to get her fix of exercising,” she said about the online classes that have been running in Ho Chi Minh City since May, when local schools and training facilities closed down over fears of COVID-19.

“However, the routines are just too boring – just the same moves that I was taught 20 years ago.

“My daughters have already given up on them, and choose to stay active by jogging around with me instead.”

Huyen Vi, a mother in Ho Chi Minh City, also found her child having a hard time with online PE classes during the COVID-19 pandemic.

She recalled hearing weird noises at midnight, which she thought to be from a thief, only to find out that it was her son doing aerobic routines for his PE classes because it was too embarrassing for him to practice during the daytime.

“These routines were seen as awkward by his fellow classmates as well,” Vi said.

Most of these exercises focus on flexibility over strength, which Vi and her husband deemed unnecessary for her teenage boy.

“I’m thinking of reporting this issue to the school and asking them to change the exercises for online PE classes,” she stated.

To do or not to do

The teaching of theories has increased in PE classes of K-12 schools in Ho Chi Minh City once they went online during the pandemic, according to a survey by Tuoi Tre (Youth) newspaper.

In several cases, theoretical content for physical education is being taught over a few successive lessons and may be repeated during preparations for tests.

Seeing the pressures that online PE exacts on their students, a school in Binh Tan District has mulled over removing PE from its curriculum this year.

The plan was met with overwhelming support from parents, who feel that exercising in front of digital screens is ineffective and time-consuming.

However, the school’s management had to bring back the subject after a one-month pause, as they still have to complete an unchanged amount of PE coursework by the end of the school year.

“Students would be even more stressed if we cram the whole syllabus into the latter half of the school year, so we have to resume PE classes to keep up with the coursework,” a school official said.

PE classes are currently dull and uninspired, but they do not have to be that way, according to Hoang Tung, a lecturer at the Ho Chi Minh City University of Physical Education and Sports.

Instead of sticking to the curriculum, teachers can spice up the lessons with new game formats.

“PE students in elementary schools should act as game facilitators, doing 'Simon says' or similar games to pull the class together,” Tung said.

“They also have the freedom to create new routines and use the latest music tracks to draw in the kids’ attention.”

Nguyen Thi Ngoc Tam, ex-athlete and director of a gymnasium for kids, said audio and verbal interactions are important to keep the children’s morale up during online PE classes.

“Kids aged 5-10 can only hold their attention for 5-10 minutes, a number that significantly decreases during online classes as they face more distractions at home,” Tam said.

“Our online PE classes are designed in intervals of five minutes to keep the kids engaged.

“Teachers can change up the atmosphere by requesting kids to pick up something, or play music, then asking them questions about the tracks.”

For her classes, Tam incorporates many everyday items, including umbrellas as bars in arm exercises, or plastic wares as obstacles in high jump.

“Teaching teenage students aged 14 or higher would be much easier, as they are already aware of the need for a healthy lifestyl,” she remarked.

According to Tam, there should be fewer theoretical elements in PE teaching, as kids have been struggling with them in math and chemistry classes.

PE teachers should also be more empathetic, noticing their students' distress and providing them with health recommendations, Tam added.