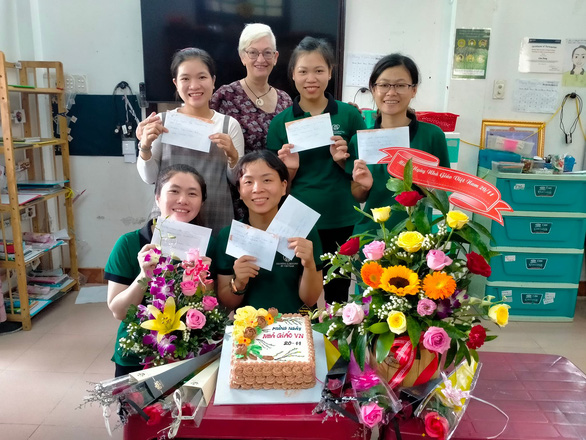 Maire McCainn, a 65-year-old Australian national, is the owner and founder of a school for special needs children in Hoi An Ancient Town, located in the central Vietnamese province of Quang Nam.

Her campus is at 203 28-3 Street, Thanh Ha Ward, roughly three kilometres away from the heart of the famous touristy town.

The 'school of silence'

Inside the humble campus, dozens of children are seen eagerly scribbling.

Equipped with hearing aids, their teachers use hand gestures to convey their ideas. Both are immersed in their lessons.

As the recess time is over, one of the instructors swiftly signs to summon the children running around in the yard, signalling to them that it is time for lesson revision.

The children are quick to resume their posts in an orderly fashion, with their eyes turning to the teacher.

Dong Thi Nhu Lien – the school manager – stands in front of a board, using her hands to indicate the date and time already written there.

The children begin to focus, pulling out notebooks from the bags and starting to practice writing letters and sentences.

“Visitors are amazed by the brilliance and good manners of the children here,” says Lien.

“Both the bigger and smaller children are trying hard to practice writing letters like first graders in normal school.

"They are still making slow progress in their literacy.

“But only that much is such a wonder to us."

Tran Van Son is the first student of this silent school. Originally from Hoi An City, he is born to a farmer couple and suffers inborn loss of hearing.

He appears as a tall handsome boy. Twenty minutes into the official class hour, he hurriedly dashes from outside with a notebook in his hand.

In no time, Son is seated at his place, passionately scribbling his words.

Before this school was opened, Son merely ran errands around his house because there was no school for special needs children like him.

His parents sent him immediately when this school came into operation.

Maire McCainn is known to the locals as 'co Mai' or 'me Mai,' which translates as 'teacher Mai' or 'mother Mai.'

These are the dearest words that Vietnamese people use to address a teacher they adore.

This former nurse from Australia visited Hoi An in 2006 when she had a family problem. This old town helped heal her pain.

Seeing the large number of disabled children uncared for, she had a change of plan.

“In developed countries, those disadvantaged and disabled children are placed in special educational institutes with tailored learning programs,” McCainn said.

“In Vietnam, this is lacking in many regions.

"I met two deaf children in Hoi An and I have been thinking about how to help them since then.”

After her journey in 2006, she returned several times to discuss her ideas with friends. She was asking around about the demand for a special needs school and the required paperwork to open up a support center for children.

McCainn received a great deal of support from both her Australian and Vietnamese contacts and soon realized her ambition.

The most devout supporter is Lien, who is currently the manager of the place.

According to Lien, it took years to meet all the legal requirements before the school could finally launch in 2011.

McCainn rejoiced on the opening day as if she had finally found the joy of life at over 50.

Teacher Mai rents the premises to run her school. At first, it was located inside the center of Hoi An Ancient Town, but later was moved to the outskirts as the number of children grew.

According to the school manager, parents from all over Quang Nam Province, which administers Hoi An, soon signed their children up when news of this school opening reached them.

Children were coming over from the province's Duy Xuyen, Que Son, and Dien Ban Districts.

The disadvantaged kids had lived a boring life with little interaction due to their family’s financial difficulties and a shortage of educational facilities.

Within months, the ‘silent school’ of mother Mai had no vacancy left. They have an annual waiting list of hundreds of children.

One uncompromisable principle in this school is that teachers will not yell at or physically punish children however rude and disrespectful the little ones can be.

Sometimes after blending in with the culture here, many children have become disciplined and displayed great manners.

Interestingly, some of the students have graduated and currently work here as teaching assistants.

The school of teacher Mai charges a maximum amount of VND800,000 (US$35) for every child. Those in financial difficulty receive free education.

This income is modest compared with the monthly cost of approximately VND80 million ($3,500), including the rent, payroll, and the children’s lunches.

To cover the expenses, McCainn has been setting aside a three-month break every year when she heads back to Australia to work as a nurse in remote areas.

Due to the lack of staff and the challenge of the work in these places, she earns a higher pay and saves up to keep her 'silent school' running in Hoi An.

Besides, she receives voluntary donations from 20 of her friends on a monthly basis, even though they are on pensions.

Teacher Mai also runs one special fundraising event: a virtual coffee meeting when she meets up with others via the Internet.

The money donated through this activity goes into the treasury of the school for the deaf.

Instead of meeting in person at a coffee shop, participants in this meeting will connect through their phones and set aside $3.62, the approximate price for one cup of coffee, for the children’s fund.

To cut down her expenses, teacher Mai has been living with a friend of hers instead of renting her own place.

Her school currently has 25 students, the smallest being eight years old and the oldest 18.

There are six teachers, one janitor and other teaching assistants.

Parents drop off their children at 7:30 every morning and pick them up late in the afternoon.

The children get to learn how to write, read, interact, and blend in with the community.

Many of them have become sufficiently skilled to enter public schools.

This 'school of silence' is also a place for vocational training for older students.