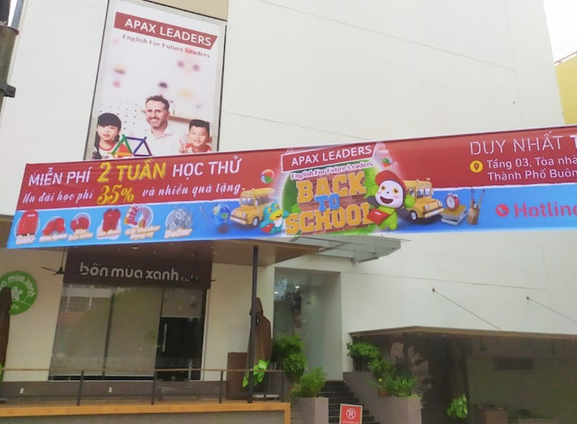 A representative of APAX Leaders made an apology and pledged to return tuition fees to parents on Thursday after Tuoi Tre (Youth) newspaper had reported on accusations against a branch of the English center chain for appropriating the tuition.

It was granted permission for operation by the Department of Education and Training of Dak Lak on April 23, 2020.

Accounts given by many parents to Tuoi Tre showed that the center received tuition fees for long-term courses this summer, but suddenly stopped all operations last month.

Hoa’s child had attended classes at the center since then until one day in August, when the student and her friends were met with a closed classroom upon their arrival and made to wait at the entrance hall of the venue until their parents picked them up.

Hoa immediately tried to find staff members at the center for clarification, but the entire venue was empty.

Hoa, Thuong, and all other parents were not informed of the shutdown in advance.

“A security guard told me that the center closed down quietly,” Thuong said.

“The director and all staff members quit their jobs and took on new ones in other places.

“Many other parents also paid tuition fees for the whole year like me and were stunned by the sudden closure.”

When the parents tried to reach out to some teachers and staff members of the center that they have contact with, they were informed on August 19 that classes would be temporarily closed on August 20 and 21 due to a server problem, and the new timetable would be announced shortly after, according to Thuong.

“However, they have given our children a long break so far, and have not made any contact with the hundreds of parents who paid tuition fees,” Thuong complained.

Representatives unaware of the case

The parents made extra efforts to contact a woman named Huong, who quit her job as the director of the APAX Leaders center in Buon Ma Thuot in July, and Dao Thai Son, a representative of the branch.

While Huong told the parents that she resigned after working at the center for only a month and was not aware of its closure, Son instructed them to have their children switch to the online studying mode.

“We paid a lot of money so that our children can study directly at the center to improve their English communication skills and confidence,” Hoa said.

“We can let our children study online without paying that much,” she added as she criticized Son’s response as inappropriate and perfunctory.

Son then assured the parents that he was working on refunding procedures, of which he could not ensure the outcome.

In response to Tuoi Tre’s request on the reason for the center’s sudden shutdown, Son said “it is not in [his] duty.”

For Huong, she said many of the parents blamed her while they transferred tuition fees to the center’s bank account, not hers.

“APAX Leaders still owes me my salary,” she added.

Tuoi Tre made several attempts to contact the southern director of APAX Leaders, but did not get a response.

The provincial education department, together with the local police unit, received denunciation letters from the parents on September 15, according to Doan Dinh Duan, Dak Lak’s deputy chief education inspector.

A delegation of inspectors has also been established to deal with the case.

“We are further verifying the number of affected students and the amount of tuition paid by the parents,” Duan said.

“In addition, the delegation asked the center to stop recruiting students and advertising courses until the problem is solved, and the Dak Lak Department of Education and Training allows them to resume teaching and recruiting activities.

“The department’s inspectors will make an official announcement to the parents and the press as soon as possible.”

On Thursday, via a response to Tuoi Tre, APAX Leaders English Center issued an apology to parents who have been affected by the incident at its branch in Buon Ma Thuot.

A representative of the chain refuted scamming parents and students out of tuition fees.

The chain stated that it neither sent notices nor directed anyone to make statements and take irresponsible actions against customers.

The statements made by individuals in Tuoi Tre’s article are not the official stance of APAX Leaders and its policies.

To ensure the interests of parents, the chain will contact them via phone calls on Friday to listen to their accounts of the incident and come up with a plan to deal with customers’ refund requests.

“We're committed to explaining the incident in writing to the regulatory agencies and delivering notifications to the media and customers,” the representative said.

The chain has identified that the incident at the Buon Ma Thuot-based center was caused by some individuals, who did not report arising problems to their superiors and failed to properly perform their responsibilities.

“We will check and handle the violations, appropriately discipline related individuals, and do not let this happen again,” the representative said.

“In the shortest time, APAX Leaders will review the operation of the entire center to correct the shortcomings (if any) of the whole system in order to ensure the quality of teaching and learning we committed.”