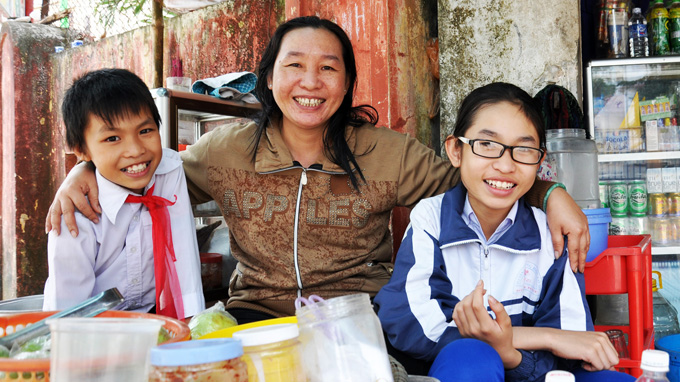 A Vietnamese woman who lost her legs during a wartime bomb raid has found the happiness she has always been looking for.

But Be, who is not a professional actress, was acting out her real sad life in the film.

In 1972, when Be was 3, a grenade exploded in the Hoa Khanh temporary shelter camp in the central city of Da Nang, killing her mother and her five elder siblings. Her father was critically injured and she lost both her legs.

Be grew up in sheer poverty and difficulty. When she was old enough, she traveled by herself to Ho Chi Minh City and the southern province of Kien Giang, and eked out her living through various jobs.

There were times when she considered committing suicide, but her love for her father kept her from doing so.

In 2000, Nguyen Thanh Van, director of “Doi cat,” was searching everywhere for a physically-challenged woman to play the role of Hao, a legless woman who yearns for love, marital bliss, and a child of her own, in his film.

Van combed many rehabilitation centers and clinics in the central region, but failed to find the person who met all his requirements, until a doctor introduced him to Be.

As Be greatly related to the character, she played the role with ease, profoundly effecting audiences.

“I have so much in common with the character, especially that we both yearn for a child of our own, which will serve as our life motivation,” shared Be.

When Be joined the film, she was pregnant with her first child.

She could not afford a wheelchair in the past 20 years and during her pregnancy, she would not walk on her prosthetic legs, fearing it might harm her fetus.

After Tuoi Tre posted an article on Be in 2001, several readers, including some from other countries, donated wheelchairs to her.

She only accepted one, giving the rest to other people with disabilities.

After giving birth that same year, she opened a sidewalk beverage cart in the central province of Quang Tri, earning a mere VND300,000 (US$14.2) a month.

Despite her overwhelming financial difficulty, Be strived to realize her other dream of becoming a disabled athelete.

Since 2003, she has pocketed several medals in national and provincial paragames.

For all her notable efforts and athletic accomplishments, Be was invited by Handicap International to take part in a parade around Luxembourg in 2003.

The parade, which drew a number of disabled people from several countries, including war-devastated countries like Vietnam and Afghanistan, was designed to create the image of dynamic disabled people and thus boost others’ confidence and motivation in life.

The parade also cemented Be’s faith in life. In 2004, she had a son with the same man who fathered her first daughter.

However, Be refused to reveal the name of the man, who deeply empathized with her motherly yearning and helped her conceive her two children out of compassion.

She considers her two children her greatest asset and an immense source of motivation and hope for her.