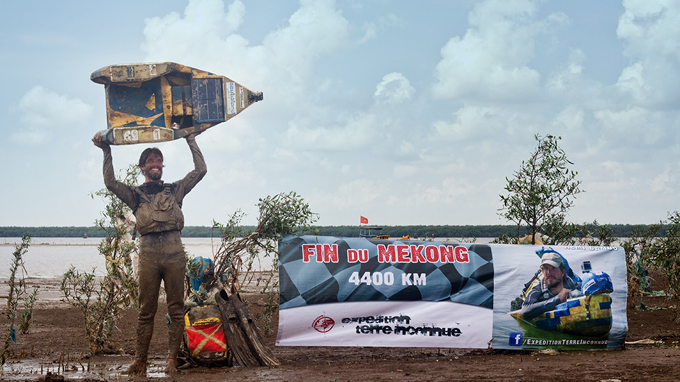 In late 2010, Camus, a restaurant manager from Geneva, Switzerland, was inspired to make his own journey for charity after reading a book about a man who jogged the entire length of the U.S.

In 2011,after some careful planning, the young man made a 5,400km, 100-day journey on foot from Melbourne to Darwin to raise funds for kids with Lowe syndrome, a genetic condition which primarily affects the eyes, brain, and kidneys.

After enduring the harsh climate and suffering from a lack of drinking water in the Australian desert, Camus decided to promote water conservation and access on his next trips.

Camus began his second trip on October 8, 2013. He crossed some 4,400km of the Mekong River, beginning in a mountainous area in China and going toward the East Vietnam Sea, eventually ending up in Cua Tieu Village, Go Cong Dong District in southern Vietnam’s Tien Giang Province.

The Mekong River, a trans-boundary river in Southeast Asia, is the world’s 12th-longest river and the 7th-longest in Asia.

To prep for the trip, the 28-year-old man stuck to a rigorous exercise schedule, including jogging for one hour, swimming some 10km, and intensive weight training.

With 30kg luggage, including specialized gear, the distance Camus covered each day varied according to the Mekong’s current.

In sections with hydroelectric dams in China, with currents as fast as 25-36km per hour, he covered some 45-50km per day at most.

“Whenever I heard a loud noise, I stopped to observe closely, being constantly wary of waterfalls or whirlpools. Checking cost me lots of time, as I took maximum caution to avoid dangers when swimming alone,” Camus shared.

He spent more than 15 days crossing a 205km section of the Delta, as relentless tide cycles made progress particularly slow or even impossible.

To local fishermen’s astonishment, he had to swim at night and slept only four or five hours a day for more than six months.

“More than a few have asked me why I chose the Mekong, and not another river, for my trip. The Mekong is only second to the Amazon in South America regarding biological diversity. However, as it crosses six countries with roughly 70 million people living along its banks, the Mekong is of particular cultural, social, and economic significance. Any negative environmental changes to its headwaters will adversely affect its downstream areas and locals’ lives,” he stressed.

Camus’ Mekong trip aimed to raise locals’ awareness of water pollution and the need for access to clean water, which is also one of Asia’s and the world’s pressing issues.

He pointed to the sharp contrast between Africans’ and Asians’ access to clean water. While Africa has seen a grave shortage of water, Asia boasts bountiful water sources that are alarmingly polluted.

During his trip, Camus always took time to share his materials with locals and helped raise their awareness about water-related issues.

He also let them watch the video clips he took of people elsewhere, who were caught dumping garbage or waste into the river.

He also spent over a month in Laos and had all his gear seized by the police due to a delay in paperwork and a misunderstanding. In addition, a rash appeared all over his legs due to water pollution.

Camus added that the Mekong’s headwaters are remarkably clean and even drinkable. However, it turns increasingly murky downstream and the sections in Cambodia and Vietnam are like huge dustbins.

“One of the common things shared by locals in Southeast Asia is that they habitually discard all kinds of garbage into the river, thus doing irreversible harm to it,” he shared.

According to the 2012 Lonely Planet, the amount of heavy metal recorded in the Mekong River is some 1,000 times more than the allowable limit.

In four years, China is set to launch eight new hydroelectric dams, which will certainly bring about negative changes to downstream areas and turn locals’ lives upside down, Camus noted.

The Frenchman, who also worked with seven schools in France to raise their environmental awareness, remarked that apart from environmentally irresponsible acts, many Vietnamese people, including those in rural areas, are quite supportive of his trip.

Many wrote on their Facebook pages that he may ask for their help with his trip.

After the Mekong trip, for which he received some €20,000 in sponsorship, Camus plans to return to Asia in early 2015 for another water project if he can manage to find sponsors.