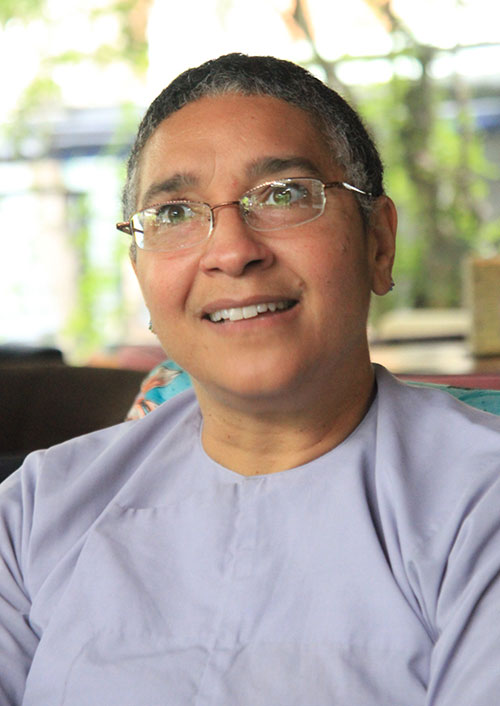 Vietnamese people are friendly yet hurried: US professor

An American history professor, who is also a devout Buddhist, is impressed by the unique Vietnamese culture, Buddhism and amiable Vietnamese people, whom she also finds to be always in a hurry.

Wendy Gaudin, a history professor at Xavier University in Louisiana, the U.S., is on a three-week visit to Vietnam.

This is Gaudin’s third visit to the Southeast Asian country since 2010, where she has always stayed at the Phuoc Vien Pagoda in Ho Chi Minh City’s Binh Thanh District.

During her stay, she has visited many pagodas, attended services, done chanting and meditation and helped the nuns with classes in public speaking and English grammar.

Gaudin shared that she used to ride past a Vietnamese temple in her hometown of New Orleans all the time, but did not know anything about it until one day when she decided to stop in and find out what it was all about.

There she met a Vietnamese monk, who had just moved to the U.S. The monk asked her to help him with his English while he would teach her Buddhism and mediation.

“Since I began practicing mediation, I have felt that my mind became clearer and I can concentrate on whatever I’m doing. I have a very difficult son and Buddhism and meditation help me become less hard on him, feel calmer as a parent and be more compassionate and forgiving toward others,” Gaudin said.

A Buddhist for seven or eight years, the American professor observed a few differences between pagodas in the U.S. and Vietnam.

In American temples, where the focus is on mediation, there is very little chanting, and sometimes no chanting at all. A few monks or nuns stay in the temples, doing physical work, studying Buddha teachings and sometimes working outside of their pagodas to earn money as the community cannot support them.

Meanwhile, in Vietnamese pagodas, the clergy and Buddhists do a lot of chanting and little mediation.

Gaudin is also impressed with the cheery, hospitable Vietnamese people.

She visited and stayed for a few days with the family of a Vietnamese friend in Binh Thuan Province in central Vietnam.

“His family was very welcoming. At the beginning I thought his parents, who are working for the government, might have prejudice against an American like me, but there was none at all. They were very happy to have me with them,” she said.

The American professor also observed that though Vietnamese people are curious just like those in many Asian countries, they are friendly and lovable.

“For example, in China, people stared at me, but they didn’t smile, and kept a distance. In Vietnam, people did stare at me, but tried to talk to me. A few days ago, at the pagoda I’m staying, a very old woman who was sitting next to me asked a nun who I was. Then the old lady reached over and started massaging my shoulders, which surprised but intrigued me,” she said.

Vietnamese people always in a hurry

Gaudin remarked that Vietnamese people tend to be in a hurry all the time.

People tend to ride their bikes carelessly, but are too hasty to say sorry whenever a minor collision happens. Some also cut queues and do not care about how others feel about that, she elaborated.

“In one of my charity trips to pagodas in Vietnam, all the activities, including praying and handing out gifts, were performed hurriedly. I kept wondering why they didn’t slow down to contemplate what they were doing,” the professor noted.

She also noticed that a number of Vietnamese people are quite pessimistic about their lives and country.

“When I first came here, I was quite shocked by the traffic and the way people drive, but now I see some kind of order in the way people drive. Streets in Vietnam aren’t very clean, and so are those in the U.S. I’ve been to many countries and observed that basically people live similarly. Different countries have their own problems, so Vietnamese people should look on the bright side and love their country,” Gaudi stressed.

Before she first came to Vietnam, many in the U.S. tried to warn her about negative things about the Southeast Asian country, including unhygienic food and rampant theft, even in pagodas, but she just ignored them.

“I haven't seen any negative things here so far. When I go back to the U.S., I will tell my friends about the amiable people I met here, the kind nuns and delectable food in Vietnam,” Gaudi said with a smile.