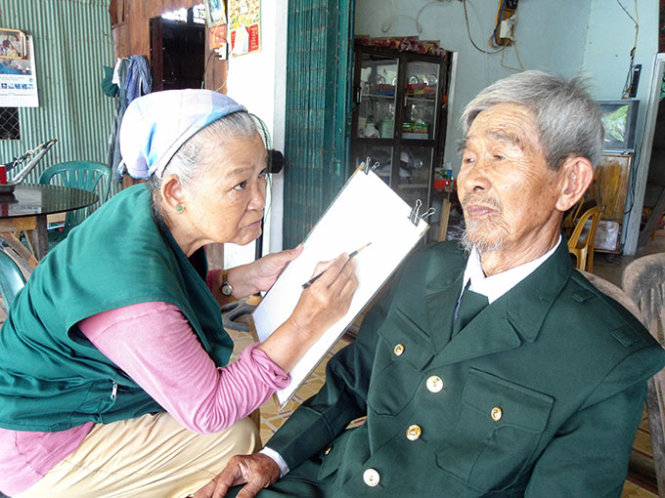 An elderly female artist has traveled to many cities and provinces across Vietnam on her bike to realize her dream project of depicting all of the country’s wartime and labor heroes in oil paintings. Artist Dang Ai Viet, 67, who was a soldier, is known for riding a motorbike to many localities and sketching heroic mothers, who are mothers of war martyrs or contributed to the country’s wars of resistance.

She is now dedicated to a new, even more ambitious project: depicting the country’s wartime and labor heroes in oil paintings, a task which is considerably more technically challenging and time-consuming than sketching the heroic mothers.

The veteran artist is currently working on an oil painting portraying Major Nguyen Van Thuong, a war invalid who was brutally tortured in 1969 by the Central Intelligence Agency (CIA) – one of the principal intelligence-gathering agencies of the United States federal government.

Thuong, now 77, has been honored as a “fighter against the American troops” 14 times and was named a People’s Armed Forces hero in 1978.

According to historical archives, he joined the revolutionaries in 1959 and was trusted with key intelligence communication tasks in Saigon (now Ho Chi Minh City) and southern Binh Duong Province for the following 10 years.

During a mission from Saigon to a revolutionary base in February 1969, when the Vietnam War was at its height, he was captured by American troops after shooting down a helicopter and killing three soldiers.

During his ensuing four years in prison, he was tortured by the CIA, army officers and soldiers after they repeatedly failed to bribe him with beautiful women and huge sums of money to get intelligence from him.

The officers then had an American doctor slash Thuong’s legs, one after the other, slicing away his flesh, muscles and ligaments.

They made sure he would not die, ensuring he would endure every moment of the excruciating pain.

After six relentless torture sessions, Thuong’s legs were amputated above his knees.

Still, the CIA officers failed to get a single word out of him regarding his role in the Vietnamese revolutionary force.

Thuong’s face is depicted as a kind yet steadfast soldier through Dang Ai Viet’s brush strokes.

The artist had to seek permission from the Ministry of National Defense, which then instructed lower-ranking military units where the wartime heroes belonged to facilitate her work.

Viet began her oil painting project around June 2013, after she finished sketching the heroic Vietnamese mothers.

The first hero she portrayed is Hong Phu Ngu, a captain who sank four French battleships during wartime in Vietnam.

The frail 89-year-old veteran, who was named a People’s Armed Forces hero in 2010, is leading a frugal life in a plain house in Ho Chi Minh City, Viet said.

She added the heroes she has depicted are aged between 60 and 90. Some remain fit and sharp-minded, while others are decrepit, senile or hard of hearing.

“It’s really great getting to see them, reliving my wartime years through their vivid yet fragmented accounts and emotional personal stories. Tears sometimes keep rolling down my cheeks while I sketch them. Their families always give me a warm, cordial welcome,” Viet said.   The artist typically sketches her subjects and gives them the finished work before taking snapshots of them or even videotaping them.

The photos and videotapes serve as an immense source of inspiration for her to portray them later.

“The oil painting project is much costlier and more time-consuming than my previous project of sketching heroic mothers, but the rewards are beyond comparison,” she added.

Viet said she has met, sketched and taken photos of 210 heroes of Military Zones 7 and 9.

“Many live in remote areas or take shelter in shabby makeshift homes. Still, they keep cherishing their glamorous wartime years and make light of their sacrifices and contributions,” the artist shared emotionally.

She underlined her determination to pursue this project to the very end and depict all the living heroes, who she says have inspired her immensely.

Through the years, Viet has covered over 33,000 kilometers through many cities and provinces including Lam Dong in the Central Highlands, Binh Thuan in the central region, and Binh Phuoc, Can Tho, Ca Mau, Kien Giang, and Bac Lieu in the south. Her faithful companion is a Chaly motorbike.

She said she traveled around 200-300 kilometers on average each day and once covered over 400 kilometers from Nha Trang City in the central province of Khanh Hoa to Ho Chi Minh City in a single day.

The artist confidently said she can handle on her own most minor problems with her bike, including flat or punctured tires.

Her perseverance and toughness perhaps stem from her wartime activities.

At 15, Viet joined the Vietnamese revolutionary force and was the only female member in one of the first art classes organized after 1975 when Vietnam was reunified after years of war, she recalled.