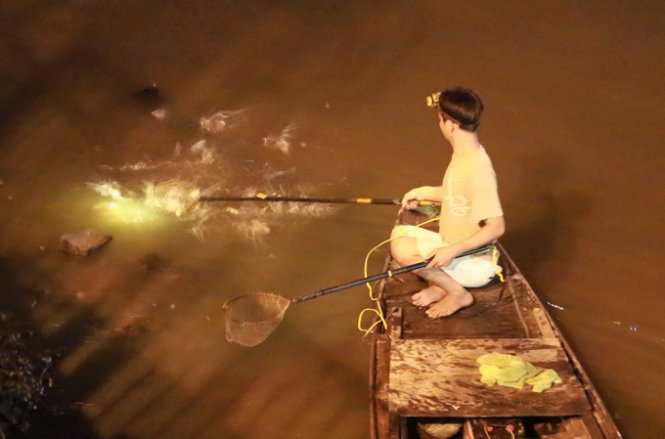 A Tuoi Tre (Youth) newspaper investigation has shown that a number of mindless residents have elevated angling along a revived canal in Ho Chi Minh City from an undesirable pastime to an ecologically damaging livelihood by electrocuting fish.

A remarkable makeover has been given to the canal, turning it from a ‘dead’ canal into the one teeming with life and shoals of fish, after phase 1 of an environmental sanitation project, which covers the basin of the Nhieu Loc-Thi Nghe Canal, was completed in August 2012.

The phase was invested with more than US$300 million, according to sources from the World Bank.

Despite the government’s tremendous efforts to bring the once-dead canal back to life including growing greenery and raising fish, anglers keep defying fishing bans and crowding the canal banks.

They use malicious fishing means, including rods, each of which has up to five hooks to catch as many fish as they could in the shortest period of time.

Based on tip-offs provided by readers who reside in the proximity of the canal, Tuoi Tre reporters’ two-week observation has revealed that many have even brought along nets and electric spears for ‘bumper catches,’ particularly during low-tide periods in the evening and well into the night.

According to experts, these methods are ecologically damaging because they kill fish en masse, including the young, and adversely impact their habitats.

With their cameras, the reporters captured one of the fishermen’s daily routines which began early Saturday morning.

They came from the Xuyen Tam Canal – one of the Nhieu Loc-Thi Nghe Canal’s tributaries – in Binh Thanh District and from the Saigon River.

The fishermen brought along professional kits, including nets and electric spears, and managed to catch between 10 and 20 kilograms of fish of different varieties each night.

They either sold their catches retail right on the spot or distributed them wholesale to dealers at local markets.

During low-tide periods, many even waded into the canal and used nets to catch bucketfuls of fish.

A man is pictured casting his fishing net on a section of the canal beneath the Dien Bien Phu Bridge in Binh Thanh District. Photo: Tuoi Tre

Scientists warn that fish thriving on the city’s once-contaminated waterways are generally prone to high concentrations of heavy metal and toxins, and thus are likely to do harm to consumers’ health.

The government has yet to issue any ban on the practice, but only prohibits fishing with electricity.

Pursuant to a regulation of the Ho Chi Minh City People’s Committee, those using nets to catch fish from canals that are used as waterways will be fined as it poses danger to waterway traffic, Nguyen Bat Han, deputy chief inspector of the Department of Transport, told Tuoi Tre.

As stipulated in Decree 128 issued in 2008, people catching fish using electricity will have their kits confiscated.

As tides recede around 1:00 am and 2:00 am every day, the canal teems with fishing activity and commotion as the fishermen maneuver their boats into Nhieu Loc-Thi Nghe, ready for a night’s catch. Photo: Tuoi Tre

A young man is shown wading in the canal bed during a receding tide period and scooping up fish. Photo: Tuoi Tre

A man is seen taking a nap right on his sampan while waiting for the tides to retreat to catch fish using electricity. Photo: Tuoi Tre

A fishing boat docks on the Xuyen Tam Canal, one of the Nhieu Loc-Thi Nghe Canal’s tributaries, to sell its catch to locals. Photo: Tuoi Tre

Fishermen attentively watch a man hooking a large catfish as he is perching precariously beyond the bridge handrail. Photo: Tuoi Tre

Hang, one of the dealers who buy fish caught from the Nhieu Loc-Thi Nghe Canal, sell them retail at Nho Market, located in Binh Thanh District. Photo: Tuoi Tre