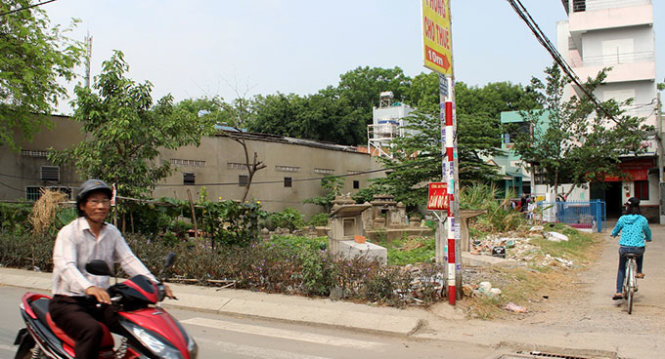 Instead of performing solemn burial rites, a number of residents in Ho Chi Minh City choose to discreetly bury their deceased relatives around their homes in residential areas, which vexes their neighbors and poses worrying health hazards.

Many city dwellers in several districts throughout the city, including District 12 and Go Vap, have ignored warnings from local authorities against the continuation of their long-standing practice of laying their relatives to rest right in their neighborhoods, which are located in residential areas.

They still erect new shallow tombs in their own gardens or their lineages’ grave zones.

At midnight on March 26, a family which lives in an alley in District 12’s Hiep Thanh Ward secretly put their loved one in the ground right in their ancestral grave zone.

The zone is located in close proximity to inhabited houses.

N.T.T.T., an alley resident, told Tuoi Tre (Youth) newspaper reporters that as soon as the elderly woman passed away, she and others notified local authorities of that family’s plan to bury her at midnight that day, though the obituary at the funeral read that the deceased woman would be cremated at a large cemetery in the city.

The local authorities told T. that they worked with the family, who assured them they would drop the plan.

The zone’s 'population' has risen from over 10 tombs previously to dozens now.

It has also ended up as the final resting place for those not biologically related to the lineage who owns the zone.

The Tuoi Tre reporters’ investigation revealed relatives of the deceased who are outside the lineage spend around VND35 million (US$1,631) on such resting spots.

T., a local official and member of the above lineage, has repeatedly talked such families out of building new tombs which pose imminent health threats.

Her advice remains unheeded, however.

“A family also laid their dead relative to rest at 3:00 am in the zone on March 22, though they had assured local authorities that they would have the deceased cremated in another province. Exactly one month later, another departed person joined that one for company at around 2:00 or 3:00 am,” T. divulged.

N.V.L., another member of the lineage who owns the grave zone, showed the Tuoi Tre reporters around the zone.

L. pointed to a new casually cemented tomb, which was erected on the morning of April 22.

The tomb is well disguised as it has no gravestone and does not protrude from the ground.

According to Ho Quoc Viet, chair of the Thoi An Ward People’s Committee, only a quarter of the ward’s population has access to clean water, while the remainder still uses water from wells for daily consumption.

Several graves are seen near houses on Street No. 7 in Thu Duc District. Photo: Tuoi Tre

A spontaneous lineage graveyard, which measures around 500 square meters in area and is the final resting place of over 10 graves, also looms on An Hoi Street in Go Vap District’s Ward 13.

Nguyen Thi Thu told Tuoi Tre that she purchased the entire land plot in 1987 after the land owner promised to promptly relocate the tombs in the area.

Three or four years ago, Tran Le Thuy, a relative of the former land owner, met Thu and reached an agreement that all the tombs would be removed.

According to those living near the graveyard, Thuy did hire workers to exhume the remains and reposition the graves, but she met with fierce objection from the deceased’s relatives.        The relocation then ground to a standstill.

According to Nguyen Quoc Hung, deputy chair of the Hiep Thanh Ward People’s Committee in District 12, the city has stipulated that the deceased be buried far from residential areas.

“We are powerless as such violators perform the burials in wee hours, though we have slapped administrative penalties on them for using their land for wrong purposes,” he stressed.

The municipal Health Department regulated that the dead are not to be exhumed before three years from the burial date, Hung pointed out.

Those who contracted contagious diseases during their lifetime will not be dug up until after five years from burial.    “We thus can’t impose forced grave relocation on new graves, which poses tremendous hurdles in our environmental protection tasks and ensuring proper land use,” he noted.

Graves are seen under construction at a residential area located on Huynh Tan Phat Street in the outlying district of Nha Be. Photo: Tuoi Tre

The municipal government has given cash support to a number of groups for the cremation of dead bodies since March 20 in an attempt to encourage the method.

The assistance ranges from the whole cremation fee to VND2.5 million ($117).

The People’s Committee of Go Vap District’s Ward 13 has taken many measures to persuade those who run lineage graveyards to allow exhumation of their departed relatives from 2014 to 2016.

Nguyen The Dung, the committee’s vice chair, said they have managed to relocate some 10 graves.

The ward is 'home' to 89 such tombs in housing areas.

Dung added that the committee has assisted locals in completing paperwork to get the graves relocated and provided them with VND300,000-400,000 ($14-19) for each displaced tomb.