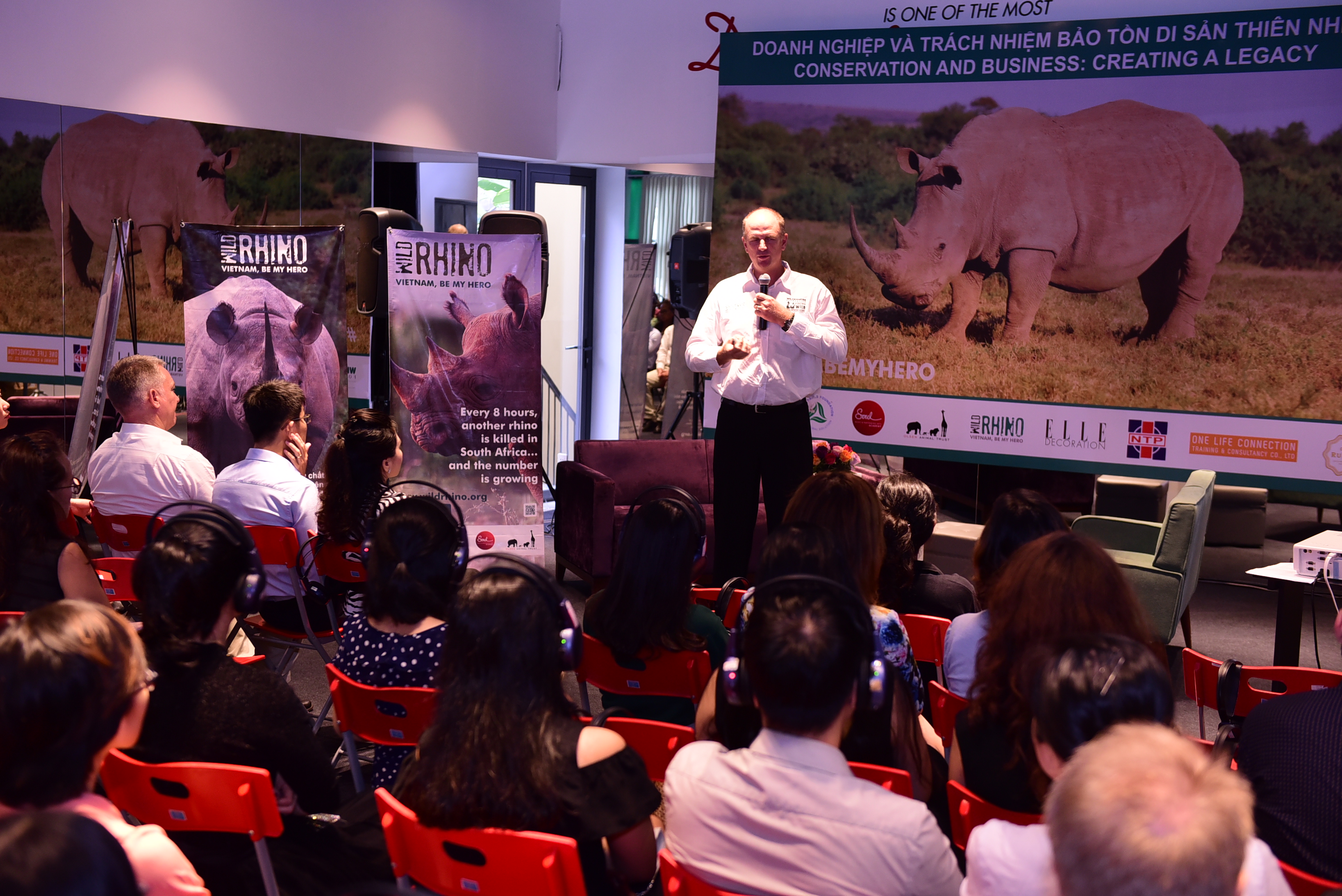 Editor’s note: Tuoi Tre News talked to Dr. William Fowlds, a wildlife veterinarian and project coordinator of the Wilderness Foundation Africa, which works to rescue poached rhinos and give them back their lives.

According to the Wilderness Foundation Africa, if the current poaching rate continues, itis possible that this year will see more rhinos killed than born. If this trend goes on then it is also possible that by 2025 African rhinos in the wild will have become extinct.

The bloody images of rhinos that have been poached for their horns have touched people, as most of them eventually died.

However, among the poached rhinos, some have been lucky enough to survive with the help of rescue teams and wildlife veterinarians in South Africa.

Dr. Fowlds was attending a seminar titled “Conservation & Business: Creating a Legac” hosted by the Wilderness Foundation Africain Ho Chi Minh City on November 29, when he agreed to sit down for an interview with Tuoi Tre News.

Can you tell us how long you have worked together with the rescue team? And how many rhinos have you rescued?

2010 was the first year that I saw a rhino which had been poached and dehorned. It was a terrible, haunting image.

In 2011, we rescued our first rhinos. Since then, our team has rescued 14 rhinos in total. However, from what I know, South African conservation organizations who rescue rhinos that have survived poaching incidents have saved about 100 rhinos already – an encouraging number, but still not enough. The number of rhinos that have been killed by poachers in the last 10 years is around 7,245.

According to the Department of Environmental Affairs in South Africa, the number of poached rhinos in 2016 was 1,054.

What are the most important factors in poached rhinos being rescued and recovered?

There are three things that I think are the foundation of rescuing a dehorned rhino.

First is the condition of its head and facial injuries. Second is the damage done to the internal organs and the rest of the body. And last is how early the rescue team is informed.

Sometimes we are only informed after two or three days. Each hour is valuable in rescuing rhinos injured by poaching.

Can you describe the procedure of rescuing a rhino?

On detection, it will take us from one to three hours to drive to the crime scene. On the way we will communicate and coordinate with other divisions. Because this is a crime scene, we will also need police and cold scent tracking dogs to help chase the poachers. The crime scene has to be protected for the investigation.

In the case that a rhino is still alive, the rescue team and veterinarians first have to help the rhino to stand up. If it can’t stand up, it is a bad sign, as there is most likely internal organ damage and the chances of survival are really slim.

After that, we will proceed with medical treatment and try to get samples to determine the condition of external and internal injuries. We will then give the rhino antibiotics and painkillers. The following day, we will continue treating the rhino.

We don’t take them back to the rescue and rehabilitation center immediately as it can agitate the patient [injured rhino] and he/she could possibly die. However, we will place a tracking device on the injured rhinos, assign security guards and make sure that the rhino is not poached again after it returns to the wild.

What is the cost of treating one injured rhino?

We need at least US$20,000 for each treatment. A more difficult case would require up to $50,000 to rescue just one rhino. You also need to take post-treatment into account, which could continue for years.

The rescue team will need at least two to three people, one anesthetist, one surgeon, and one nurse. In addition, there is also a support team of 10-20 people to lift and rotate the rhinos.

How do you feel when you witness a rhino dying despite your team’s efforts?

Life and death are inevitable in life. However, the unreasonable, nonsensical and horrific death, to me, is painful and we sometimes can only cry and do nothing.

Every rhino killed from poaching is a waste of a beautiful creature of nature and the continued trend of poaching makes me feel hopeless. We see the importance of finding help from Vietnam in order to stop the killing of rhinos for their horn.

With advances in wildlife veterinary care, why is rescuing a rhino still a big challenge?

When we were still in school, we were never taught the technical skills to treat the type of serious injuries we are seeing these days.

Now when we work with injured rhinos, everything the team is doing is to try to meet the practical requirements of care for the rhino.

When we first started treating poached rhinos in 2011, we didn’t have any documentation or research about the anatomy of rhinos’ heads, skeletons, and circulation systems. We basically learnt as we went.

Do you have anything to say to our readers and the Vietnamese people during this visit?

I see your homeland as a beautiful country with kind-hearted and friendly people. I even sat on the back of a motorbike in Hanoi when I visited Vietnam a few years ago!

Regarding rhinos, I think there are more effective and different ways than looking to the rhino horn to cure diseases. I believe if the Vietnamese people knew the effort and cost involved in the criminal rhino horn trade, they would understand that we could invest these costs in positive things like medicine and education. I believe that they will make the right choice.