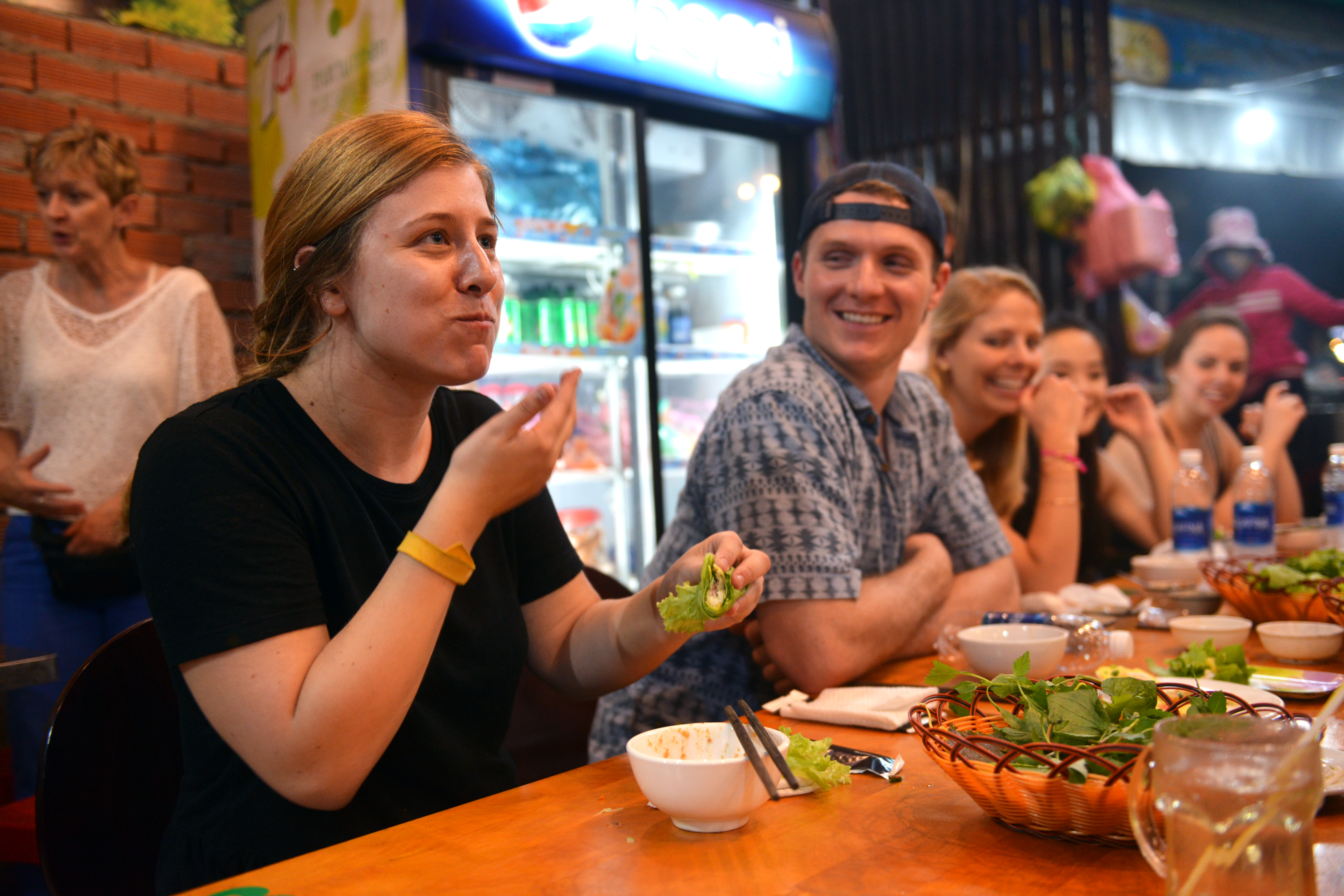 While Vietnamese cuisine has become increasingly popular with global diners, with two of the most delicious being phở (beef noodle soup) and bánh mì (Vietnamese-style sandwiches), many foodies have said that Vietnam still has more stunning foods to taste.

One night in late 2017, Rachael Dickson and her younger sister Madeline Dickson were sitting on a bamboo chair at a restaurant in District 3, Ho Chi Minh City.

They were attentively listening to a tour guide explaining the components of bún bò Huế (spicy Hue-style beef noodle soup).

When the tour guide was twittering on the vegetables served with the soup, the two sisters could not conceal their surprise knowing sliced banana flowers were among the plants.

To these newcomers to Vietnam, everything seemed to be new, as what they had known about Vietnamese food were only phở and bánh mì.

“I even didn’t know they put pâté in bánh mì and had also never had so much fish sauce in my life,” Madeline Dickson excitedly told Tuoi Tre News.

Bún bò Huế was one of the ‘stops’ of the food tour that the Dicksons and their friends from the U.S. were taking.

At the previous stop, the group rode pillion and were taken by their tour guides on motorbikes to a small restaurant which served specialties from Phan Rang, a small town in south-central Vietnam.

Zachary Devaney, a member of the group, said Vietnamese cuisine was way different from what he thought he knew.

“I only knew about bánh mì and phở, but after coming here I was stunned by the diversity of foods here,” he said.

Chinese-American Jennifer Xue added that she learned a lot about local cuisine after she was told what were in her dishes.

"I like the combination of many flavors into a dish, like when we had bánh xèo [Vietnamese sizzling pancakes] with many kinds of vegetables and fish sauce,” she said.

According to Dao Xuan Thinh, a tour operator at Saigon Food Tour, which organized the food tour for the Dicksons and friends, his company places an emphasis on introducing dishes that have not been known very well in other countries.

The firm’s intention is to bring tourists a more diverse and authentic experience with Vietnamese cuisine, he added.

Meanwhile, South Korean Kim Joon Ha has had the opportunity to try Vietnamese food after his two visits to Vietnam in recent years.

In his third time in December, Kim spent time visiting a local family to cook and enjoy a daily meal with them.

The kitchen of host Tran Thi Minh Thao’s house in District 10 became more dynamic thanks to the appearance of Kim, who joined the Traditional Meal Tour organized by the Saigon Hotpot tourism club.

While learning how to cook some dishes that Vietnamese people often have daily, the man from the land of kimchi enthusiastically talked about the foods he tried in Vietnam, from mì Quảng (Quảng-style noodles) to phở bò, gỏi cuốn (Vietnamese spring rolls) and more.

He was also stunned to learn that some Vietnamese people believe that eating balut (a boiled, fertilized egg) can help reverse their bad luck and agreed to try one.

Thao, who has been a friendly host of Saigon Hotpot for years, was not hesitant to go straight to the nearby market to buy some such eggs and boiled them for him.

Kim admitted he really loved the experience which allowed him to see the “authentic” way that Vietnamese people have their ordinary meals.

“Vietnamese foods are very famous in Korea but people only know about phở. I also know some dishes but I’m curious about what Vietnamese people truly have in their meals daily,” Kim told Tuoi Tre News.

The sweet and sour soup

Many food lovers also want to try making the Vietnamese dishes they love.

Despite their short stay in Vietnam, they spent time in some cooking classes that make their dream come true.

At a session to teach how to cook canh chua (sweet and sour soup), a kind of soup popular in southern Vietnam, by M.O.M. Cooking Class, Tennessee man Brad Howell and his wife carefully observed the chef when he was preparing such ingredients as garlic, tamarind sauce and all the herbs for the soup.

“Is this a popular soup in Vietnam?” Howell added, before to getting the answer that the soup as a favorite of southerners.

“This is fantastic. We did not only learn how to cook but were also taken to a local market where we met local people,” the man said.

Meanwhile, Kayla Lake from California said she got used to Vietnamese foods since she was young, as she has lived in a neighborhood with some Vietnamese people.

That is why she was eager to learn how to cook a Vietnamese dish.

However, the young woman was surprised when she came to Vietnam and discovered the diversity of foods after she were shown more than 10 different types of noodle.

Also joining the class, Korean Jay Park and his wife were impressed with the amount of vegetables, especially herbs, used for the canh chua.

“This is the first time I’ve cooked this and I’ve realized that in only a short time, we could still make such a dish with rich flavors,” Jay said.

M.O.M. Cooking Class founder Nguyen Dinh Le Hoa said besides explaining the ingredients that Vietnamese often use, his cooking classes also offer a “modern” version of each dish when showing his learners the way to replace some Vietnamese ingredients they might not find back home.

One of the oldest cooking classes for foreigners in Ho Chi Minh City, the Vietnam Cookery Center in District 1 was where American Miriam Guzman and her fiancé came to learn to cook phở bò, cuốn diếp (mustard green rolls) and gà kho (stewed chicken).

Before carefully putting all the spices into her clay pot of chicken, Guzman and her fiancé Gaurav Ajmani tried to tie their rolls with boiled scallions.

Guzman said food was one of the main reasons that urged the couple to visit Vietnam, adding that they love foodstuffs of diverse flavors and vegetables so Vietnamese dishes became their top choice.

According to Le Dang Khanh Linh, a representative of the Vietnam Cookery Center, the class menus are designed to showcase the diversity of Vietnamese cuisine through the foods from north to south.