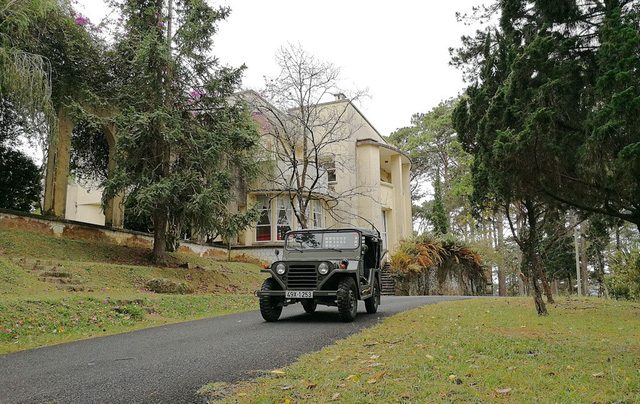 An exquisitely designed, age-old binh phong (a traditionally-styled, Fengshui-friendly partition) rich in historical significance is an alluring feature of the Palace 2 in Da Lat.

At the Governor-General’s Palace (now Palace 2), used by the Lam Dong People’s Committee as a guest house and convention space, hangs an age-old binh phong which intrigues visitors with its decorative patterns.

Da Lat is a resort town blessed with a temperate climate and acts as the unofficial capital of the Central Highlands of Vietnam.

During the first half of the 20th century, the French all but built Da Lat into a ‘romantic French town’ of their own on the Lang Biang Plateau, replete with hallmark European features.

At the time, the town was a hotspot for both Vietnamese and Europeans based in Indochina wishing to ‘experience a natural paradise’ by either owning a villa or visiting it at least once in their lifetime.

Until the 1950s, Indochina had 34 governor-generals from Paul Doumer to Jean Decoux and Da Lat had 10 mayors, all of whom shared the dream of developing the town, then referred to as the ‘son of romantic imagination and the iron of French ambition.’

His reforms, which were designed to undermine Japanese influence in the area, unwittingly helped lay the foundation for Vietnamese resistance to French rule after the war.

The last governor-general of Indochina, Decoux spent more time in Da Lat at the time of Japanese troop advancement in Indochina.

During this period, he ordered the construction of a summer mansion on an area of 26 hectares in Da Lat, where he retreated to and worked during the summertime.

Work on the edifice, designed by A. T. Kruzé, D. Veyssere, A. Léonard, and with an interior decorated by P. Foinet, commenced in 1933 and was completed in 1937.

The Governor-General’s Palace is a stately home that boasts 25 elegantly-furnished rooms and a spacious courtyard which offers a gorgeous vista of Cu Hill, Xuan Huong Lake and the fog-capped Lang Biang Peak.

Decoux also had several fortified secret passageways built for movement of people and goods, and to ensure his own and his family’s safety.

Researchers believe the partition was brought by King Bao Dai (1913-1997), the country’s last king, from the Royal Palace in Hue, the country’s then capital, and gifted to Governor-General Decoux to mark the palace’s inauguration.

However, other pundits suggest that Ngo Dinh Nhu (1910-1963), a Vietnamese archivist and politician, brought it from the Hue Royal Palace to embellish the Governor-General’s Palace during his stay there after the Japanese took direct control of the incumbent government and ousted Decoux in March 1945.

According to Pham Phu Thanh, a lecturer in Han-Nom (Han is a written language which uses ancient Chinese characters while Nom is a demotic script based on Chinese characters and formerly used to write Vietnamese) at Da Lat University, and Dr. Nguyen Huy Khuyen, a pundit in Oriental Studies, the cherished partition was crafted from a variety of rare woods.

The stylized rectangular divider is composed of 10 planks, each of which is 45cm wide and 3m tall.

The item, which also has stands, is collapsible and detachable for easy transport.

The decorative object is relatively common in today’s Japan and South Korea.

The partition also boasts ornate embellishments on both sides, with rich images of regal sheds, monuments and courtyards on one.

The other is adorned with poems carved in a distinctive paper fan shape and intertwined with images of flowers, vases, furniture and floral seams.

Dr. Khuyen noted that the ornate patterns are typical of Vietnam’s royal art.

Renowned artisans, who were trusted by the king to engrave the verses on the partition, fused calligraphy and paintings to create distinctive hues for each of the poems, Dr. Khuyen added.

Dinh Ba Quang, a former official at the Lam Dong Department of Culture, Sports and Tourism, considered the partition an antique rarity which was also promoted Oriental culture and Vietnam’s history to the outside world.

The collectible, which dates back to the 19th century and was perhaps bestowed to King Tu Duc to decorate his studio, is also rich in historical significance, he noted.

According to Dr. Nguyen Van Hoa, a cultural researcher and member of the Hanoi Writers Association, partitions ensure auspicious feng shui, a Chinese belief system that studies people's relationships to their environment, especially their home or workspace, in order to achieve optimal harmony with spiritual forces believed to influence all places, and serve as decorative items at century-old mansions.

The long-standing Vietnamese practice of placing partitions inside homes has a deep root in Chinese culture.

Vietnamese partitions, which come in a wide variety of shapes, materials and styles, are generally designed to add coziness to homes and shield family members from adverse influences or evil spirits.