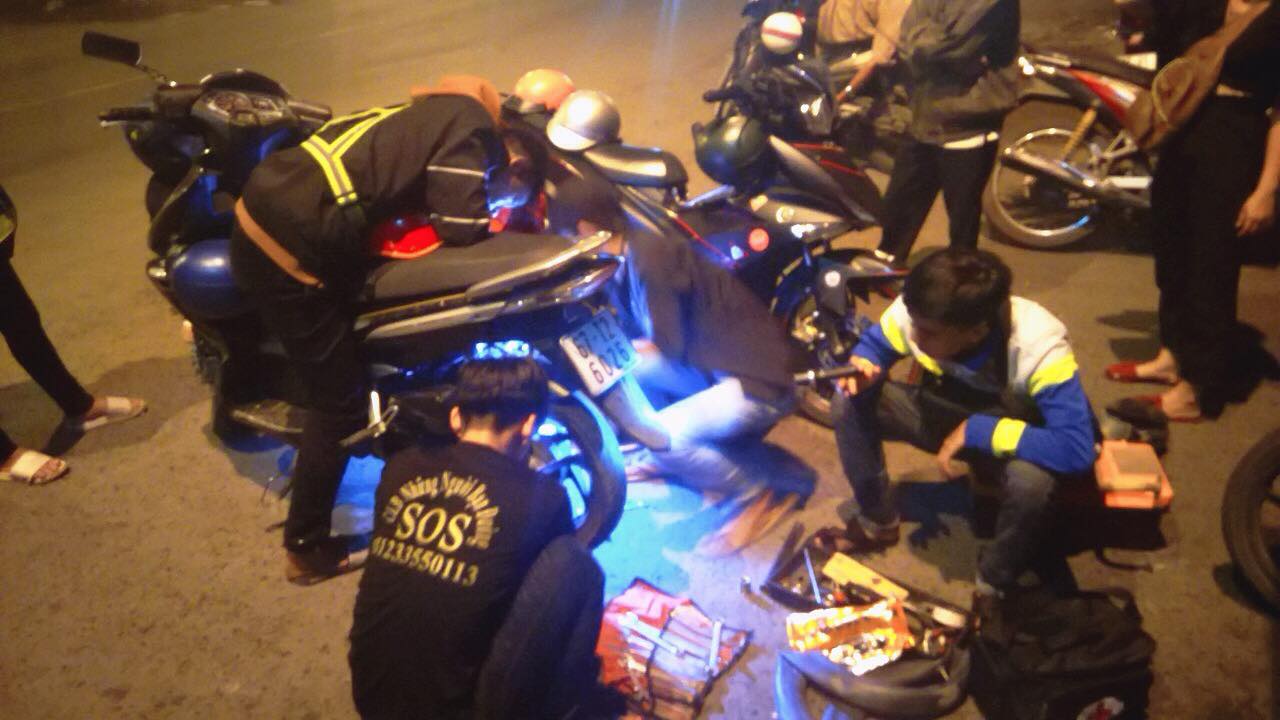 In Lap Vo, a rural district of Dong Thap Province in the Mekong Delta of Vietnam, people do not have to worry about any issues with their vehicles even at late hours as the SOS Lap Vo - Friends on the Road team is always more than willing to help.

The team, whose members are mainly youngsters, fixes motorbikes free of charge for late-night commuters.

At 8:00 pm every night, members of the group would gather at the meeting point near the People’s Committee of Binh Thanh Commune.

Some members have to come straight from their day job, including the leader of the group Dang Nhut Thanh, who barely has enough time to buy himself a portion of rice, a common Vietnamese budget meal, hoping that he would have time to eat his dinner before the first emergency calls.

However, before the young volunteer began eating his dinner, the group’s hotline started ringing, so the young man, along with four others, hurried to the scene to help.

The emergency case was a woman driving from Kien Giang to Binh Duong Province, but she had a flat tire on her way.

It only took the group 15 minutes before the woman could be back on her way home.

“It was already dark, the area was quite secluded, and I didn’t know what to do,” the woman said.

“Luckily, people in the area saw what happened to me and called the group to the rescue.

“I am truly indebted to these youngsters.”

Even though it might seem as a rare occurrence, this is the SOS Lap Vo members’ daily routine.

Throughout the night, the hotline keeps ringing with different cases that need to be attended to, so the work is divided among the members.

SOS Lap Vo currently consists of 20 members with 13 of them being regular participants who are divided into two shifts, which are Monday-Wednesday-Friday and Tuesday-Thursday-Saturday.

On Sunday nights, all members come to help.

Beside two volunteering students, the other participants mostly work and live in Lap Vo District, according to Dong Thap News.

Some members live almost 30 kilometers away from the village so by the time they get home, it has already been dawn.

All members remain enthusiastic even though many judge that it is unnecessary.

Inspired by own experience

The leader of SOS Lap Vo is Dang Nhut Thanh, but the idea originated from Dang Van Phu Qui, a student at the Continuing Education Center in Lap Vo.

The young student once had his bike broken down late at night after attending school but he could not find a repair place, so he had to walk it for the rest of the way.

He also saw many people in the same situation, a lot of them being his classmates and friends.

Having had the idea for a while, he shared it with Thanh and others.

In March 2018, SOS Lap Vo - Friends on the Road received official permission for operation from the Vietnam Youth Union Committee of Lap Vo.

Ever since, the group has helped over 100 cases, sometimes even up to six cases in a night.

“After the first few days, I thought we were going to give up because it was too tiring,” Qui said.

“I really did not think we would last until today.”

In order to have the funds to help others, the group sets up a small budget to which each member contributes a certain amount of money.

For the time being, repairing flat tires is free of charge, but for other cases the owner of the vehicle only has to pay for the replacement parts.

Regarding the tools and fundamental equipment, the volunteers have bought them themselves.

“The biggest problem at the moment is the lack of funding,” Thanh said.

“Even though it may not seem like a lot of money, it is quite considerable compared to our incomes.”

One of the benefactors in the area sponsored insurance for the whole group.

“If we feel discouraged, we try to recall the reason why we decided to establish the group to keep striving,” the group leader said.

“Whenever we see someone in distress being helped, we are motivated to keep moving forward.”

Having acknowledged the group’s effort, local authorities awarded the SOS Lap Vo - Friends on the Road club a certificate of recognition along with a fund of VND5 million ($214) to support the operations of the enthusiastic volunteers, according to Dong Thap News.

Dang Huu Tam, chairman of the People’s Committee of Lap Vo, expressed his appreciation toward the team’s charitable actions, and his promise to always support the club’s good deeds.