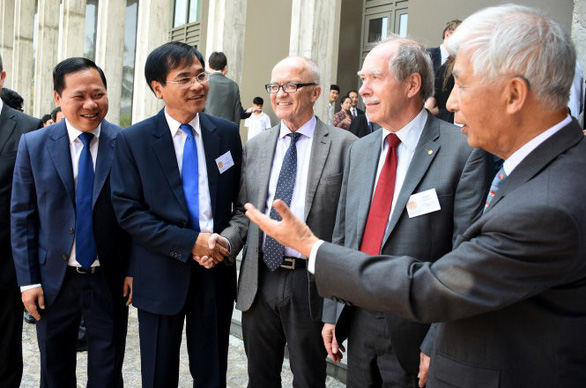 A Vietnamese professor has spent the last 53 years inviting internationally recognized scholars to conferences in Vietnam to participate in a series of events meant to connect the country’s academics with their world-renowned peers.

Tran Thanh Van began his mission to connect local academics with foreign scholars in 1966, doing his best to invite foreign scientists to Vietnam despite a U.S. embargo on the Southeast Asian country in place until 1994.

Over the course of his career, he was able to establish an association that attracted many foreign scientists and created opportunities for up-and-comers in the country’s science community through various scholarships and conferences.

His work is credited as a major contribution to the development of scientific scholarships in Vietnam.

In a small town called Moriond in the French Alps, Van and two of his French colleagues held a conference for physics academics in 1966 – the Vietnamese professor’s first attempt to connect Vietnamese scholars with those from different countries.

Almost 30 years later, in 1993, he established “Gap Go Viet Nam,” Rencontres du Vietnam, or Meet Vietnam, an association that serves as a bridge between Vietnamese academics and their international counterparts.

The association allows scholars in Vietnam to access the latest discussions, discoveries, and studies taking place around the world.

Thanks to his reputation as an academic, despite the U.S. embargo on Vietnam until 1994, the first Rencontres du Vietnam conference in 1993 witnessed the participation of many academics from the United States, including physicist Jack Steinberger who discovered muon neutrino in 1962.

Two years later, the second conference was organized with the participation of 220 scholars from 40 countries, highlighting the academic world’s growing interest in Vietnam.

“I want young scholars to have the opportunity to meet one another, while also meeting the greatest physicists of the world, have access to pioneering ideas from which they might be inspired to embark on outstanding research endeavors, and increase Vietnam’s presence in the international physicist community.”

Rencontres du Vietnam has also held workshops where acknowledged scholars awarded Nobel or Dirac prizes have been on hand to meet and talk to Vietnamese students.

Since then, similar activities have been held at each Rencontres du Vietnam conference.

Meeting students is not the only effort Van has made for the Vietnamese youth.

Over 35,000 Vallet scholarships were awarded to students with passion and outstanding performances to afford them the opportunity to study abroad and explore the world’s body of knowledge so that they might come back and contribute to their country.

The association also became a premise for the establishment of the International Center for Interdisciplinary Science and Education (ICISE) in 2013, one of Van’s most well-known accomplishments.

ICISE is located in the coastal city of Quy Nhon, the capital of the south-central province of Binh Dinh, far from the hustle and bustle of Vietnam’s mega cities.

“Science-related activities need a peaceful place so that the scholars do not get distracted," Professor Van explained.

The program has not only brought many scientists to Vietnam who were willing to stand with the nation, but has also opened opportunities for students, scholars, and politicians.

“I can say at this moment that Vietnam is a leading country in Southeast Asia in terms of Theoretical Physics and Fundamental Physics,” the Vietnamese professor said in 1990.

Van was confident in the Vietnamese intellectual class and was not the only internationally recognized scholar to think that way.

“Why don’t you [Vietnam] ever dream of becoming a great power in science?” James Cronin, an American physicist who won the Nobel Prize in 1980, questioned.

Developing countries have a common misconception that it is only important to apply science to real life, rather than understand its fundamentals.

However, fundamental physics is an important part of science, which means it plays an important role in modern civilization and shapes our society, Professor Cronin added.

“I can rest in peace and let go if I could see Vietnam’s physicists make a leap,” Cronin said.

From 2010 onward, many Vietnamese scholars have made names for themselves internationally including Ngo Bao Chau (Fields Medal 2010) and Dam Thanh Son.

However, both Chau and Son did not study in Vietnam, instead choosing to pursue education abroad.

“Vietnam still needs internationally standardized universities, because without research centers and institutions, the country will keep losing their intellectually outstanding individuals,” Professor Dam Thanh Son, one of the most outstanding theoretical physicists at the University of Chicago in the U.S., said.