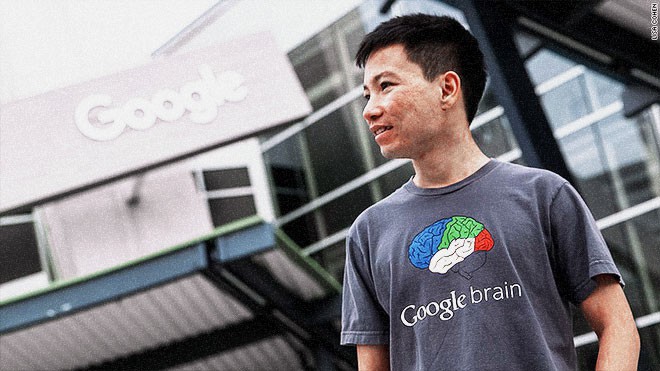 Vietnamese national Le Viet Quoc is quickly making a name for himself in Silicon Valley as his contributions to Google’s revolutionary Artificial Intelligence (AI) projects related to Google Translate and Google Search continue to push the two platforms forward.

Quoc made the MIT Technology Review’s list of top innovators under 35 in 2014 thanks to his work developing image search and speech recognition software, and now helps employ some of that technology as one of three project leaders at Google Brain – a Google research team specializing in AI and machine learning.

He is also working with other Google divisions to help improve Google Translate.

At the time, AI scientists were engrossed in ‘deep learning’ – a machine learning method in which hundreds of computers operate within an artificial network modeled on the human nervous system in order to process speech and imagery.

Though the development of deep learning was already a massive turning point for AI researchers, Quoc became absorbed in improving the methodology behind it and found himself developing a more efficient artificial network capable of processing much greater amounts of data with much less human assistance.

The following year, he and his colleagues revealed their project’s results, triggering a deep learning arms race between Google and other tech giants such as Facebook and Microsoft.

He has also been involved in projects centered on recognizing speech in Android and automatically tagging people in images.

After leaving Stanford in 2013, Quoc worked for Google as a central researcher at Google Brain, where he paid much of his attention to machine translation.

In 2016, Google rolled out the AI-based Neural Machine Translation System using his research results and earlier this year the corporation launched the machine learning product Cloud AutoML, which is also based on his ideas.

Tuoi Tre (Youth) had the opportunity to sit down for an interview with Quoc during his recent visit to Vietnam to discuss his work and achievements in the technology sector.

‘Working at Google,’ ‘AI research,’ and ‘speech recognition’ are phrases that may suggest a very intense, stressful job?

Oh no. That is not the case. My work at Google is pretty comfortable and not very stressful. I arrive at work around nine or ten o’clock on weekdays and most of my job involves programming and meeting with other group members to discuss technical matters.

I often leave work at 7:00 pm, but I sometimes work until midnight if a deadline is approaching. The weekend is my time for family, friends, and reading.

Google’s laid-back, creativity-facilitating environment is widely known, but working here can really give you a deeper experience of that environment. There is neither constraint nor pressure.

My team consists of 25 members and we are able to do what we like in an environment free from restrictions and pressure from above.

It’s a typical feature of Google that everything comes from individuals, even ones of the lowest rank, and no limits are imposed by the superior. So there is little worry about the working environment and salary. All of this gives us inspiration to work and the greatest contribution we are expected to make is our creativity.

Why did you choose to work for Google?

But to most scientists who have reached a certain point in their careers, money is no longer a concern. What those scientists care about and need for their scientific research are good partners and an appropriate working environment.

It’s a global tendency now for scientific research to be done in teams, rather than individually. That’s why having a good environment and like-minded colleagues is important. That, at least, is my own personal experience.

It took me four or five years to find success at Stanford. Scientific research takes a long time and entails many more failures than successes. One should have a vision and patience after a project is started.

Most scientific studies end up in failure but investors still pour money into them. Why?? Because if only one percent of the studies are successful, then significant change will still occur.

How did you step into AI research?

I want to share my experience with young people so that they can be successful in their scientific research, as well as in their jobs and life. I think young people should not be scared to really focus on deciding what they like and don’t like. I want to stress that the youth shouldn’t feel hesitant about that.

I’d like to tell my own relevant story. When I was studying at the Australian National University in 2004, I began learning AI. I found it very interesting and wanted to study it in depth. I decided to send an email to a leading AI expert in Australia on the off chance that he would respond. The response came just an hour later and he told me to meet him in person.

After the conversation, that professor gave me an assignment and took me to his AI research group. That’s the email that changed my life.

Therefore, my advice to the youth is not to be afraid of doing what you like. You should send emails to those whose advice you wish to solicit, without worrying about whether or not they will answer. If only one out of ten emails gets a reply, you’ve been successful.

If the person you ask feels your desire to learn, he or she will give you a chance. That’s the lesson I learned for myself. And when you have the chance, work diligently.

Could you tell us about AI and give a conjecture about its prospect in years ahead?

Although AI has a long history, its most significant leaps were made back in 2011 and 2012 thanks to deep learning. The greatest development occurred in image and speech recognition, natural language processing, and AI in game playing.

Leading AI experts have believed since 2012 that deep learning growth would slow down, but the contrary is true. One of the chief reasons is that computer processing speed has continued to increase significantly and more researchers have joined the field. I guess deep learning will keep growing over the next several years.

At present, companies that have found multiple applications for AI and deep learning are typically Internet corporations such as Google and Facebook. But I think within the next few years AI and deep learning will spread to other fields including traffic control, health care and, education.

AI technology will develop by leaps and bounds over the next five or ten years.

Some fear that once highly developed, AI will have adverse implications for human life. When it has transcended technological limits, it may become a social issue. What do you think about this scenario?

I believe AI and deep learning aren’t so dangerous as are perceived in movies. They are actually tools for programming to experts. In the past, programming was done by complicated laws, but now it’s done with handling input and output.

Look at it from this perspective: AI and deep learning are really dangerous when humans use them for dangerous purposes. The situation is no different from that created by inventions of human beings such as fire and electricity.