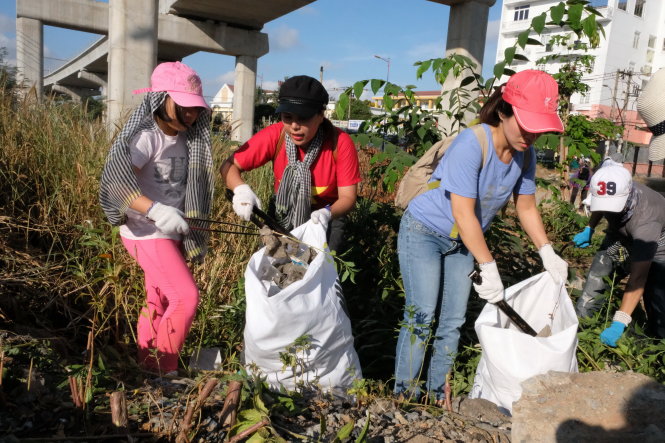 Trashpacking in Vietnam – a growing trend

The term ‘trashpacker’ may not apply easily to the Vietnamese mind, but the trend is growing amongst people with true passion for a clean environment.

His community, known as Trashpackers, is reaching to trash zones around the world.

According to Peter Cornish, administrator of Clean Up Vietnam, a non-profit environmental group, Vietnam is one of the world’s leaders in terms of marine litter.

He thinks that picking up trash in Vietnam has been dominantly triggered by foreigners, but now can be the time when the locals themselves play their part.

They have been active since August 2018.

“Last year, I met Tijmen Sissing, founder of Trashpackers, while traveling to Brunei. He inspired me with his go-and-clean-up trips,” said Yen.

According to Sissing, Southeast Asia is such a lovely place with striking scenery and great cuisine, but trash happens to be everywhere.

“Instead of going on about the problem, he decided to pick up litter wherever he went,” Yen added.

With such inspiration, Giang and Cuc began their trashpacker lives.

One such event happened on a spring morning of 2019.

As early as 7:00 am, Cuc, Giang and a team of more than 50 young members gathered around the Thu Duc Overpass in Thu Duc District, around 15km from the center of Ho Chi Minh City.

There was also a three-year-old girl coming with her mother.

Yen and Cuc have come up with certain strategies to recruit trashpackers.

They first decide on a trash-filled spot, then approach local social media groups and place their call for volunteers.

“It’s impossible for us to clean up the whole planet, but this flame should spread to as many places as possible,” she added.

One of their largest events was done on Vinh Luong Beach in the seaside city of Nha Trang.

They managed to enlist the aid of nearly 300 trashpackers, including high school students, civil servants and foreigners.

The filthy beach was finally renewed after seven days of dawn-till-dust non-stop trashpacking, with hundreds of tons of trash collected.

The first experiences surely put off certain newbies: the stench of trash, the filth of animal carcasses, and the dread of drug syringes and shattered glass.

“But we overcame our fear. What’s worst is the mocking from others,” Yen said.

More often than not, they have been yelled at and labelled as ‘nuts’. Some say these trashpackers mainly show off.

Some even joked that they were going to sell the trash for money.

Yen realized that however hard she tries to bust such misconception, she will still meet with curses.

“Once I was trashpacking under the Thu Thiem Bridge in District 2, there were lots of men enjoying their streetside coffee but none of them bothered to lift a finger and help,” Yen said.

“It was the first time I had ever got so badly scolded.”

Yet, if there were only such downsides, trashpackers like Yen should snap way too soon.

Thanks to this, trashpacking is making its way into people’s mind and more trashpackers get to join the cause.

In the height of this trend, Giang and Cuc decided to cleanse a market channel in Loc Ninh District, Binh Phuoc Province.

“I’d had my eyes on this channel for a long time. You know, it’s in my hometown,” Cuc said.

On this occasion, they recruited dozens of helping hands, but most abandoned the boat when their leaders started to waddle down the mud.

With only Cuc, Yen and a volunteer from Hanoi, they finally purified the channel and left a lovely painting on its wall.

To make for sustainability, trashpackers sometimes turn the trash zones they have conquered into simple children’s playgrounds, with tire swings and stuff.

A good example of this is the Vinh Luong Beach in Nha Trang City.

The children now love their new playground and take an active part in protecting it against littering.

All hands on deck

Several weeks after the heist of social media trashpacking, more similar jobs are being done by young people interested.

This is a huge area with several colleges under the Vietnam National University-Ho Chi Minh City, two dorms with tens of thousands of students, and a great deal of trash.

This first job of theirs was done with merely four members, but now they have recruited up to 25.

They have organized regular trash days for three weeks and have attracted more students.

Environmental groups have placed trashpacking on their agenda as well.

Go Green Vietnam is a pro-environment group in Vinh City, Nghe An Province. They have been trashpacking in the Hung Hoa Dam.

According to Le Minh Tan, founder of Go Green Vietnam, this group has been disseminating videos on marine life pollution.

They have also carried out such campaigns as 30dayschallenge, calling for a whole 30 days of plastic-bag-free shopping in the hope of altering the Vietnamese habit of using plastic bags.