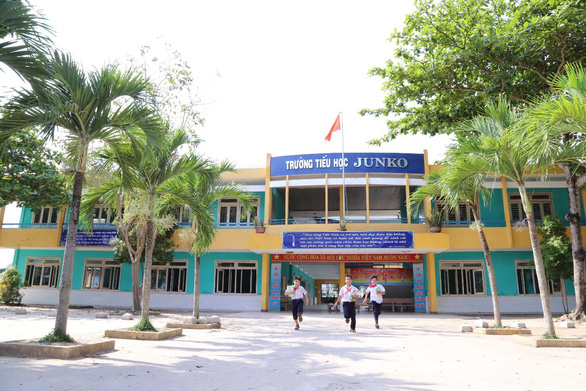 A primary school in the central Vietnam province of Quang Nam was named after a Japanese woman as gratitude for her dream to helping poor children pursue an education.

Tran Cong Truong, the former head master of Junko Elementary School, may be retired, but the memories he’s built over his 20 year career at the school are more than enough to keep him busy.

The school, which opened in the autumn of 1995, changed to “Junko” in 2003 to commemorate Junko Takahashi, a warm-hearted Japanese woman whose dream of helping impoverished children pursue an education has served as inspiration for the entire province.

The story began in 1993 when, Junko, a then-third-year student of Meiji Gakuin University in Japan, visited Vietnam with a friend to enjoy the country’s landscape, learn its culture, and research Japanese investment in the Southeast Asian country.

The two young women were impressed by the beauty of Vietnam and the hospitality of its people after spending a month traveling through the Vietnamese metropolises of Hanoi, Da Nang, and Ho Chi Minh City.

After becoming aware of the lack of educational opportunities for children in low-income Vietnamese families, Junko returned to her hometown in Japan to develop a plan to help poor children get the education they deserved.

“I want to fully support Vietnamese children to grow up healthy and have a chance to pursue their path of study for their own future ahead,” Junko expressed in the thesis she wrote after her trip to Vietnam.

Unfortunately, Junko passed away in an accident later that year at the age of 21, leaving her desires incomplete.

After Junko’s sudden death, her parents decided to pursue her dream of building a school in Vietnam and contacted Professor Ebashi Masahiko, Junko’s research instructor, for help.

Professor Ebashi Masahiko then teamed up with Vietnamese Professor Tran Van Tho, a friend of his who was teaching in Waseda University in Tokyo, to form a network of administrators in Vietnam who could help Junko’s parents.

In the end, everyone agreed to build a primary school in a poor village in Quang Nam, near Da Nang.

The two-story school with eight classrooms, a stadium, and other educational facilities was built with the budget of US$100,000, using the life insurance compensation of Junko’s death and savings the family had accrued for her future wedding.

Junko’s photo has been kept in the school tradition office until today to remind students of her devotion to their education.

Le Quoc Ha, the current head teacher of Junko Elementary School, expressed his gratitude towards Junko and the Junko Youth Volunteer Group, an organization established by Japanese teachers and students to help Vietnamese children, for financially supporting them to complete the school’s infrastructure as well as awarding gifts for students twice a year.

“Junko is gone forever, but she’s left behind a miracle for Vietnamese children in this poor village,” he said.

The Junko Youth Volunteer Group also cooperates with Da Nang University to organize exchange courses for Japanese and Vietnamese students to approach and get to know one another’s culture.

An investigative photo report by Tuoi Tre Newspaper revealed children as young as two have been used to make money for criminal gangs on the street in Long An province, about 60km from Ho Chi Minh City, in southern Vietnam