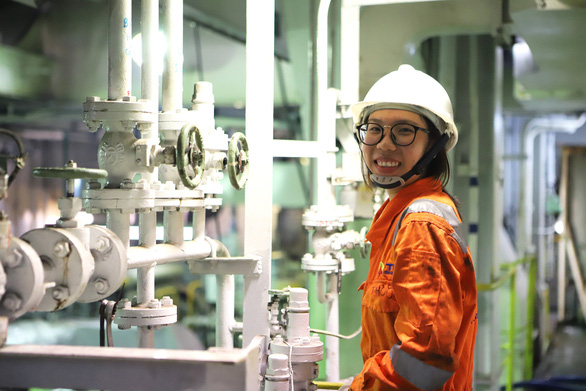 How does a female mechanic work at sea in Vietnam?

In Vietnam, it is extremely rare for a woman to choose to become a mechanic, let alone a mechanic working on an ocean liner, so Hua Nguyen Hoai Thuong’s story catches everyone’s attention.

“Men usually go with each other on ocean voyages, while Thuong is working alone at sea,” Thuong recited old folk poetry to describe her work as a mechanic on an ocean liner traveling around the world.

“When I was a child, I had a boat powered by an AAA battery that was made by my brother.

"He and I often played with the boat in the afternoon in a river behind our house, where I began dreaming of becoming a mechanic in the future."

The only female ship mechanic

Thuong, 23, is currently working for Truong Phat Loc Shipping JSC based in Ho Chi Minh City. She is the only woman who works on the company’s ocean trips.

“There have not been many female ship mechanics, only two so far,” general director Le Minh Dung said, adding that one of them is working on an international liner.

Having a special love for ships during her childhood, Thuong found out she was really interested in the engine room on huge vessels when she studied at the Ho Chi Minh City University of Transport.

Despite understanding that ocean liner voyages can last many months or even a year, she was determined to become a seafarer.

“I feel like being challenged in the engine room operating a ship," said the young female technician.

"I dream of traveling around the world while taking the job as well.”

The woman has taken the duty as a mechanic on a ship for less than a year. Thuong is working on an international voyage these days to transport goods for her company’s business partners.

Every day, she has a morning meeting that usually lasts 30 minutes with other co-workers. The chief engineer will control the meeting while the second engineer will point out the duties for each crew member during the day.

After discussing potential obstacles relating to the duties as well as finding solutions to them, each sailor will try to finish their own work.

Thuong will never forget the happiness of working as an official mechanic on the first day on the ship.

“I have served my internship many times before having a chance to work officially in the position,” shared Thuong.

“I have to learn how to use support tools, how to control the technical equipment in the engine room, and how to fix a problem when it occurs."

Despite taking a lot of training classes before working on a ship, Thuong felt unavoidably nervous.

Thanks to working directly with technical systems and equipment, the young mechanic feels more confident with the passing of time.

“I remember how extremely happy I felt when I could operate the waste burning system on the ship for the first time.

"It was beyond all words."

'It is not arduous work'

Working as a mechanic to Thuong is not a tough duty. In contrast, she feels so proud of herself to live day by day with her passion for contributing to the ship’s safety in voyages.

“I really cannot remember how many enjoyable moments that I have had while working on the ship," Thuong said.

"I am asked to do tasks suitable to my strength and always to be instructed by older co-workers.

“Because of my young age, I am considered as a little sister on the ship by everybody.

"I always get the love from them."

There is a popular myth that scares many women from choosing a career as a sailor. They are told that working on a vessel can cause infertility.

Like many other women, Thuong knows about this before deciding to become a seafarer.

“From my experience, I think that we can be affected badly by the work when we don’t comply with established guidelines,” she said.

“For example, we may fail to wear personal protective suits when exposed to chemicals or any equipment on board.

"You will not run into any health problems if you meet all safety standards."

“Thuong has put a lot of effort into the work," said Anh.

"She is quick in both gaining knowledge and putting it into practice at work.

“She is friendly with everyone and she is working as well as other peer male co-workers."

Thuong intends to study more to become a senior engineer in the future.

She will try her best to achieve this goal, which will be a crucial step that would keep her career growing.

According to Le Minh Dung, female mechanics have difficulty getting a certificate of technical capability from the Vietnamese marine administration despite the job being recognized by the 2019 Labor Code.

Currently, Thuong works as a staff with certificates of basic training issued by the Ho Chi Minh City University of Transport in lifesaving, fire extinguishing, first aid, and safety situations.

She will be able to get an official position on board only when she has a certificate of technical capability.

That is why Thuong has not been added to the list of on-duty staff on the ship.