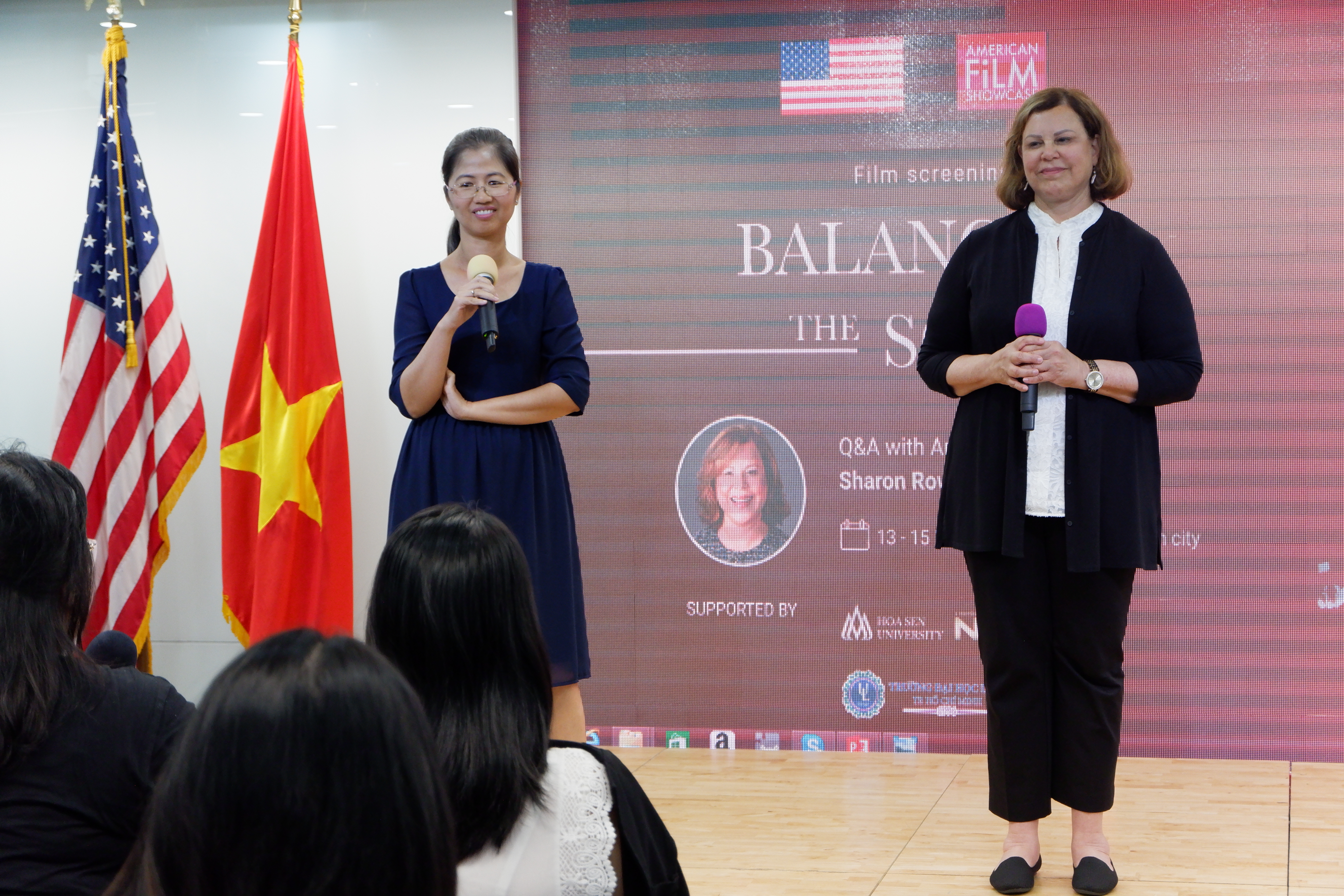 US attorney talks gender equality as her film screened in Vietnam

American attorney and filmmaker Sharon Rowen has sat down for an interview with Tuoi Tre News as her documentary Balancing the Scales was shown to viewers in Vietnam as part of a ‘film diplomacy program’ backed by the U.S. Department of State.

The American Film Showcase program features screenings of U.S. movies and workshops with the participation of American filmmakers in more than 40 countries.

Rowen, a 67-year-old lawyer-turned-filmmaker, had been invited to join the program before it was brought to Hanoi and Ho Chi Minh City on May 10 and 13, respectively, and she decided to introduce her documentary on gender discrimination to the Vietnamese audience.

Balancing the Scales is a culmination of more than 20 years of interviewing women lawyers spanning five generations, from such pioneers as Supreme Court Justice Ruth Ginsburg and prominent civil rights attorney Gloria Allred to young associates and law students, in the quest to expose the challenges facing women in the field of law.

It features both women who have put great energy effort into changing law and culture in the U.S. regarding women and leadership, and younger women who still face the same challenges today.

For example, in the film, a lawyer said that during her time, people thought women going to Harvard was only to find a husband.

Meanwhile, another homosexual lawyer featured in the documentary recounted a story in which her colleague told her that “it's maybe good to be lesbian because people will see you as a man.”

Balancing the Scales also reflects the challenging scales that women have to face in their life.

One is the equality between men and women in employment, and the other is how to balance their career and family.

Rowen said at the screening at Hoa Sen University in Chi Minh City on May 13 that so far all the young lawyers she interviewed had quit working at large law firms when they had children because of the difficulties in balancing personal life and career.

Trailer of the documentary Balancing the Scales

While in Ho Chi Minh City, she had a discussion with Tuoi Tre News on the film as well as her perspective on gender equality in Vietnam and other countries.

The conversation below has been edited for cohesion, clarity, and concision.

Could you please explain why you brought Balancing the Scales to Vietnam?

After accepting the invitation from the American Film Showcase to come here, I started reading about your culture, your laws, where there are challenges in terms of rules, laws, and gender equality. And I was honestly not very surprised to find out that the problems are universal.

What is the most common stereotype about women in Vietnam you got to know before coming here?

I will answer that by saying what somebody who came up and said to me privately after one of the presentations in Hanoi, which was that there is a saying in Vietnam, “if a woman has a PhD, she'll be an old maid.”

I think that's the same kind of stereotype that keeps women from leadership positions in the United States as well, because our cultural stereotypes everywhere expect women to be modest, to keep their head down and work hard.

And when they have a family, they will step back from their career to raise their children and then are not welcomed back into the job market. They're expected to stay at home.

Here in Vietnam I think that there's an additional problem that the family lives with an extended family, and so the woman is also expected not only to take care of the children but also the elderly relatives.

All of those things keep women from being able to fully explore their career. If they have to step back, they will never make it to leadership positions.

So is there any solution, in your opinion, to that?

Well, yes I think! The solution needs to come from three different levels of society, the first one being government policies.

In addition, it’s also about corporations and employers; they should think about how they treat their employees and whether they welcome women as leaders, or whether they tell them things like “you're only going to have children anyway so you know there's no point in my promoting you to this position.”

And then there's a role for individuals to think about what they can do. For example, I made this film to be able to tell people in the United States and around the world some of the things that young women were telling me about the challenges they were facing.

Let's talk about the film. How did you come up with the idea of making it?

I’ve been a lawyer for 40 years, so I was subject to some of the discrimination that I talk about in the film and that younger people are still talking about.

When my daughter was born in 1994, I wanted to be able to explore this because I want her opportunities to be broader than mine. When I graduated from law school, large law firms didn't hire any women.

And I thought that I would start by talking to some of the people that worked very hard before me in the 1950s and 60s to change the laws about equality for women. At that time, I thought my movie was going to be a kind of “hall of fame," meaning the struggle was finished and all what I wanted to do was take the heroines I saw in the legal profession and help them tell their stories.

But in 2009 - which was about 15 years after I started - I found out that young women in the legal profession were still experiencing the same challenges as women from the 1950s to 90s.

I realized that even though the laws were there and people believed that women had attained more equality in the workplace, the statistics, in fact, showed that was not true. Only 20 leaders in the legal field were women and to me those were very depressing statistics.

Then my focus changed in the middle of making the film to the challenges, the cultural stereotypes that exist in the society and keep women from attaining leadership positions, from tens years ago to now.

So during your fight for women in leadership, what is the worst stereotype of women you have seen?

There are a couple of different things going on in the United States right now. One is the sexual harassment and of course you've heard about Me Too and Time's Up, so that is getting some attention.

For 60 years, it didn't get very much attention at all. It was just expected that women would put up with physical harassment and rape. So that part of it is getting a little more notice now.

But the thing that my film is talking about is the mental idea that women are not cut out for leadership positions, which has not gotten enough attention.