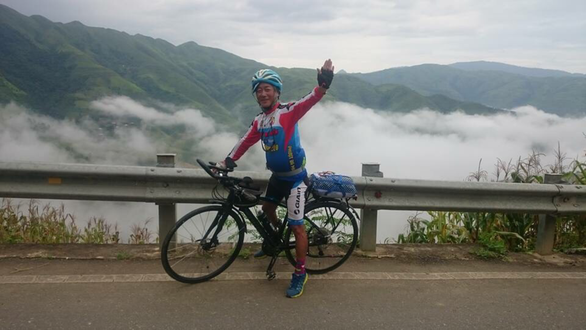 A senior citizen from northern Vietnam has spent the past four years exploring his homeland by bicycle.

Dang Thanh Hai, a 67-year-old from Son La Province, has developed a yearly habit of taking a cycling tour across Vietnam since 2016.

Nearly five decades ago, shortly after finishing high school, Hai enlisted in the army where he spent four years serving his country.

Afterwards, he was admitted to the Hanoi University of Trade and eventually found a job earning a decent income in Son La.

Hai explained that his love of traveling began at a very young age, but financial limitations forced him to focus on other things for most of his life.

“Now that my family has settled down it’s finally time for me to pursue my dream,” said Hai, who now cycles daily with a local cycling club.

For the past ten years, he has been pushing himself to improve his physical condition and in 2016 finally felt ready to take his first long-distance bike tour.

That summer, Hai and members of his cycling club completed a journey from Hanoi to central Vietnam’s city of Da Nang in just six days.

“It was not too bad for my first time and it’s definitely one of the most memorable experiences of my life,” Hai described his first bike tour.

The 67-year-old biker took his first trip across the country at the beginning of 2017, followed by another 15-day tour through Vietnam’s most iconic passes.

“I have never felt this powerful and confident in myself in my entire life,” Hai recalled of traveling through Vietnam’s legendary passes.

Hai completed the 2000-km journey from Ho Chi Minh City to Hanoi earlier this year and he is planning to cycle through every regions of the country in the near future in order to enjoy natural tourist attractions and enrich his knowledge about national culture.

“Nothing is impossible unless you choose not to try your best,” he said.

This story is part of our series on Vietnamese who managed to fulfill their dreams at a late age.

>> Overseas Vietnamese sets up fashion design business in his 60s