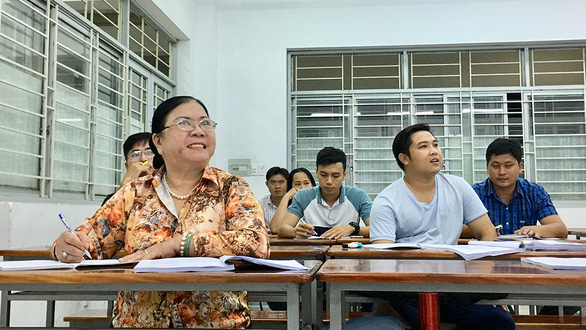 An elderly woman from southern Vietnam decided to continue her study at a famous university in her sixties.

Vi Thi Kien, a 63-year-old grandmother of six children from An Giang Province, is now a second-year law student at Can Tho University, located in the namesake city in the Mekong Delta.

Kien had a great passion for knowledge when she was young, but she later had to give up on her study as well as teaching career due to family hardship during Vietnamese wartime.

As the disastrous war made her homeless, she had to do everything from rice harvesting to running a coffee shop after getting married to earn a living and help her children get the education they deserved, leaving her study path incomplete.

“I used to get first place at school when I was little, so proper education is the least I can do for my children,” Kien said about the determination to send all of her children to school.

Kien began to study in high school programs after her youngest child had got married two years ago, and she finally got herself a spot in the law major at Can Tho University with a lot of effort and determination.

“I have never felt happier throughout my whole life,” she recalled the memorable feelings on the first day going to the university as an official student.

Kien asked for permission to change from full-time to part-time study and moved to stay with her third son, who is now a doctor in a well-known hospital in Can Tho, to manage both her school schedule and other housework.

She also shared that she gained more essential knowledge about law thanks to university courses and considered enrolling in postgraduate programs in the future.

Vo Tan Phat, Kien’s class president, expressed his admiration for his elderly classmate’s hard work, self-discipline and honesty in class during the past two years.

He said that Kien always did her best in all kinds of exams, passed every subject with flying colors and even got the second highest GPA score in their class last school year.

He also shared that his elderly classmate never gave up on anything except for technology due to her age, so she had to count on Phat for every online task.

“Her passion and determination for study have set an example for later generations like us to follow,” Phat said.