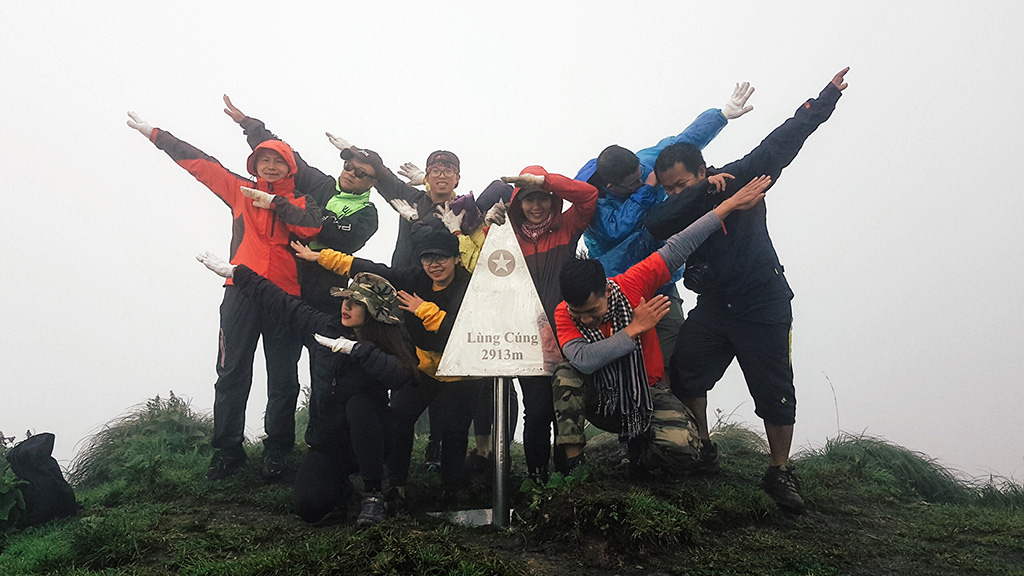 Two Vietnamese women have overcome naysayers and proven their capability in the physically demanding sport of mountain trekking, finding themselves captivated by trips through the wilderness.

Choosing a hobby deemed overwhelming by many, the young women have climbed pinnacles in and out of the country, overcoming their own obstacles and pushing themselves to the limits.

At the age of 27, Truong Ngoc Phuong Nam from Kien Giang Province in the Mekong Delta boasts about her “greatest asset” – conquering six mountaintops in Vietnam and one in Indonesia.

A travel-crazed person from her childhood, she got herself involved in trekking after listening to friends chitchatting about the thrilling sport.

Two years ago marked her first experience with the concept.

“In 2018, I came to Bali [in Indonesia] by myself. It was a week-long trip, and I spent one whole day scaling the most magnificent volcano there, the Batur,” she talked about her maiden climb.

“We set off at 1:00 am from Kuta to make sure we’d be on time for the trek that started at 3:00 am. I basically had zero experience, but I was still a confident member of the team. It was a two-hour trek, and we made it to the top just in time to catch the first glimpse of sunrise.”

Recalling the sensation of her first accomplishment, she remembered “bursting into tears” when she got to the mountaintop.

“I simply went above and beyond my limits.”

The group make plans for trekking trips every year, but at times Nam would also go by herself.

Her circle of friends has expanded after every climb.

The latest conquer was that of the Lao Than Peak in Lao Cai Province in northern Vietnam. She made it within one day with an ethnic porter from the local Hmong community as her sole companion.

As her experience builds up over the years, pinnacles become less of a dreadful thought.

To Nam, trekking is like “green heroin,” which helps her fight back the stress of life and push herself forward.

“I feel much healthier and notice a boost to my stamina and endurance. Enhanced agility and elasticity make me more patient in solving problems and controlling my ego,” she explained.

She remembered one fateful trek when she and her team got ‘trapped’ on the Ta Nang – Phan Dung in Lam Dong Province in the Central Highlands, as bad timing got them stuck when floodwaters came flushing down the slopes.

The team clutched tightly onto each other and fought the gushing water for five hours at a stretch.

They were almost exhausted when they finally made their way out of the jungle.

Describing herself as a daring person, Nam said she has never even thought about giving up this passion, which is, though fascinating, both physically and mentally demanding.

“I love discovering my own limits. Once I’ve beaten one summit, I feel an urge to make another conquer. I’m always on the look for something higher, farther, and rougher,” she said.

“But everything has to be within safety standards."

For the future, she has set her sights on climbing four more summits in Vietnam to complete her list of ten northern pinnacles, after which all her efforts will be channeled into conquering the Everest in September 2020.

She chronicles her every trip on an online blog, inspiring others with her healthy lifestyle and love for nature.

Discussing trekking, Bui Thanh Dung said the sport is not as difficult as it might seem.

“It’s really intriguing. It’s totally not as horrifying as what people often envision from what they see on TV shows,” she explained.

The young lady dabbled her feet in trekking five years ago in a quest to climb the northern mountain of Fansipan – nicknamed ‘the roof of Indochina’ as at 3,147.3m it is the highest mountain in Vietnam, Laos, and Cambodia.

“It’s hard to describe my feelings for the first trek. It was really wearing me down, but I had to keep myself going. I kept saying to myself that I would make it step by step,” she recalled the first journey.

That experience cost her two toenails as she had not had them cut beforehand.

Dung was not always a healthful and optimistic person. Many years ago she led a life similar to that of many Vietnamese youngsters – staying up late, getting up late, taking her health entirely for granted.

“Five years ago I realized that my body was not OK at all. I got digestive problems. I was quick to get tired. I even had high blood lipids,” she said.

“So I stopped snoozing the alarm and started running, going to the gym, practicing yoga, and later on I set trekking as my long-term target.”

Ever since trekking found its way into her life, Dung has felt her body figure becoming more attractive. Her spirits and physique have also been noticeablly enhanced.

To refresh herself, the young woman goes on 3-4 treks every year, both on mountains in Vietnam and abroad. She explained that it helped her find out her true potentialities.

“Choosing a new route and getting all the necessary preparations will take loads of time. I will be away from home too, but that should spice my life up a whole lot,” she added.

“It feels great to blend in with nature and get through paths that are filled with obstacles. Then, every trek will bring about very strong emotions, and I will also have very cool photos."

To her, outward appearance comes from inner health. Exercising is the basis for her daily joy.

Dung has traversed nearly half the height of the 8,126m Nanga Parbat in Pakistan – the world’s 9th tallest mountain – and has overcome Mount Kailash in Tibet at 6,638m.

In her opinion, to go trekking a person needs the ability to withstand the abrupt changes in temperatures, and will have to brave fast-flowing streams as well as bountiful insects.

For mountains above 4,000m trekkers will need oxygen tanks and stamina foods.

Having physical fitness is a must before one should consider any daring attempt, she said.

The enthusiasts are engrossed in farming, industry, and tourism among other fields for a greener Vietnam