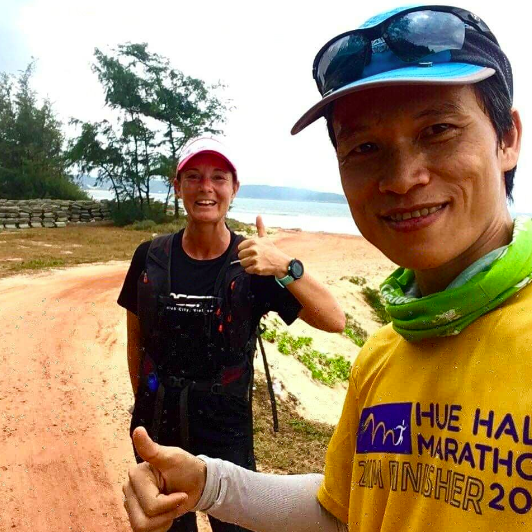 Just after midday on March 19, Naomi Skinner, a 36-year-old international school teacher from England, finally arrived back in her adopted home of the last five years, completing a 2,200-kilometer epic from Hanoi to Ho Chi Minh City.

An incredible effort under any circumstances, Skinner’s final few weeks on the road have not been immune to the current pandemic.

Having continually benefited from the kindness of strangers throughout her journey, she said this was challenged once news of coronavirus spread to the provinces.

“I have found myself fighting a losing battle to find accommodation in the local guest houses that I have used throughout this journey,’ she wrote on her fundraising blog on March 14.

“Sadly, the friendly welcomes I had become accustomed to have long since gone. I am now a source of fear in this country.”

Originally planning two events to mark her arrival and boost awareness of her chosen charities, both have been canceled in the wake of ongoing social gathering restrictions in force throughout Vietnam.

Furthermore, she has been left heartbroken by the fact that her parents will no longer be able to join her and celebrate her milestone.

“Last night [March 13] I found out that my parents will no longer be able to join me on my 5km finish lap of Thao Dien Loop, as Vietnam has stopped entry from many European countries,” Skinner said.

“I understand why, but I am absolutely gutted.

“My dad, who turns 65 on March 25, my official finish date, has been secretly training to run the last 5km with me.

“I am heartbroken that this is no longer going to happen.”

Instead, a now philosophical Skinner has had to settle for an upbeat announcement on her Facebook page, where she proclaimed: “I’ve officially done it! I’ve run from Hanoi to HCMC!! More stats and geeky stuff to follow. First I need a shower and a beer!’

Armed with not much more than one change of clothes, in the backpack she has carried with her on each day’s run, and a fundraising target of £15,000 (US$17,475), the English teacher told Tuoi Tre News recently what it was like to have nearly completed her coastal route and reached her charity goal.

“It’s amazing,” she said over coffee along the Nhieu Loc-Thi Nghe Canal in District 3, Ho Chi Minh City, a brief stop during her final visa-renewal trip to the Cambodian border.

“I was running through the sand dunes of Mui Ne [a popular tourist resort on the country’s southern coast] at the time and it popped up on my app that I’d hit my goal.

“It’s incredible really, and that kind of money, especially here, is going to make such a huge difference to the charities I’m supporting.

Running to make a change

Connected to all five charities through her time working at a well-known international school in Ho Chi Minh City, Skinner spent time with all of them before and during her incredible feat of endurance.

Two of them, Blue Dragon Children’s Foundation and Blossom House, both based in Hanoi, are focused on another issue that made international headlines during her run.

In late October last year, when the story of 39 Vietnamese human-trafficking victims was emerging from Essex in the UK, Skinner was running through Nghe An Province, the area of Vietnam from where the majority of them had come.

“It was strange to be there at that time,” she shared. “But it was clear that the area was suffering. There’s nothing there, and it felt like there was hardly anyone around.”

The three other charities she is supporting are Green Bamboo Shelter, Tien Phuoc Orphanage and Friends for Street Children, which are all based in Ho Chi Minh City and concerned with the education and support of street children and children with disabilities.

On the physical reality of attempting such a huge run, as she had never run more than 15 kilometers in a day prior, Skinner said her biggest fear was not the actual running, but rather the fear of being lonely on the road.

This has been mitigated by friends and supporters along the way, who have joined her on several legs.

Attempting to cover an average of 21 kilometers per day, she began to regularly push past the 30-kilometer mark early on, and found herself ahead of schedule.

However, that confidence took a hit when she had to undergo a period of hospitalization after a large, painful cyst developed on her hip.

In the end, it took her off the road for three weeks and tested her resolve.

“I’d only done about 200k at that point, and then I was out for three weeks,” Skinner said.

“It was frustrating. I thought I’d be able to have the surgery and get back out there in two days, but even walking was hard. I had to keep going back to hospital every day for two weeks to have it treated.”

The thought of quitting never entered her mind though, she says, and she took advantage of the enforced layoff by volunteering with Blue Dragon, once she was able to freely walk around.

“Looking back I’m really glad it happened,” she reflected.

“Being there gave me the chance to learn more about what they do, get to know the children and get involved with some of their projects.

“Blue Dragon is one of the only charities to have successfully prosecuted human-traffickers via the courts here, which is amazing.

“They go in and rescue women who have been taken over the border illegally and sold into sex slavery or forced marriages.”

She also spent time at Blossom House, which she describes as a rehab center for girls whose families have attempted to sell or previously sold their daughters into this kind of situation.

It gives them a place to live, be educated, and recover from such an horrific experience.

Post-her own recovery, Skinner flew back from Hanoi to restart her run from the exact location she had been forced to pause.

Keeping up a consistent pace, she stopped for rest days only when she felt she needed it, and left the run only one more time, to complete a visa-renewal to Laos from Da Nang around Christmas.

“In the end, my longest day was 47 kilometers just south of Phan Rang,” she said, “up and over a mountain range where there were no restaurants, no cafés, nothing.”

Despite recent events, Skinner sang the praises of the hundreds of mostly incredulous Vietnamese who stopped her on the road, offered her food, water and even bus fare during her journey.

Unable to converse fluently in Vietnamese, once she had explained her trip, she says she was constantly humbled by those who took her into their homes without question.

“It’s been my privilege to be able to be in a position to even do this,” she described. “But the reaction from the Vietnamese to me was incredible throughout this adventure.

“The support I’ve had from friends, family and complete strangers has also been unbelievable, and I’m happy to have become an ambassador for these charities.

“Despite the less than ideal finish, I’m glad that I’ve achieved something for myself and raised this money, but even more so I hope that the increased awareness of each charity's work will continue to make an impact a long time into the future.

“Now more than ever, they need our support.”