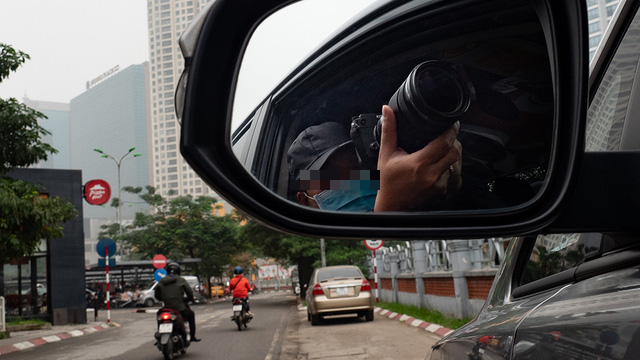 Tuan Anh, who only goes by his pseudonym, has been an active private detective for more than a decade, empowered by the quest for truth and his experience dealing with all types of requests from clients.

Your correspondent had to spend days talking Tuan Anh into giving an anonymous interview.

Anonymity, according to Tuan Anh, is central to his job.

“We are after the truth, but we have to do everything by the book so we won’t break any laws, however lucrative the offer may be,” he said.

A zest for truth

Tuan Anh worked for a well-known detective agency a decade ago, but he quit to set up his own law firm.

Despite leaving the old job, he is still stuck with his so-called 'detective gigs' for which he has such a lust.

Clients who seek his legal service often mention extra investigation and evidence collection, so Tuan Anh added that service to his plethora.

To make for the best results, he browsed his old contacts and sought those competent enough for such ‘investigative’ tasks.

More than a hundred candidates applied over a course of five years, but only a few have lasted in the job.

The majority of his contracts are concerned with civil law, but some are related to criminal law.

His clients are either wealthy or powerful, or both. Sometimes they are willing to pay thousands of U.S. dollars just to keep tabs on their kids, as they want to know what their children do and which friends they hang out with.

Some well-off clients are ready to splash a huge pile of money just to trace a lost object that they hold dear.

On the day of the interview, Tuan Anh carefully instructed your correspondent on his before-and-after attire, for he did not want to draw any attention to CCTV operators.

The interviewer was to put on a jacket and wear large glasses before entering the premises – a newly built apartment block in the Nam Trung Yen Residential Area in Cau Giay District, Hanoi.

Once the interview was done, he was supposed to wear only his shirt, with the jacket and glasses all put in a handbag.

“Love affairs are the easiest of all. Even newbies can deal with these. There are ads about such a service everywhere on the Internet,” Tuan Anh said.

“But being a detective is a different level. It’s more challenging and socially significant.”

From his accounts, Tuan Anh’s detectives once captured a ‘spider-man’ who was stealing things from several villas in a neighborhood or tracked down a drunkard that had stolen a bike and ridden it hundreds of kilometers from Hanoi to Da Nang.

Another story is that of a stunning supermodel who fell head over heels in love with an Internet romance who turned out to be a scam.

This experienced detective further added that in order to check a detective’s credibility, it is enough just to read their ads.

If an agency’s website is full of stuff like triangle love violence, love affairs and the like, their detectives are either very wet behind the ears, or are a complete fake bluffing to make money.

Indeed, tracking down the daily routines of lovers, children, and business counterparts is a rather lucrative task.

On average, a private investigator contract lasts around 7-10 days, with the charge depending on the complexity of the job.

The more input the client provides, the lower the price; and the fewer the clues to start with, the higher the cost.

Generally, one week of investigation can cost VND 7 million (US$300).

Having what it takes

The line between investigation and intrusion of privacy is delicate, he added, as tracing a missing person or a lost object is one thing, but watching a person’s whereabouts, what they do, and who they have sex with is another ball game.

Without proper training and a lack of knowledge of the laws, detectives might as well become criminals.

More than five years ago, Tuan Anh investigated the whereabouts of a tycoon whose wife suspected that he was cheating on her.

Reckoning this was a simple case, Tuan Anh handed it over to his juniors, who produced zero progress after six days of hard work.

They said the entrepreneur went to work normally every day, and his bike was parked in the parking lot for the whole time he was at work.

Studying the case in detail, Tuan Anh decided to step in as he smelled something fishy. He waited until the man had arrived at his office, then phoned his work number.

The operator informed him that the tycoon was on an unexpected business trip.

Tuan Anh concluded from this story that professional detectives should have a quick eye that could see through their subjects in no time.

He laid out a whole stack of binders on the table and said, “Read these. They are all sorts of evidence, images, and video clips. These are just a little part of my years at work.”

“I’ve tried to keep them as evidence of our service. Sometimes clients ask to have all of the original evidence. I couldn’t keep all of them, though, as we had to switch offices several times,” he added.

Tuan Anh then told the story of how he tracked down a much-loved daughter who had run from home for two years.

She came from a wealthy family with an authoritarian father who often yelled at his wife.

Depressed by such domestic problems, the young girl left home so as “not to see their parents in a fight.”

The father did not hold high hopes when he reached out to Tuan Anh and his team. He even suspected that the agency had provided him with a fake address of his daughter.

But when he finally held his daughter in his own arms, it all became clear that Tuan Anh’s team was really good at their job. And so they got an extra tip.

Lucrative as it might be, being a detective is no gold mine as the cost of an investigation can sometimes override how much they get paid according to the contract.

Tuan Anh have sometimes had to terminate contracts due to ethical concerns as well.

These primarily are cases where husbands or wives try to frame their partners into adultery, as that would benefit them in a divorce.