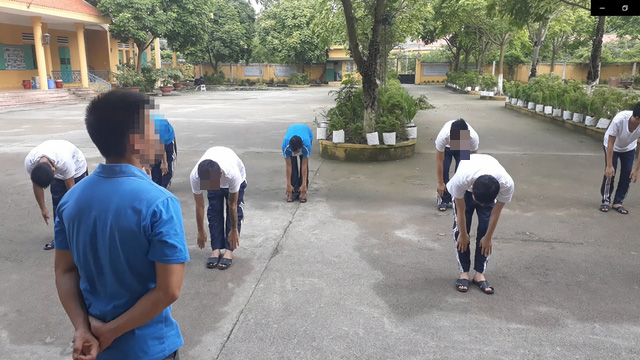 To victims of substance abuse, coming out sober from drug rehabilitation sometimes only means a welcome back to the same life and issues they faced before. Some of them are choosing to stay in rehab centers, advocating abstinence from drugs and providing mental support for new members who are in the darkest times of their lives.

Out of the 700 residents that went through a rehabilitation program at Gia Minh Rehabilitation Center in Vietnam’s northern coastal city of Hai Phong, less than ten are ever offered a spot as a collaborator.

They are picked because of their strong will to steer clear from drugs and commitment to helping other addicts to stay sober.

Once carefully trained, they can act as active agents of the center, mentoring others to stay on the right path.

“As they went through it themselves, no one is better than them in the subject,” said Nguyen Hai Hung, director of Gia Minh Rehabilitation Center.

The cohort of collaborators exert themselves at a variety of tasks on the premises.

From the early morning, N.P.T, a collaborator from the medical team of the Gia Minh center, could be seen instructing the residents to practice health-reinvigorating exercises.

D., another collaborator, was picking vegetables in the garden with another group of residents.

The usually austere atmosphere characteristic to a rehab center is barely felt at this facility.

“This special job feels like teaching a disobedient child. Seeing him learn, grow, and change for the better warms my heart,” T. professed.

T. is on track to be appointed as a new officer in Gia Minh due to his tireless performance on the job, according to Dinh Van Tuan, the center’s medical chief.

“Some people were clean from [methamphetamines] for 20 years but still relapse. It takes just a stint of sadness and indiscipline and you find yourself with ‘the black death’ again,” said collaborator T.N.M.

The passionate mentor was once offered a promotion to an officer position, yet he turned it down as he is, in his own words, “too short-fused for any grand responsibility.”

He occasionally finds himself comforting the forlorn residents struggling with homesickness and the severance from social life.

“Once being here, you need to stay persistent and work your way back to life,” he talks the patients down using his own experience. “Keep it up, think of your children.”

The collaborators at Gia Minh do not simply act as a middleman between residents and management; they also provide the much-needed mental support and guidance for lost souls during their first days in rehab.

The 70-hectare Gia Minh precinct is embraced by the tranquility of greenery. It also shelters those who have gone astray due to narcotics.

T.N.M was once a young aristocrat from an affluent family in the northern province of Bac Ninh.

He got involved with narcotics in his adolescent days.

The revelation of him being HIV-positive was the final nail in the coffin, sending him further down the dark path drugs created for him.

His family put up a front, saying he “is doing vocational training abroad” to conceal his addiction situation.

“What torments me the most is the fact that I can’t confess to my 92-year-old grandfather who is suffering from high blood pressure,” M. said.

He does wish to be able to return, yet he fears the gaze of the neighbors would cause his mother too much misery. Hence, the best resolution for him is to stay at the rehab center.

N.P.T. from Hai Phong City has another story to tell. Drugs drove him to treat his family with negligence.

“I left my wife alone when she went into labor and suffered from postpartum depression,” T. recalled as he nervously intertwined his fingers.

“I fear my absence in my daughter’s childhood would take its toll. How would I cope if she turns out the way I saw women in the drug dens did?”

Collaborator N.M.C from group 2 of the Gia Minh center also has a lot to contemplate about his life. He lost his daughter to drugs, all while contracting HIV himself.

“I was too high on drugs all the time to think straight about anything,” he recalled. “When withdrawal symptoms kicked in, I would beg my family for money, or else I would attempt to steal and eventually go to jail.”

‘Once you gain confidence, you gain freedom’

One can easily spot a peculiar attribute of the Gia Minh rehab center from the first sight: there is no cordon built around the premise.

As the greeting banner at the entrance goes, 'Welcome, new friend!,' Gia Minh strives to treat its residents with respect and compassion to build up their agencies rather than handle them as patients.

“I always tell the residents that once you gain confidence, you gain freedom,” Nguyen Hai Hung said.

Collaborators in the center for the most part are individuals who are not fully ready to reintegrate with society as they fear being pulled back in the old ways, yet some truly swear to help other addicts become clean.

Once struggling with HIV, M. used to protest the rehab program by picking fights with other residents. He now uses that experience to help those who are stumbling through treatment.

“I remember vividly the words that Tam — the center’s vice-director — gave me: even a handful of soil or a tuft of grass has its own value. People do too, you just need to learn how to live a life with meaning.”

C. also found himself in conflict over the first days at Gia Minh until he received guidance from vice-director Bang Tam, who is a psychologist.

“I started eating a plant-based [diet] and practiced meditation as a spiritual treatment.”

He now feels much better and is devoting himself to a full-time plant-based diet.

He has used his experience to help temper the anger issues of other addicts getting through difficult times.

N.P.T. appears to be the most confident out of the collaborators.

“I am currently not getting paid, yet I choose to stay since I don’t want to lose self-control and slip from the light to the darkness once again,” T. burst out laughing as he talks.

But T. also has another motto to uphold, “Let’s help one person, then one more, and one more.”