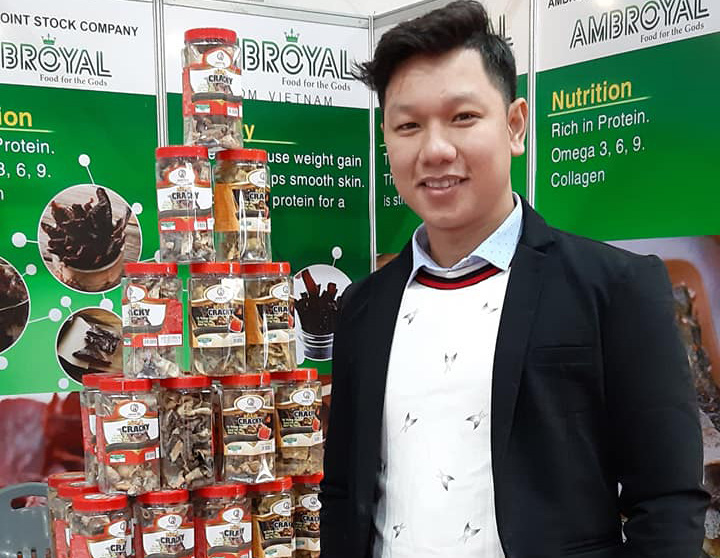 The man stood his ground firmly as his family members fiercely rejected his plans to leave the school for a risky business plan.

Now his buffalo jerky and fish skin snacks are found in supermarkets and convenience stores all over Vietnam and possibly in other Asian countries in the years to come.

Hoang has won prestigious awards for charity work as a business entrepreneur.

The zeal for business

“Being a teacher is a highly respected and meaningful job, but I like to push the limits,” he said.

After meticulously weighing the pros and cons of such a career move, he bravely entered the business world.

From his accounts, buffalo jerky was his favorite choice as a souvenir to bring back after every trip he made to his home during his years working as a teacher.

Buffalo jerky is the specialty of Tan Hong District in Dong Thap Province, located in the Mekong Delta, where he worked.

“This is one of the three most renowned lands for buffalo jerky in southern Vietnam. The other two are in Bac Lieu and Soc Trang,” he said, referring to the two Mekong Delta provinces.

The man emphasized that utilizing resources from his own hometown in business will benefit his fellow countrymen.

Yet, he did not have any intention of mass producing buffalo jerky at that time. The idea only crossed his mind after he asked for a transfer from Tan Hong District to Sa Dec City, as it was closer to his home.

When he started making buffalo jerky, his goal was a better income, and he stuck to the traditional way of processing beef jerky: after seasoning the jerky is dried in direct sunshine.

Seeing that his products were becoming popular as holiday gifts, Hoang quit his teaching career and focused solely on his business.

Without a background in the business sector, the former teacher signed up for business administration courses in his province. Gradually he built his image, found partners, and commercialized his products.

The man was determined to go ‘large scale,’ so he equipped himself with food dehydrators and vacuum sealers.

“Modern machinery extends the expiration date of buffalo jerky. Jerky done the manual way is prone to fungi,” he said.

He advertised his products at large and small trade fairs. In pursuit of more consumers, he targeted supermarkets and convenience stores.

Initially, he failed as consumers were accustomed to beef jerky and squid jerky. They simply were not sure about buffalo jerky.

According to Hoang, his products could not distinguish themselves from the other players' already established in the market.

Besides acquainting himself with procurement managers, he conducted research into imported products similar to his.

With modifications to flavor, quality, and packaging, Hoang’s buffalo jerky finally made it onto the shelves.

Using this success, Hoang went on to attend trade fairs on foods and drinks in countries like South Korea and Singapore. He found big partners and now his buffalo jerky has found a market.

Dong Thap Province is also known for its abundant supply of catfish. Aware that fish skin snacks from Singapore, which are made using catfish, are quite popular with Vietnamese eaters, Hoang targeted this product as his next venture.

His sources of catfish skin came from Co May Company, but the first steps were met with immediate failures.

As the fish skin contained a large amount of gelatin, he could not produce snacks that were crispy like the Singaporean products.

The man racked his brain.

“It was really hard. My snacks are way different from the imported type,” he said.

After hundreds of failed attempts, the businessman finally got his hands on fish skin snacks that were similar to the ones from Singapore.

He modified the flavor to suit Vietnamese tastes and his products were welcomed at Big C supermarkets, Satra supermarkets and 7 Eleven convenience stores.

His snacks won second prize at a business idea competition for Vietnamese in 2019 in his hometown while he received provincial funding for his business plan.

He was also one of the 34 individuals who were presented with the honorable Luong Dinh Cua Awards for entrepreneurs working in agriculture, aquaculture, forestry, and salt production who benefit the community.

His idea made the top five potential projects to be sponsored for development.

“In the coming time, I plan to launch fast-food carts that offer fish skin snacks on their menus,” Hoang said.

“This should help to popularize my products, and I will try to have them exported to international markets.”