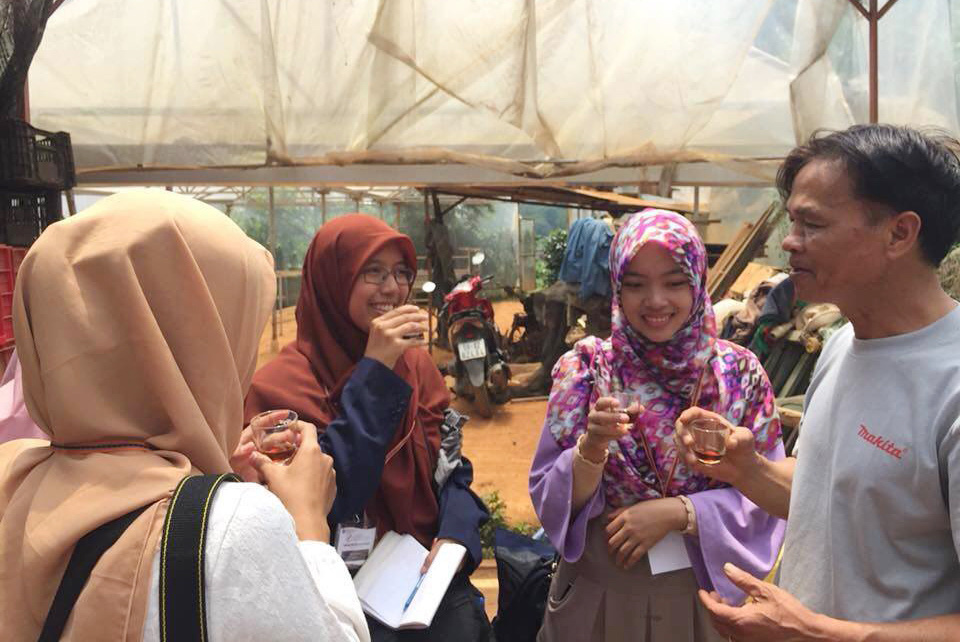 A coffee planter in Da Lat City in the Central Highlands region of Vietnam who has found unexpected success by adopting an organic approach to cultivating his quality coffee varieties now shares his secrets in hopes that more young people will take the same path to growing specialty beans.

Nguyen Van Son, 58, is proud to have coffee aficionados from all over the world drop by his plantation on field trips and friendly tours.

Son’s coffee beans are of the highest grade, surprising even the judges from the Specialty Coffee Association (SCA), a nonprofit organization that represents thousands of coffee professionals across the globe.

They did not expect such quality beans from a plantation in Vietnam.

Son’s choice of coffee as a lucrative business was not planned.

Twenty years ago, he was a motorbike parts store owner who planted around 2,000 orchids in his own garden as a hobby.

Needing money to pay the two gardeners he hired, Son decided to grow some coffee plants as a way to make an extra earning.

The gardeners had no experience taking care of coffee beans, so it was by mere accident that Son’s plantation was treated in a ‘natural’ way using only the organic materials they could get their hands on.

In 2010, a coffee company's executives from Da Lat dropped by his plantation and took his beans for a quality control test.

The test results showed that they were Pacamara beans, a world-renowned yet basically extinct variety of coffee grown mostly in El Salvador, a country in Central America.

In doubt, SCA judges came all the way to Son’s farm for an on-site examination.

“That was in 2011. Ever since, foreign experts have come here once or twice a year,” he said.

The SCA coffee assessors strongly suggested Son adopt an organic plantation model. They also instructed him on how to harvest, ferment, and roast the beans.

To Son’s amazement, the plants he seemed to have neglected were the ones most highly regarded by the experts.

They remarked that the plants that were not well fertilized and seemingly unattended were also the better specimens on the plantation.

Son found it strange that these judges preferred coffee so different from his favored taste.

While Son enjoyed coffee that was dark, dense, and bitter, the foreign experts’ definition of good coffee did not have anything black or dense about it.

“What is meant by ‘good’?” Son wondered.

“I realized that ‘good’ depends on each person, but the quality of coffee has to adhere to the SCA, with their very clear criteria and scoring system. It’s indisputable.”

He took the experts’ advice and became hugely successful.

Currently, the man produces coffee roast from his beans, setting his product’s price at VND400,000 ($17.32) per kilogram, while other similar products from Da Lat were on sale at much lower rates.

Son made a Facebook business page and named it ‘No Secret, Only Passion.’ Here he posts his insights into the coffee manufacturing process, with input from other coffee farm owners and their experience.

Coffee quality is determined largely — up to 70 percent — by the cultivation itself; 20 percent comes from the roasting process; and the last 10 percent depends on the barista, he said.

He sends his best candidates to the SCA for examination. Based on their feedback, the Vietnamese farmer improves the taste of his products.

He has added an extra flowery, fruity, and herbal flavor to his coffee roast.

His practice seems to go against the flow, as he raises other plants as a way to keep up his coffee quality.

Persimmons, bananas, herbs, and mint are cultivated as a source of nutrition for his coffee farm.

“It takes 20 metric tons of coffee produce to meet customers’ demand, but even after years I have only managed to find ten small plantation owners to join my project,” he said.

“It is a bold move to switch to clean specialty coffee. Arabica beans, for example, can only grow from an altitude of 1,500m and over, and within the coffee belt [latitude]."

For a brand new plantation, it could take a minimum of ten non-profit years.

However, even a farm with proper soil conditions could only yield revenue after at least five years of financial struggle.

Only the cherries, the red ripe beans, will be harvested.

For average coffee, only four gatherers are needed, working for a month with a less selective approach where all kinds of beans, red and green, are collected.

In particular, Son’s coffee goes through ten post-harvest stages of refinery. He likens this to a beauty pageant.

No secret, only passion

According to Son, he used to run into a shortage of gatherers during peak coffee harvest seasons.

That problem solved itself after he publicly shared his deep understanding of coffee planting practices.

Over 500 volunteers wrote to him, offering to pick coffee beans at his farm.

In exchange, they would get complete access to his knowledge on growing coffee plants, from daily care to refined products.

Son is happy to reveal his secrets, hoping it will inspire young Vietnamese farmers to keep up with the specialty coffee business.