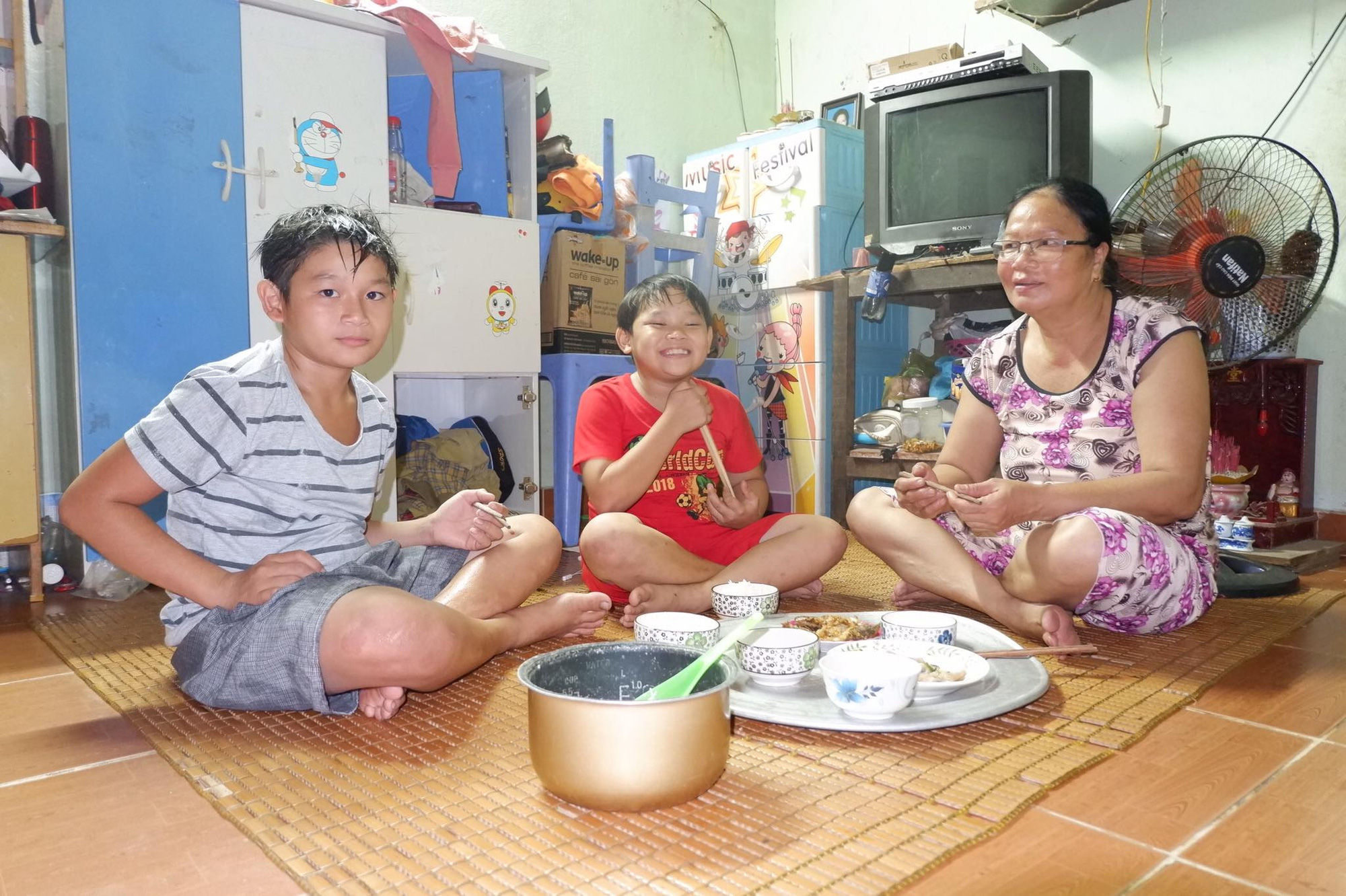 Despite immense hardship, a woman in her fifties from the Mekong Delta province of Tien Giang has fended for two orphaned children as if they were her own for more than a decade, while struggling to give them a chance at a better life.

Ho Thi Ngoc, 53, has shown her two adoptive teenage sons love to overcome the troubles of an impoverished life for the past 12 years.

The little money she does earn from her odd jobs goes directly to supporting the two boys, aged 15 and 13, who have been staying with her before they learned to walk.

The ninth of 14 siblings, Ngoc was forced to quit her studies in second grade and helped support her family with menial work, including herding cattle and ferrying passengers by boat.

After the settlement was relocated, her family moved to a rented room nearby, eking out a modest living through odd jobs around town.

One of her neighbors was a young couple who moved to the metropolis as they could not make ends meet in their rural hometown in the northern province of Phu Tho.

The couple gave birth to their first son, Luong Phuoc Dat, or Ti, in 2005.

Their dream for a better future was shattered when the wife died of heart disease aggravated by the birth of their second son, Luong Dat Phat, or Bin, in March 2007.

Just three days after his wife’s funeral, the father left his two baby boys behind and never returned.

Early one morning, Ngoc and others rushed to break into the locked tenement after hearing the boys’ cries from the family’s rented room.

“With their father gone, the older boy wouldn’t stop crying. His baby brother, who was less than one month old then, passed out and couldn’t cry until my mom fed him some milk,” Ngoc recalled in tears.

After reporting the case to local authorities, the kind-hearted woman, who was single and worked at an eatery to support her mother, found herself caring for the boys.

Upon her mother’s death three years later, Ngoc continued to fend for her two adopted sons all by herself.

Even though her affection for the boys grew significantly, she kept reminding herself that she would hand them over to their biological father if he ever returned to take them home.

“I don’t need praise from the public nor mind scornful remarks that the adopted sons will leave me when they grow up. They are my sons. My days are packed with joys as the first thing I see every morning is my boys sleeping soundly,” Ngoc said.

The middle-aged woman has had her plate full working from dawn till dusk to put food on the table and provide for her boys, meaning she did not even think about getting married.

Well aware of the difficult road that lay ahead of them, Ngoc was determined that her sons were given the opportunity for a proper education and a stable future to turn their lives around.

Thanks to her employer’s help, she managed to send the boys to school.

Ngoc and her boys then left for Long An Province, approximately 45 kilometers west of Ho Chi Minh City, where the school her sons would attend is located.

Eventually, despite her objections, Dat, the elder son, decided to drop out of school after finishing sixth grade to help her earn a living.

Dat peddled lottery tickets for two months before landing a job at a life vest factory with a stable salary to help his mother support his younger brother, who was in fourth grade.

Ngoc had never concealed the fact that the two boys are her adopted sons, which they had always taken as a joke until this March, when she gave them an ID photo of their blood mother, her only keepsake from their past.

“They are old enough now to know the truth. In case something goes wrong with me, they would at least have some clues to search for their biological father,” Ngoc explained, adding the only thing she remembered about the man was his surname.

They learned the truth at around the same time that Vietnam was dealing with the impacts of the COVID-19 pandemic; Ngoc was temporarily laid off from a packaging factory and Dat’s work had been suspended.

There were days when the trio got by with only some boiled veggies.

Dat asked his employer to pay him a small sum in advance which he used to print a large photo of their blood mother to put on a makeshift altar with food for the death anniversary of their mother, who defied her doctor’s warnings that she might die during child delivery to give birth to his brother 12 years ago.

“I don’t really want anything, except work that earns me money to support my mom and brother,” Dat said, adding he dreamed of becoming a driver, and there would be five years ahead before he could obtain a driver’s license.