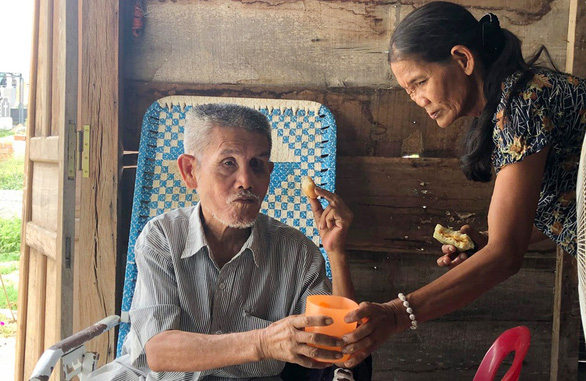 An elderly man and wife have managed to get on with their lives despite poverty and visual disability in Vietnam.

After three decades of marriage life, they still give each other their dearest affection.

Hoi is the nickname of 69-year-old Nguyen Huu Thai, a blind man living with his 62-year-old wife, Lan, in a makeshift home next to a cemetery.

As your correspondent entered the old couple’s ramshackle cottage, the man called to his wife with sweet words, “Darling, why don’t you get our guest some tea?”

Sitting down in the so-called house with nothing of value inside, Hoi slowly told the story of his star-crossed life.

From his accounts, he got hit by a bomb shard in 1974, when the country was being torn by war.

His life was saved, but the two eyes were forever dysfunctional. Even the left eyeball was lost, leaving his face with one deep socket.

At 23 years old at the time of the accident, Hoi managed to grope his way to Hue City in central Vietnam.

Here he worked as a street beggar and was ready for life full of hardship ahead.

In 1990, Hoi met the love of his life, who was then a beggar like he was. Their paths crossed at Dong Ba Market in Hue.

Lan was visually impaired due to mistreatment of her optical problems in early life. Only one of her eyes works, but with a blurred vision.

“I took pity on him. I couldn’t just leave an old man like that wandering around alone,” said the wife.

“I decided to marry him, whatever hardships might await us. I was willing to accept it all.”

She said that she had not regretted this choice even once.

The hard-working wife and mother

When their first-born daughter came about, the family moved back through a 612km journey to Cam Ranh City in Khanh Hoa Province, where they continued their beggars’ life.

In 1995, they moved to a relative’s house in Ninh Thuan Province, which was located around 100km to the south. Here Lan gave birth to two other children.

Later on, they decided to settle down temporarily next to a local cemetery in Ninh Son District, Ninh Thuan Province.

Lan switched from begging around to running all kinds of errands just to make ends meet for their whole family.

Years went by and her barely working eye faltered, but she still managed to pick enough vegetables for sale at the local market every morning.

In the afternoon, the old woman made her modest income from helping people carry their water supplies to designated locations.

“Poor her. She has to do everything by herself. I can’t help because I’m blind,” Hoi said.

“I love her. Every day she would bring home some keo [a fruit similar to tamarind] and we’ll crack them out together. They sell for VND50,000 [US$2] per kilogram.”

They said that their children do not support them a great deal as they have their own poor lives to deal with.

“My eldest daughter is married to a man in the neighboring village. My middle child is now a manual laborer in Saigon [the old name of Ho Chi Minh City], and my youngest son lives with us,” Lan said.

“Sometimes they drop by and give us a few hundred thousand dong [around $20].”

The couple are weakening as they age. Lan now stays close to home, picking keo fruits and cleaning tombs for a living.

After Hoi experienced a fit in the middle of the night one day, his wife has not dared to be away for too long.

They receive a monthly government grant of VND540,000 ($23), as well as support from certain benefactors.

Love blossoms in the graveyard

These words might equal ‘darling’ in the English language.

Though such addresses are fairly common amongst young Vietnamese people, they might not be popularly heard between elderly married couples.

Hoi said that many people admire their lasting love when they see the two strolling along the street hand in hand.

“They say that she is a perfect woman. She agreed to marry such a handicapped person like me, and even takes care of the whole family without any single complaint,” said Hoi.

Their love for each other can also be seen in the little food they share every day.

“Every time we get some foods from others, he insists that I have a bite first. If I don’t eat, then he won’t,” Lan said.

People living in Hanh Tri Village have gotten used to the image of an elderly couple going for a slow walk around the quiet cemetery under the scorching heat of the late afternoon sun.

They might simply go for a relaxing walk, or to their parochial Catholic church.

Or she might take him to her tomb-cleaning work hours. The man will sit waiting on the bench while his wife does the job.

“It feels so sad to be home all the time. I think now that we live with ‘them’ [dead people], we can do something for them, then they will bless us from above,” Lan said.

Recently there has been an announcement that the piece of land on which they have built their make-do cottage will be taken back for use as graveyard ground.

This has made them really worried.

Now Hoi and Lan hope to get back to their hometown, as it has been 30 years since they moved away.