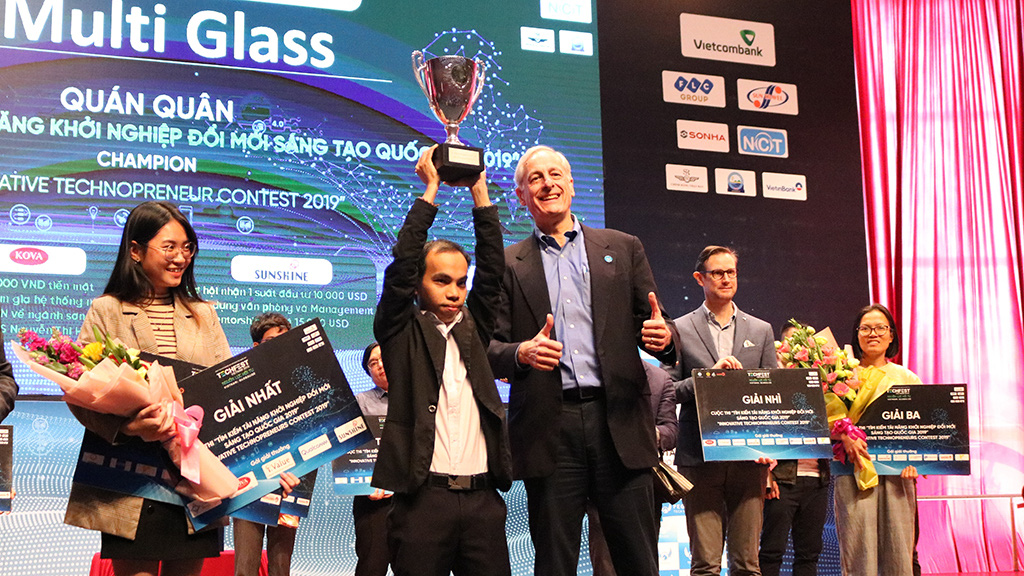 Le Hoang Anh, whose award-winning smart glasses are intended to help the visually impaired use the computer and alert long-distance drivers if they start to nod off, sets his heart on running a thriving business making socially impactful tech-based healthcare devices.

As the 30-year-old founder and CEO of Da Nang-based Multi Vietnam Joint Stock Company, specializing in manufacturing technological devices that make use of Artificial Intelligence (AI) and the Internet of Things (IoT), Anh aims to become a market leader.

His company’s invention, MultiGlass, has nabbed several local and international prizes for its innovative functions and positive social impacts.

Anh’s product lines comprise MultiGlass Care, which applies AI to alert and protect the user’s eyes from harm due to proximity to smartphones and tablets and benefit the visually impaired by assisting them in using the computer.

Once the system detects a high risk of the driver being drowsy, the driver is alerted via an audible signal emitted from a horn attached to the spectacles’ rims and arms.

Students may also find the smart glasses useful in keeping them awake for exam preparation.

The young man’s path to success was never certain.

Although winning national and international prizes in computer science and science had earned him a spot at the University of Science and Education under the University of Da Nang as an information technology major, Anh decided to break loose from his studies and develop a personal vision and sense of purpose.

After earning a living by writing software for companies based in Ho Chi Minh City and Da Nang for four years, he retook the entrance exam into the very university he had deferred his studies from in 2011.

It was in the same year that the young man and his partners launched an educational startup that produces software designed to help preschoolers learn math and English.

Despite the project in its infancy, Anh and his group managed to scrape out over VND1 billion (US$43,000) raised from an investor.

After three years, Anh sold the profit-making business and embarked on his new startup project, MultiGlass.

“Looking back now, my decision to put my education on hold to seek out a new environment where non-traditional opportunities for self-improvement and experience in the hi-tech sector abound is a risky one indeed,” Anh shared.

Like most other startups, Anh’s journey to get his business off the ground was not without challenges.

“One of the major hurdles in our early days was the lack of funding, technical counseling, and support and orientation on how to run our business. Instead of staying down in the dumps, I just gave it my best shot,” Anh recalled.

Anh’s invention has pocketed several prizes at local and international startup competitions, which he considers excellent opportunities to promote his projects and call for local and foreign investment.

His intuition has been correct so far with his inventions being named winners at TECHFEST 2019 — the biggest annual event organized by the Vietnamese Ministry of Science and Technology for the innovative startup community in Vietnam; champions at a startup competition organized by Total Group in 2019; and among the Top 40 Innovative Startups in the 2019 ASEAN-Korea Startup Week.

His most recent recognition came when the gadget won ‘Tech for Good,’ one of the nine categories at the iMap Choice 2020, an initiative within the framework of a project for promoting entrepreneurship and social creativity, which was jointly launched by the Hanoi-based National Economics University and Ireland’s Trinity College Dublin with the sponsorship of the Irish Embassy in Vietnam.

The product also made its way to the Startup World Cup Grand Finale 2020, which recently took place in San Francisco, California.

The aspiring inventor is hopeful of MultiGlass’s extended applications in the healthcare sector including the detection of eye diseases and guiding services for the visually impaired.

His group is also working to develop new functions and promote the gadget to European markets while seeking out new partnerships and forging links with foreign investment funds.