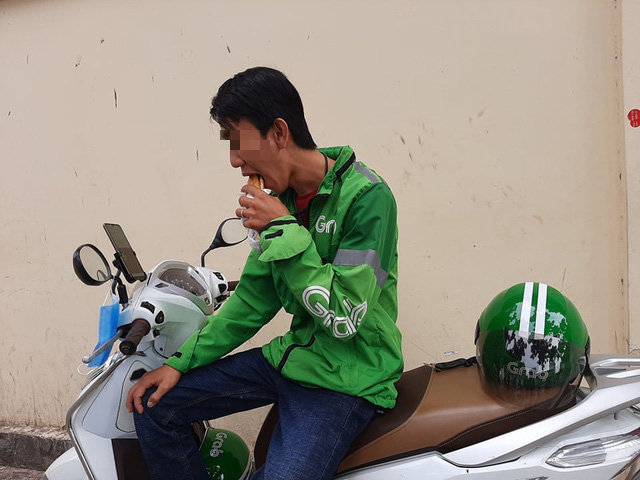 Incentivized by attractive offers and a low barrier to entry, 'shippers' — the localized term for motorbike delivery workers in Vietnam — are flocking to work for food delivery apps.

Over the danger of unemployment, these workers would rather face the risks involved with their job any day.

The shippers’ presence can be felt immediately in urban areas such as Ho Chi Minh City, where public landscapes are adorned with motorbike riders in brightly-colored uniforms that represent the brand they are working for.

Viet Tam, a 28-year-old shipper from Binh Thanh District of Ho Chi Minh City, is still visibly upset talking about an incident that happened a month ago.

As stipulated by the delivery procedure, Tam needed to pay the full price for the order at the bakery’s end before collecting it — with a delivery fee added — from the customer.

The customer, who did confirm his order via phone call prior to the delivery, vanished without a trace when Tam reached out to him to deliver the cakes.

It took him three days of petitioning and a pile of paperwork to retrieve the amount of money he deposited for that order from his employer.

“Anyone in this 'shipper' business will face these situations at least once. I was lucky to get my money back, but other shippers have had to bear the brunt, [for example] drinking five cups of boba tea or eating two servings of family-sized hotpot [that no-show customers left them with]. It's rather saddening."

Thanh Vinh, a 19-year-old meal delivery worker spotted standing in District 10 of Ho Chi Minh City as he waited for a new order, has also had his share of hassles with the job.

Seeing a new order of noodle soup, he mumbled in dismay, “Noodle soup again. Please don’t turn out like the last one.”

By “the last one,” he meant the customer who ordered three bowls of beef noodle soup to an apartment building in District 7.

Upon arrival, he discovered that the address was the home of a popular male singer.

“He said he did not order anything, then asked me to verify again with the person who had placed the order. It turned out that person was a fan who tried to send food to their idol, but somehow let him pay for it,” Vinh said.

“It’s a common situation these days. People with too much time on their hands try to place orders to the address of their favorite celebrity. Yet these idols won’t pay [for the items], leaving the shippers with the consequences."

According to Vinh, that was just one of the antics that he has had to endure at work.

“One time I was rushing to the food stall after taking an order, but the long queue of customers left me waiting for my turn for a while. As the customers frantically checked on their order, I had to make haste nearly ten kilometers for a timely delivery. Yet when I arrived, they rejected the order, saying the noodles were soggy at this point and refused to pay,” Vinh recounted.

“Another one was when I delivered a serving of hotpot to a family in District 10. They were having a row and decided to take it out on the shipper by rejecting their ordered item. I was driven to the verge of tears at that point."

Shippers work in various categories, with food delivery being the most popular at the moment — alongside tech-based parcel delivery, independent shipping, and store-employed shipping.

Diverse as the business is, it is evident that barely any category can exempt their workers from encounters with horrifying customers.

Huu Tai, 35, who works as a shipper for a delivery service provider, recounted the experience he had with a grumpy customer.

"Once, I arrived at the delivery destination at 10:00 am and told the customer by phone to come out and receive their parcel, only to be scolded by them for the sake of ruining their sleep,” Tai said.

“Taking their sleep as an excuse, they refused to receive the package despite being at home at the time. It took me a few days to finally deliver their order to them."

Saving grace in a tough time

Facing the grueling hustle of the job on a daily basis, the majority of shippers are still clinging to food delivery. Enduring customers’ rage is a way out of the current state of struggle for them.

The first wave of COVID-19 outbreaks in Vietnam back in March drove a large score of industrial workers to unemployment. Le Tan, a 26-year-old hailing from the Mekong Delta province of Bac Lieu, was one of them.

Three months ago, he was laid off from his job at a garment factory in Thu Duc District of Ho Chi Minh City. To make ends meet, he switched to delivering food for the app-based platform Grab.

“It is indeed arduous being exposed to weather, plus enduring the reproach from customers every day. Nevertheless, the pay is higher than what I used to earn as a factory worker,” Tan said.

He is by no means an isolated case: a fraction of delivery service workers at the moment are fresh arrivals from industrial sectors.

In a rough calculation, if each delivery requires a trip of five kilometers, the shipper receives VND20,000 ($0.86) for a run after deducting an operational fee of 20 percent for the platform owner.

“Let’s say I exert myself enough to reach 15-20 orders per day, I would make around VND400,000, which suffices to cover grocery bills for my wife and milk for my kids,” said Quoc Bao, a 32-year-old in Binh Thanh District.

He is working as a shipper after being let go from an electronics manufacturing job in District 9.

Tuan Huu, aged 30, is a father of two kids aged four and eight. His wife used to work in an industrial plant, but has recently switched to being a full-time homemaker.

“Working as a shipper is not easy. Running around regardless of the time of the day, not to mention the fussy customers, who feel the need to scold others and cancel orders as they please,” he said.

“However, as long as you can endure and put in the work, it will make you money. Frankly speaking, I make enough to cover my rent and put food on the table for my family,” Huu proudly explained only moments before he resumed driving to survive in the city.