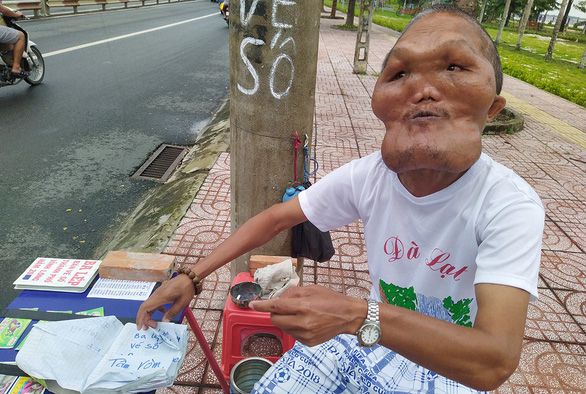 Le Huu Hien always keeps a smile on his face and helps those who are less fortunate than him even though he often finds himself on the receiving end of inquisitive or condescending stares on the streets, as he peddles lottery tickets for a living in Vinh Long Province in the Mekong Delta of Vietnam.

The 44-year-old, who lives with his elderly father and stepmother in an alley in Vinh Long City, the province’s capital, has a speech impairment in addition to his facial disfigurement and many health issues, which has led people to give him the nickname 'Ba Lep.'

Because of his facial deformity and speech impairment, Hien often finds that many people do not want to talk to him, especially young children who are put off by his appearance.

“Only birds feel comfortable in my presence,” Hien said with some effort.

According to the owner of a food stall nearby, rain or shine, the man feeds sparrows with uncooked rice while sitting outside.

He also ventured out with a mask on during the novel coronavirus (COVID-19) outbreaks that began in late February to make sure the flocks had a full stomach as shops and restaurants shut down, and no public gatherings meant no leftovers for them to scavenge on.

For such a gentle, loving man, life is a constant fight against what he sees as social stigma on how different he looks from others.

Hien was born healthy to a war veteran and a woman in 1976. The first indication something might be wrong with him was that he took a while longer than his peers before he started uttering his first words and toddling around.

When the boy turned five, his parents noticed that something was definitely wrong as his head began to bulge in size and he started to have occasional severe fevers.

Hien’s father, Le Van Vui, was not really sure what was happening and was too poor to seek help from any pediatric hospitals, the only thing he could do for his boy was take him to a local physician who gave a few shots to relieve his fevers.

As Hien’s head and chin grew abnormally large, his circle of friends began to shrink. The boy became withdrawn and confined to his home to avoid stares, harassment, and the rude names people would call him.

The misfortune of his childhood continued as his own mother soon left, so the disabled boy only had his father to rely on.

His father worked as a xe dap om (bicycle taxi) driver along with odd jobs around town to put food on the table and send Hien to school.

The boy’s joy of going to school was short-lived as his father was soon told that parents of other students complained to the teacher that their kids, spooked off by Hien’s severely disfigured face, could not concentrate on their studies.

Despite his passion for learning, Hien decided to quit school to avoid becoming a burden on others. He would wind up spending the majority of his childhood alone in a room, lonely and deprived of friends.

When Hien’s father was about to remarry, his bride-to-be agreed to live with him only if he put his boy, then 12, into his biological mother’s custody.

The woman was later reluctant to live under the same roof with Hien because of pressure from her own family.

“When I first moved in with my present husband and Hien, I would always avoid being in the same place with Hien,” admitted Hien’s stepmother, who wished to be anonymous.

The woman soon realized she should not have judged a book by its cover.

“After a while, Hien began to melt my scares away. He’s so kind and obedient, so my sympathy and love for him grew since,” she noted.

Vui, Hien’s father, revealed his son’s disfiguring condition might be caused by Agent Orange, a chemical weapon used by the U.S. military in their war in Vietnam that causes defects at birth, which he was constantly exposed to during wartime.

Vui added in addition to the abnormal bulging of his face, his son suffers ailments and aches which also destroy his life.

Despite his constant mental torture and obsessive fear of appearing in public, Hien began to work as a lottery ticket peddler to help support his family as he entered teenage years.

His livelihood was far from easy, though. He encountered numerous difficulties early on.

Scared away by his face, few customers wanted to buy his tickets. Young children even burst out crying at the sight of him.

Hien later ventured out of his neighborhood to sell the tickets at a local tourist wharf, hoping to draw more sympathetic, supportive customers. His hope was realized as many tourists there became his customers.

Hien’s expanding clientele incensed other lottery ticket peddlers as they lost many of their customers to him.

These malicious rivals then told tourists not to buy tickets from Hien as he was notorious for money snatching.

Hien found out about this rumor, as it resulted in a considerable drop in his daily sales and suddenly negative reactions from tourists.

The man then desperately tried to explain to potential customers that he was not a money snatcher, but he faced a lot of difficulty because of his speech impairment.

Frustrated, Hien moved to a local park where he wrote his name on his table and bicycle and electricity posts nearby in a desperate attempt to deny the false accusations.

It was there that he met his non-human friends, sparrows and other kinds of birds which gather around him for the rice that he feeds them every day and the love he dotes on them since.

His innocent smiles during those rare moments of joy and his gentle nature began to endear him to passers-by and draw customers.

Hien uses all the money he earns to help his stepmother tend to his 76-year-old sickly father and care for those who are even more unfortunate than him.

“Hien is so gentle and has a ‘civilized’ way of living. Despite being uneducated, he is always neat and never bothers anyone,” Hien’s stepmother said.

“I’m endeared to him for all the misfortunes he has gone through."