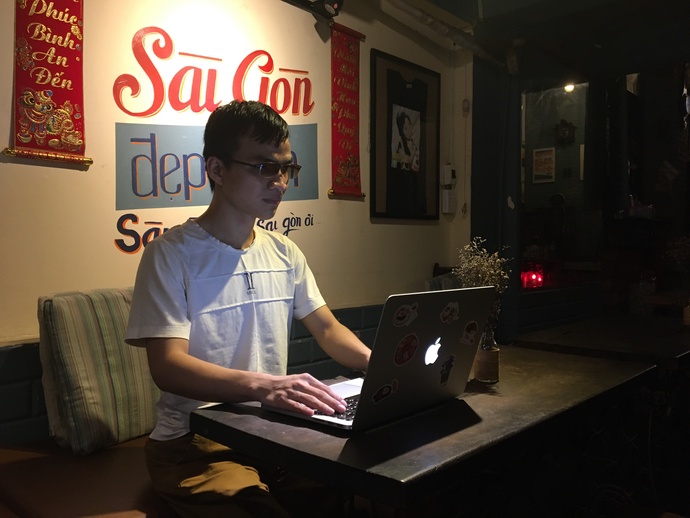 Offering transcription services of mint quality, ScriVi is an initiative led by visually-impaired youth that strives to provide decent-paying work for disabled people in Vietnam, who are struggling in a job market rigged against them from the start.

ScriVi is currently a collective of 19 blind and visually impaired transcriptionists who take on assignments from reporters, writers and research initiatives all over the world.

ScriVi’s story started two years ago from a series of encounters between Bui Thi Thanh Tuyen, a PhD candidate in social work at the University of Illinois Urbana-Champaign in Illinois, United States, and aspiring youths with disabilities in Vietnam.

In 2018, as she interviewed some 30 students with disabilities to collect material for her PhD dissertation, Tuyen was struck by multiple stories of unjust recruitment.

Despite proving sufficient competency, disabled youth in Vietnam can still be booted from the recruitment process as soon as the employers see their conditions stated on the health certificates.

“They told me that all they want is two months to try out for the job. Had they had that chance and failed it, they would not feel indignant,” Tuyen recalled.

Fast forward to 2020, Tuyen was allotted a US$600 fund to transcribe her 2018 interview tapes. She immediately thought of commissioning Nghi, a part-time transcriptionist with visual impairment that she once met in Hanoi.

Nghi took the job and turned in excellent work, which gave Tuyen all the more confidence in her vision of a new project: Researchers can have their transcription work done, while disabled youths get fair compensation for their expertise.

In November 2020, ScriVi was officially set in motion, with Tuyen as the mentor, while Nguyen Thanh Vinh, 27, and Nguyen Phuong Anh, 23, two youths with visual impairment, serve as the coordinators.

As the team is dispersed in various locations in Vietnam, Vinh and Phuong Anh found a way to get the whole structure working on digital platforms.

According to Vinh, new commissions are announced in a messaging group for transcriptionists to sign up. Subsequently, members will get listen-only access to the tapes via Google Drive, and their completed transcript, once done, must be sent to Tuyen or Anh for review before handing in to customers.

Each hour of tape in Vietnamese would take a member of ScriVi around 7-8 hours to unravel, or even more if the sounds get muzzled from noise, overlapping speeches or inconsistent volume.

For conversations in Vietnamese that use English words, members are required to note the timestamps down and refer them to Tuyen or Vinh – the most experienced transcriptionists in the group – for answers.

However, the most challenging obstacle part of the work lies in the proofreading.

Normally, the job proves a piece of cake for Tuyen, as she, a sighted person, can simply use the built-in tool in Microsoft Word to find the errors.

Yet, a person with visual impairment like Anh has to go extra lengths, using screen reading software as of VoiceOver on MacOS or NVDA on Windows to hear every character in the text before correcting errors.

Bookkeeping is also deemed a conundrum for ScriVi, as spreadsheets have never been a strong suit of workers with visual impairment - even for the most adept with Microsoft Excel like Vinh.

Most of this work falls on Vinh and Anh, but the two decided to take zero management fees in order to give their transcriptionists better compensation for their hard work.

As young workers with disabilities themselves, Vinh and Anh see their work at ScriVi as a means to help their community get fair treatment in a job market that often works against them.

Within just a few months from their launch, ScriVi has already made themselves known for a level of professionalism and thoroughness that is matched by none other on the market.

Customers coming in contact with the team would receive details on all the nooks and crannies of the process, including post-service support and information and security. Otherwise, they can just leave a comment on ScriVi's Facebook page to get their inquiries diligently answered by team members.

Vinh talks about ScriVi with lots of zeal as he believes that the project is an opportunity for persons with disabilities to self-empower. The scope of this project might stay small, but it must operate with sustainability so members with disabilities can equip themselves with new skills, which in turn increases their self-confidence and reinforces the position of the community in the eyes of potential employers.

For their future plan, ScriVi is working to extend their service to transcribing audio in English and translation. The demand is there but due to the lack of human resources with high capacity, ScriVi could not provide it just yet.

The group did consider the lightning-speed development of artificial intelligence (AI) too. While many key players such as Google or Microsoft (for English) and FPT (for Vietnamese) have entered the race of speech-to-text solutions with products of high accuracy, ScriVi believes that they can still develop in their own niches, namely transcription of local Vietnamese accents which are very diverse and do not receive as much research and investment.

With their commitment to a high service standard, ScriVi is earning for themselves a group of loyal customers, one of them is Hanoi-based journalist Le Giang Lam.

“It is essential for those working in journalism like myself that I can capture the speaker’s emotion and attitude expressed through words like “umm”, “uh”, even swearwords and they can do it all. They can also transcribe other sounds from the environment like sounds of doors opening or the sound of plates clanking.”

Looking at what ScriVi has been achieving so far, Tuyen couldn’t hide her pride in Vinh, whom she entrusted with the leadership position right from the early days.

“In the time that I am busy with my thesis, Vinh has taken the lead to get things done — from planning to contacting every single member. I only need to put things forward, he would know how to get them done.”

For Tuyen, the story of Vinh and of ScriVi are solid examples, proving how brightly persons with disabilities can shine in the labor market provided that they are judged fairly and accurately.

“The only thing they need is an opportunity.” Vinh holds a firm belief that communities of people with disabilities need to be more decisive to prove their real personal values in the labor market.

Vinh holds a firm belief that communities of people with disabilities need to be more decisive to prove their real personal values in the labor market.

“At ScriVi, we understand that the lack of opportunities for people with visual impairment is not necessarily the intention of anyone in particular, but sometimes it is only a result of the hesitance caused by inadequate relationships or those relationships between people with visual impairments and sighted ones are not close enough, preventing deep understanding between the two from growing.

“So we believe that instead of complaint, we better build the foundation of such healthy relationships to develop by proving our true capacity.” Vinh wrote in his first post on ScriVi Facebook page.