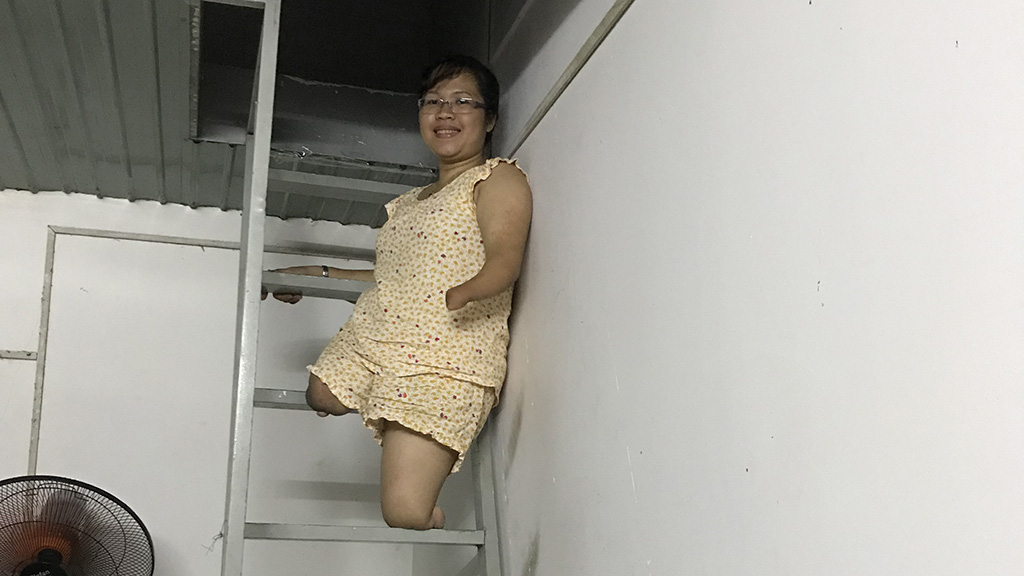 Thirty-five-year-old Tran Thi Hoan has overcome the physical disabilities brought about by her mother’s exposure to Agent Orange and now thrives as a technician at a hospital in Ho Chi Minh City where she happily shares her love for life with those around her.

Hoan’s parents had no trouble picking out her name when she was born. Hoan, Vietnamese for joy, was the perfect fit for a daughter they hoped would thrive despite being born with only one arm and no legs.

And she did thrive, growing up to become a successful entrepreneur, an IT technician at Ho Chi Minh City’s Tu Du Obstetric and Gynecological Hospital, and a well-known orator who travels the country to give speeches in support of those impacted by Agent Orange.

Agent Orange has shattered Hoan’s family. The deadly chemical caused the deaths of two of her siblings - her younger brother from a hernia of his abdominal wall as a baby and her older sister from cancer. Of her two living siblings, one suffers from a severe disease.

Hoan was raised at the Hoa Binh Peace Village – a center sponsored by the Tu Du Obstetric and Gynecological Hospital in Ho Chi Minh City which is dedicated to helping victims of Agent Orange.

Growing up in the village gave Hoan the opportunity to attend school and eventually finish college. But of course, finishing college meant it was time to say goodbye to her parents and, for the first time, lead an independent life.

“Everybody was afraid at first, but she proved to be stronger than most able-bodied people,” said Nguyen Thi Ngoc Phuong, a doctor at the Peace Village.

According to Hoan, that strength is derived from the people who cared for her at the village – the Catholic sisters and teachers who supported her, a ‘mother’ named Ngoc Phuong, a ‘grandma’ named Hai Chung, and an old Australian couple who showered her with unconditional love.

Despite having just one arm, Hoan is thankful for the life she was given and uses that gratitude as inspiration for the speeches she has delivered in the U.S., Australia, and South Africa to spread awareness of and garner support for victims of Agent Orange.

Her activism is proudly highlighted in Ho Chi Minh City’s War Remnants Museum, where a copy of a letter she wrote to U.S. President Barack Obama describing a speech she gave regarding Agent Orange is displayed.

This simple piece of paper is merely a small representation of the massive efforts she’s put in to helping others who have suffered Agent Orange.

Though Hoan is thankful for her upbringing, growing up as a woman with a disability wasn’t easy.

“I was away from my family for the first time. I spent a lot of time crying,” she said.

“I also fell down a lot when they first gave me prosthetic artificial legs. I had bruises all over and was often made fun of by other students at school because I was the only disabled student. It was my parents' encouragement that kept me going.”

In fact, it was her parent’s love that inspired her to finish school and spread her wings behind the confines of the Peace Village.

Hoan embarked on life as an independent woman, navigating the world as a disabled person.

Some things were a struggle – finding accommodation, purchasing furniture, managing finances, and cooking – but soon she overcame those difficulties and began to thrive.

Even setbacks, like not being accepted to medical school because of her disability, were merely small barriers in her path to success, forcing her to make the decision to switch to information technology and eventually secure a job at Tu Du Hospital.

“I always have to love myself and I must never give up hope,” she said.

Hoan currently lives in Cat Lai Ward, Thu Duc District, about 12 kilometers from her workplace in a large house where the tenants all live like one big family with a common space used for eating and chatting together.

Her favorite meal to cook is banh xeo – a crispy Vietnamese pancake made with shrimp and bean sprout which she can prepare ‘singlehandedly’.

“You have to see how she cuts the veggies and blends the flour,” said Hue, one of Hoan’s housemates.

“She never allows any one of us because she thinks we’re not skilled enough.”

Hoan’s house isn’t the most handicap-accessible place in the world. Most of her belongings are kept in a loft area accessible only by a flight of stairs.

“I’ve climbed these stairs for six years. I’m better than Tarzan,” she said.

“When I first came here, I was even able to push a huge metal wardrobe up the stairs.”

Now, Hoan’s biggest obstacle is no longer her disability or the stairs, it’s caring for her parents.

In March, her mother was hospitalized and her father has been undergoing chemotherapy for liver cancer at the University Medical Center Ho Chi Minh City.

To help pay for her parent’s medical fees, Hoan sells fruit and mushrooms online, shipping each order herself on a three-wheeled motorbike.

“She was disabled from birth and we were all worried about her,” her father said.

“But she turned out to be the least of our worries. Now she takes care of us.”