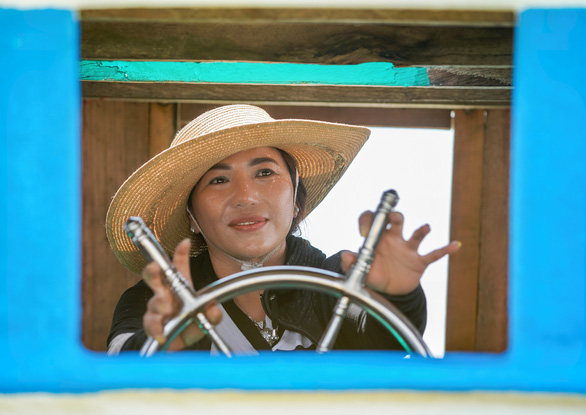 A woman who sails a ship on Vietnam's southern seas

She is known as a 'steel rose' of Vietnam’s southern seas. Breaking down the long-held belief that women bring bad luck for voyages, she commands an all-men fishing crew.

She is Nguyen Thi Phuong, 50, from Tan An Commune, Ngoc Hien District, located in the southernmost Vietnamese province of Ca Mau.

Amidst indistinguishable voices blending in a walkie-talkie of a fishing boat bobbing on the sea, a woman’s voice cut through. She asked whether they could catch any big fish and need any help.

Fishermen told her about the boat’s conditions as well as the updated market prices of fish and squids.

“It is big sister Phuong. For this trip, she heads to Hon Khoai Island. She cares for us very much. There are not many fisherwomen like her,” said a helmsman.

Rach Goc is one of Ca Mau Province’s three biggest estuaries. From the center of Ngoc Hien, water flows through mangrove forests to the southern part of the East Vietnam Sea, bringing fishing crews from Binh Dinh, Phu Yen, Ben Tre, and Kien Giang to the country’s richest fishing ground.

For every tide, there are hundreds of ships going in and out Rach Goc Estuary to sell seafood and prepare for the next trip.

Hua Minh Quang, head of Tan An Commune Women’s Union, said the local sea was home to fierce women. Among all, Nguyen Thi Phuong is the most respected, not only because she embraces credibility but also dares to sail a ship.

After the devastating storm Linda in 1997, many ships never returned. The rest were severely damaged. The southern fishing grounds witnessed a fall in the number of fishing boats.

At the time, Phuong rowed a wooden boat through mangrove forests to buy shrimps and fish from farms to retail at the district market. After her husband’s death, Phuong became the family’s breadwinner.

The small business earned little profit while the competition among fish traders was fierce. In 2007, Phuong withdrew and opened her own kiosk at the market. Her suppliers were mostly off-shore fishing crews.

She was favored by them for being generous and kind. Thanks to good word of mouth, more and more fishing crews started to save their best catches to sell to Phuong.

However, due to the distance and sluggish traffic, seafood delivered from Rach Goc Estuary turned bad when it reached wholesale markets and restaurants.

In 2017, when a section of Ho Chi Minh Highway connecting Ca Mau Province’s Nam Can District to Dat Mui Commune across Rach Goc was opened, the market for Rach Goc seafood was unlocked.

“I have to buy seafood right after the catch, preserving and delivering it right away to consumers for the highest possible prices,” recalled Phuong.

She asked for advice from veteran fishermen to build her own boat in order to procure seafood offshore and provide fuel for fishing ships.

She finally acquired a ship equipped with all necessary equipment for a voyage of hundreds of nautical miles. However, who would ride it was another question.

Phuong needed someone who knew the sea well enough to avoid entering neighboring countries’ seas. The daily pay of VND500,000 (US$22) was not enough to attract a professional helmsman.

She decided to operate the ship by herself as a result.

Fishermen believe that letting women board their ships before departure will bring bad luck.

In Phuong’s case, she is the commander, knowing stormy days are real challenges for even professional helmsmen who call the seas their homes.

Following her are seven men.

Together they sail to waters around the islands of Con Dao, Bai Can, Nam Du or Phu Quoc, no matter how the weather is, following good catches.

“My first trips were arduous," she said.

"I could buy nothing then.

"However, I refused to buy seafood from illegal fishing boats.

"Border guard and seafood resource protecting forces showed me which fishermen I could rely on.

“That helped a lot. I could buy fresh, legally caught, and well preserved seafood.

"They, conversely, had enough fuel and food for long-day trips without returning to the shore.”

As Phuong got used to the sea, her companions started leaving.

They prefer working on fishing boats to share profits to receiving fixed wages from her.

With fewer crew members, she still can manage a 30-ton ship, riding dozens of nautical miles to receive and deliver fresh catches to the shore.

Phuong said she feels most worried when the night falls.

“It is dangerous," she said.

"Only me and the angry sea, how can I overcome it?

"There is a fight within me to become a stronger human being and to dare to conquer storms and waves.

“In fishing grounds, there are all men.

After graduating from college, Phuong’s two daughters returned to Rach Goc District to assist her business.

“They motivate me, making me feel safe whenever I go offshore,” she said.

Phuong is now one of the most well-known seafood traders in Vietnam's southern fishing grounds.

A decade of sailing a ship makes Phuong a stronger woman, more than ever.