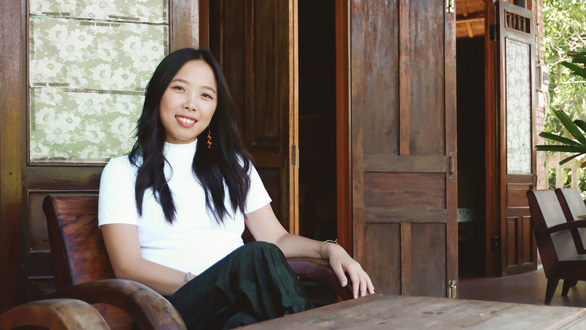 Since returning to Vietnam after spending two years studying art therapy in New York under the prestigious Fulbright program, 32-year-old Nguyen Huong Linh has made it her mission to help Vietnam’s marginalized communities cope with trauma.

Linh, who completed her undergraduate studies at Korea National University of Arts in 2014, had long dreamt of connecting her passion for art with gender activism and art therapy.

Shortly after graduation, Linh began introducing the concepts of body awareness, gender equality, and reproductive health to children in Vietnam through a series of 12 books she authored and illustrated herself.

Her dream was lifted to new heights in 2017  when she was awarded a Fulbright scholarship to a Master’s program in art therapy at New York’s School of Visual Arts.

Upon returning to Vietnam, COVID-19 restrictions forced her to spend two weeks at a centralized quarantine facility in Hanoi before she could enter into the community.

Rather than spend those two weeks sitting idly, Linh launched MAI:tri - an online space which provides one-on-one therapy consultation and self-reflection through art.

Her first ‘customers’ were her roommates at the facility.

The positive responses she received from her roommates at the quarantine facility have motivated Linh to continue down the art therapy path, inspiring a blog and a series of videos on the topic.

For a time, Linh ran MAI:tri out of Ho Chi Minh City where she hosted therapy workshops for vulnerable demographics, including underprivileged teens, medical practitioners, and social activists who face mental health issues.

“I’ve been trying to re-adapt to Vietnamese culture and have spent a lot of time reflecting on what I learned during my time abroad. I’ve realized that the various presumptions and stigmas that surround mental therapy are a hindrance to the growth of the discipline in Vietnam,” Linh explained.

Linh is facing these presumptions and stigmas head-on.

She now runs MAI:tri out of Hoi An City in the central Quang Nam Province in order to broader her customer base both in the city and in nearby Da Nang City.

She also hosts clients from across Vietnam in online consultations, and prides herself on offering LGBT-friendly services.

When she’s not busy with MAI:tri, she’s focuses her attention on a charity which funds consultations for young women, cancer patients, and survivors of abuse.

In early 2021, after the COVID-19 pandemic and the historic flooding in Vietnam’s central province’s took massive physical and mental tolls on her fellow Vietnamese, Linh initiated a series of 20 free webinars that focused on holistic healing practices, including yoga, art therapy, movement therapy, creative writing, and breathwork, to over 3,200 participants.

According to Linh, continuous social distancing, a lack of human connections, and work/study burnout, has left many feeling dejected, dissociated, and hopeless.

Daily depressing COVID-19 updates have helped breed fear and discord in communities. Such negative feelings have taken negative tolls on the health of many.

“Finding a mental health therapist is as important as finding a doctor for our physical diseases,” said Linh.

According to Linh, the stigma around mental health in Vietnam is gradually easing, a phenomenon she sees as ‘uplifting’ for Vietnam’s public health outlook during such tumultuous times.

She strives to offer art as a self-care method which can help people observe their emotions in a more intuitive manner compared to the usual dialogue approach.

“With the help of Linh, I was able to awaken my inner therapist and compliment and guide myself through the traumatic childhood memories without fear or constraint,” a participant in Linh’s webinar said.

For the time being, Linh is working on a new series of workshops for Ho Chi Minh City residents who are struggling with long days spent inside amidst social distancing.

The event has gathered nearly VND55 million (US$2,400) which will be donated to the city’s needy through local charities.